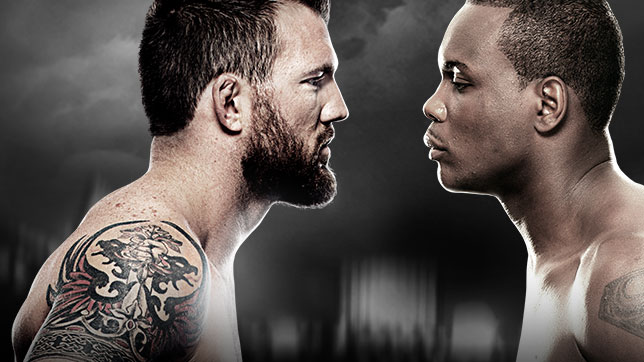 Wander in the darkness no longer boys and girls. It’s time for another New England edition of the Downes Side!

This week, the Nostradamus of MMA travels to Bangor, Maine for UFC Fight Night. Well, I’m not actually traveling to Maine, but I will eat a lobster roll for solidarity’s sake. While the fine people inside the Cross Insurance Center may not get to see me, they do get to see a clash between two top 10 light heavyweights. Ryan “Darth” Bader tries to run his win streak to three in a row against hot prospect Ovince Saint Preux. In the co-main event of the night, Ross Pearson and Gray Maynard will try to climb up the crowded lightweight rankings. Who needs a Paul Bunyan statue? It’s fight time!

We open up in the featherweight division with Thiago Tavares and Robbie Peralta. Tavares made his UFC debut all the way back in 2007. It was a magical time when Guitar Hero was all the rage and a 21-year-old Danny Boy was enjoying his first sips of this magical elixir called “beer.” Primarily a grappler, Tavares steps into the Octagon for the first time since November 2013, when he locked up a first-round submission over Justin Salas. Robbie “Problems” Peralta doesn’t worry about going to the ground. He throws power punches and has 13 career KOs to show for it. He made his UFC debut back in November 2011. It was a magical time when your burnout roommate graduated to playing Rock Band and a soon to be 26-year-old Danny Boy was still drinking this magical elixir called “beer.”

Tavares has the clear advantage on the ground, but there’s no guarantee he can bring it there. His takedowns normally come from willpower rather than technique, and it shows in his 39.02% conversion rate. Peralta’s wild strikes leave him open to the takedowns, but his athleticism will give him the ability to recover. In a stand-up fight, Peralta beats Tavares to the literal and figurative punch and picks up the unanimous decision.

SHAWN JORDAN VS. JACK MAY

We move to heavyweight for Shawn Jordan and Jack May. A former fullback at LSU, Jordan has dropped his last two fights by first-round knockout. On the bright side, he’s still had more professional success than JaMarcus Russell. Jack “The Outlaw” May doesn’t have a national championship, but he does have six first-round knockouts. He also has the same amount of career wins as JaMarcus Russell.

Heavyweight fights are like drafting JaMarcus Russell with the first overall pick -- you just never know what you might get. Both fighters have KO power and have been knocked out in the past. As a result, you have to choose the fighter with the best odds of connecting first. With his 6’8” frame, May will control the distance long enough to avoid Jordan’s bull rush. After he sidesteps the charge, one of his punches will sneak through and he takes this one by first-round TKO.

We drop down to welterweight for Seth Baczynski and Alan Jouban. Stepping inside the Octagon for the tenth time, the “Polish Pistola” Baczynski has dropped three of his last four and desperately needs a win here. That won’t be such an easy accomplishment against Alan Jouban. A skilled striker, the former RFA champion hopes his aggressive style leads to a successful UFC debut.

Baczynski may not have the same technical striking prowess, but he knows how to win MMA fights. In addition to being a bit undersized, Jouban often leaves himself open to counter attacks. Baczynski doesn’t have the best offensive wrestling (he converts takedowns at a less than ideal 14.71% rate), but he knows how to grind. He’ll push Jouban against the fence and negate the explosiveness. Jouban will land some shots, but the pressure will slow him down as the Polish Pistola grabs the unanimous decision.

We take a step up to the middleweight division for Tim Boetsch and Brad Tavares. Once in the top five in the 185 lb ranks, Boetsch has dropped three of his last four fights. Contrary to popular belief, “The Barbarian” didn’t earn his nickname because he was a big fan of the 1975 television series starring William Shatner (a common mistake). It’s actually in reference to his rugged fighting style that’s propelled him to seven KO victories. Tavares is an all-around fighter who had his five-fight win streak snapped by Yoel Romero in April. All but one of his nine UFC fights have gone the distance, but he does present challenges both on the feet and on the mat.

Tavares may not finish fights, but Tim Boetsch hasn’t done it either. Outside of that Comeback of the Year performance against Yushin Okami, Boetsch hasn’t stopped an opponent since I saw him beat Reese “Old Man” Shaner at a regional show inside the Wisconsin State Fair Park. Expect Tavares to move in and out and pick his shots wisely. A frustrated Boetsch will force the engagement, but only find himself with his back on the mat. Tavares by unanimous decision.

That brings us to the co-main event of the night. A former number one contender for the lightweight title, Gray Maynard has something to prove. After two consecutive first-round losses to Nate Diaz and TJ Grant, many have started to assume that the 34-year-old’s best years are behind him. Looking to add to that decline will be Ross “The Real Deal” Pearson. A Sunderland native who now trains out of Alliance MMA in San Diego, Pearson has had his own share of bad nights. After a no contest against Melvin Guillard back in October, Pearson wound up on the wrong end of one of the most controversial decisions in MMA history when he faced Diego Sanchez in June.

Even though Maynard doesn’t rely on his wrestling now as much as he did in the past, he’ll still be a threat for a takedown. The big question here is whether or not his chin will hold up. Pearson doesn’t have the best offensive grappling, but he’s quite strong defensively. He also has the more technical striking and superior footwork. As Maynard comes in, Pearson will slide away and connect on a counter hook or uppercut. The Brit may not be known for his power striking, but you don’t need power when you have accuracy. Pearson takes this by second round knockout.

Time for the main event! Ryan Bader burst on to the UFC scene by winning season eight of The Ultimate Fighter back in 2008. It was a magical time...oh forget it, you get the point. Since then, he’s evolved from being one-dimensional to someone who has blended his wrestling pedigree with boxing to succeed in MMA. A perfect 4-0 in his UFC career, Ovince Saint Preux makes a big jump in competition. A win here can cement his position in the upper echelon of the light heavyweight division.

This is an incredibly hard fight to pick. Bader clearly has the experience and wrestling base to control Saint Preux, but he also leaves defensive gaps. People like Glover Teixeira and Lyoto Machida have exploited those gaps, but can OSP? I say yes. Bader may be able to wear Saint Preux down against the fence and grind him out, but he just leaves too many openings for OSP to land power strikes. OSP jumps up to hang with the big boys with a third round TKO.

That wraps up another Downes Side which is nicer than vacationing at Martha’s Vineyard. Follow me on Twitter @dannyboydownes. Also, don’t forget to leave your own quandaries, predictions, sycophancies or favorite EMCC course on the page here. Anyone else want to sign up for Chemistry for Everyday Living? It just sounds so practical.