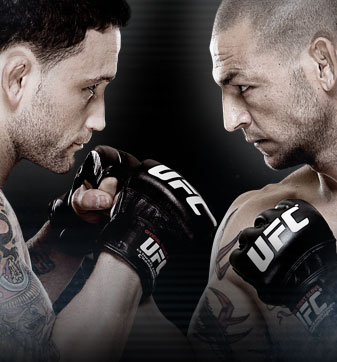 That’s right boys and girls, it’s time for another Texas-sized edition of The Downes Side! While I can’t guarantee it’ll be as entertaining as Walker Texas Ranger, I think we all know it’ll be a lot better than Texas toast.

Regardless of how you feel about carbohydrates, the Ultimate Fighting Championship fits well into any paleo diet lifestyle. Live from the Frank Erwin Center in Austin, Texas, Cub Swanson can punch his ticket to a featherweight title shot with a win over Frankie Edgar. In the co-main event of the night, lightweights Bobby “King” Green and Edson Barboza try to differentiate themselves in a stacked 155-pound division.

We open the main card in the lightweight division with Matt Wiman and Isaac Vallie-Flagg. A UFC mainstay since 2006, “Handsome” Matt Wiman fights for the first time since a first-round TKO loss to TJ Grant in January 2013. After winning his UFC debut against Yves Edwards, Vallie-Flagg has dropped his last two fights.

Wiman has the edge in the pure grappling department, but I don’t think he’ll use it here. After a long layoff, he’s going to want to mix it up and he has the perfect opponent to do so with. Neither one has demonstrated a ton of KO power in the UFC, so expect this one to be a three-round slugfest. In a fight like that, Vallie-Flagg has the superior conditioning and durability. The back and forth brawl takes its toll on Wiman late in the fight and Vallie-Falgg wins by third-round TKO.

We drop to flyweight for Joseph Benavidez and Dustin Ortiz. After losing his second opportunity at the flyweight title, Joseph Benavidez bounced back with a first round submission win over Tim Elliot. Dangerous everywhere, he owns KO and submission wins inside the Octagon. Owning a 3-1 UFC record, Dustin Ortiz faces the toughest test of his career.

Joseph Benavidez is a man without a country. He’s shown dominance in the 125-pound division, but doesn’t seem to have the answer for champion Demetrious Johnson. Expect that trend to continue. Ortiz has been able to beat opponents by slowing things down and wearing them out. He won’t be able to do that here. Benavidez’s speed and athleticism will be too much. He’ll beat Ortiz to the punch consistently, and by the time the second round comes, he’ll finish the takedown and search for his go-to guillotine. Benavidez by submission.

We jump up to heavyweight for Jared Rosholt and Alexey Oliynyk. An All-American wrestler at Oklahoma State, Rosholt has used that pedigree to put together an undefeated UFC record. The most highly-anticipated Russian product since those adorable nesting dolls, Oliynyk finished Anthony Hamilton with a first-round neck crank submission in June. 38 of his career wins have come via submission, which kind of makes me hope he has nesting dolls of every opponent he’s ever tapped out.

I wasn’t sold on Rosholt’s ability to compete in the division initially. He has a tremendous wrestling game, but shows a lot of gaps in other areas. Those deficiencies still exist, but the win against Soa Palelei proved that he can still beat strong fighters in the division despite being one-dimensional. A striker with KO power beats Rosholt, but Oliynyk isn’t that guy. He game rests on controlling the fight on the ground and he won’t be able to do that here. Rosholt by submission.

We return to flyweight for Brad “One Punch” Pickett and Chico “King” Camus. After trading off wins and losses his last few fights, Pickett could really use a win after losing to Ian McCall in July. An athletic, rangy striker, Camus also looks for a victory after losing a decision to Chris Holdsworth at UFC 173.

Camus’s biggest enemy in the cage is himself. He often makes tactical errors that cost him a win. Pickett is a skilled veteran and he’ll be waiting for any slip up to capitalize. In the striking department, Pickett has the power advantage, but Camus has superior footwork and combinations. As long as he fights smart and keeps Pickett at a distance, Camus returns to the win column with a decision win.

We move to lightweight for the oddsmakers’ (and by oddsmaker I mean me) favorite for Fight of the Night. Currently riding an eight-fight win streak, Bobby “King” Green beat former number one contender Josh Thomson his last time out. Seventeen of his career wins have been finishes, and he’s showcased them in the Octagon. A dynamic Brazilian Muay Thai striker, Edson Barboza showed that KO power by beating Evan Dunham in the first round in July.

Barboza can end the fight at any time. Green definitely has knockout potential, but lacks the same destructive power as his opponent. Where he far exceeds his opponent, however, is in defense. Barboza may have a better chin than people give him credit for, but he does have defensive lapses. Expect Green to survive Barboza’s early aggression and start to work his game plan. He’ll mix his strikes with some takedown attempts that will limit the Brazilian’s willingness to attack. Green’s multi-level attack gives him the decision win.

Time for the main event! Former lightweight champion and featherweight number one contender Frankie Edgar may not be the next in line for the title, but he can certainly play the role of spoiler. After six straight wins over fighters like Jeremy Stephens, Dennis Siver and Dustin Poirier, Cub Swanson says that he’ll be the next to face Jose Aldo if he wins here.

Cub Swanson is on a roll the last couple years. When he came to the UFC from the WEC many thought he’d be relegated to gatekeeper status. Now, he’s on the cusp of a title shot. Even with all that momentum, it’s hard to count out Frankie Edgar. All he does is win, win, win no matter what. Edgar is at his best when he can confuse opponents with footwork. His irregular movements keep many guessing, and Cub Swanson will be another member of that club. Swanson will have some success, but won’t be able to take charge. Edgar by unanimous decision.

That wraps up the best Downes Side this side of the Rio Grande. Follow me on Twitter @dannyboydownes. Also, don’t forget to list your own predictions, observations, elucidations and favorite Texas-based television shows on the page here. Beavis and Butthead was close, but I’m sticking with Wishbone.