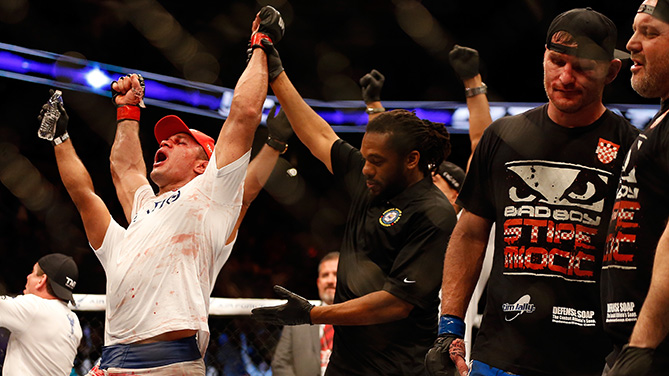 Junior Dos Santos may not hold a heavyweight title belt anymore, but he fought with the heart of a champion Saturday night at US Airways Center in Phoenix, Arizona, surviving a spirited effort from Stipe Miocic to fight his way out of an early hole and win a punishing five-round unanimous decision.

Scores were 49-46 twice and 48-47 for Dos Santos, who returned to active duty for the first time since losing his rubber match to current heavyweight champion Cain Velasquez in October of 2013.

After a brief feeling-out process, Dos Santos fired off a quick 1-2 that Miocic avoided, and the Ohio native closed the distance and locked his opponent against the fence. Dos Santos got loose and avoided a couple takedown attempts, but he ate some leather in the process. Midway through the round, Dos Santos landed his first significant shot, a flush left hook, but Miocic responded with hard shots of his own, jarring the Brazilian.
In the second half of the round, Dos Santos began to find his range a bit more, but Miocic would turn his head at the moment of impact to dull the effects of the shots, and soon he drew first blood, opening a cut on the chin of “Cigano.”

Miocic continued to press in round two, and Dos Santos began bleeding from over the right eye as the American walked him down. Dos Santos was still throwing hard, but his punches looked more desperate than planned, as Miocic shook off all the incoming fire and delivered shots that Dos Santos wasn’t taking too well anymore. In the final 30 seconds, Miocic scored his first takedown, not a good sign for the former champ. 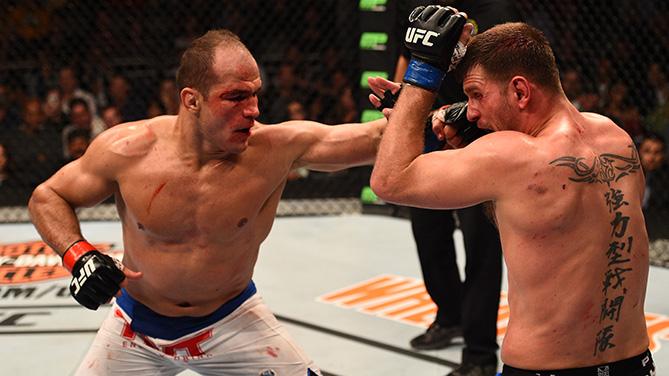 With Miocic slowing down in round three, Dos Santos got busier, and he landed several hard shots before dropping his opponent with a left hook at the midway point of the round. The knockdown didn’t spell the end for Miocic, who was now bloodied and battered, but it gave JDS the confidence he needed to keep the positive momentum going.

Dos Santos was having another strong round in the fourth, as he threw off Miocic’s takedown attempts and landed several hard punches. But Miocic was far from done, as he rattled JDS with a series of right hands. With a minute left though, Dos Santos surged again, shocking Miocic with a quick takedown that likely sealed the round for him.

Somehow Dos Santos found the energy to go on the offensive in round five, and while Miocic continued to move forward, his activity level couldn’t match that of “Cigano,” who kept pressing, even after eating some hard blows to the face from his equally courageous foe. In the final minute, Miocic emptied his tank in search of victory, rallying furiously, but this one would go to the judges.

With the win, the number two ranked Dos Santos ups his record to 17-3; the number four ranked Miocic falls to 12-2.