Junior Dos Santos looks like one of those people who would be good at anything he tries. And in the time since his last bout against Stipe Miocic in May 2017, the former heavyweight champion has become quite the diaper changer for his son, Bento.

“I’m a professional already,” laughs Dos Santos. “I’m almost doing those YouTube videos teaching people how to do it.”

Spending time with 16-month-old Bento and his wife Isadora was the bright spot of a rough post-Miocic stretch that saw Dos Santos flagged for a USADA violation and put him on the shelf. But the megawatt smile that has become almost as much a part of “Cigano” as his punching power returned in April when it was determined that Dos Santos, along with fellow UFC fighters Rogerio Nogueira and Marcos Rogerio de Lima, had used contaminated supplements and did not knowingly take banned substances.

Just like that, Dos Santos could breathe again. And the fans that supported him and said, “Not Junior” when the news of the positive test first broke, could do the same. That support meant a lot to JDS.

“That was a really important part of this whole situation I went through,” he said. “Man, I’m a blessed guy because I had so many people supporting me and telling me that I will show them the truth. And thank God, I was able to show the real truth. Because I was nervous. After six months of investigation, they weren’t finding a resolution for the case, so I was worried. I don’t do these kind of things, and to be going through that process was very, very bad. It was a nightmare. But to have the support of the people and having them believing in me, that was one of the things that made me strong and helped me keep going.”

All the while, Dos Santos stayed in the gym, waiting for the day when he would be cleared to return to the Octagon, refusing to think of any other outcome to his case.

“I didn’t stop training, because in my mind, they would find the truth very fast about me and they will release me to fight again and I would take the first fight I could,” he said. “So that’s what I did. After nine months of investigation, they set me free to fight again and as soon as the UFC offered me this fight against Blagoy (Ivanov), I said yes. That’s what I need, that’s what I want. So here I am, ready to be back in the cage and I’m happy for that.”

This Saturday, Dos Santos returns for a main event in Boise against Octagon newcomer Blagoy Ivanov, long considered to be one of the best heavyweights not signed to the UFC. Ivanov is a tough out, but it could have King Kong and Godzilla on the same night and Dos Santos would have taken the fight. And though he’s alternated wins and losses in seven bouts since 2012, he doesn’t feel that a benefit of the time away was giving his body a rest from the rigors of being one of the top big men in the game.

“Not this way, no,” he said. “I don’t need to give my body a rest. I’m 34, I’m feeling great. And even though my last fight was a tough fight for me, it wasn’t a big deal. It was only a punch that connected well. So I didn’t need this type of rest. But it was special for me to be at home, to be able to spend more time with my family. My son was born a few months before this whole situation, so to be able to spend time with him and help my wife take care of him, it was a blessing for me. There’s always a positive side to everything in our life, and that’s how I like to see things.”

Dos Santos has always seen the positive side, and we can see it on his face. There’s a joy surrounding him that only leaves when it’s time for him to put his mouthpiece in and fight, and having him back in the Octagon is a good thing not just for the sport in general, but the heavyweight division in particular.

“We have some really tough guys in the division and now we have some young guys coming too right now,” Dos Santos said of his weight class. “This is the most dangerous division in every combat sport, so there’s a lot of excitement about the fights. Miocic was doing a good job as a champion until last weekend. When he lost the title, that was something incredible and unexpected. And when you become a champion, you become a target, so now we have a new target – Daniel Cormier.” 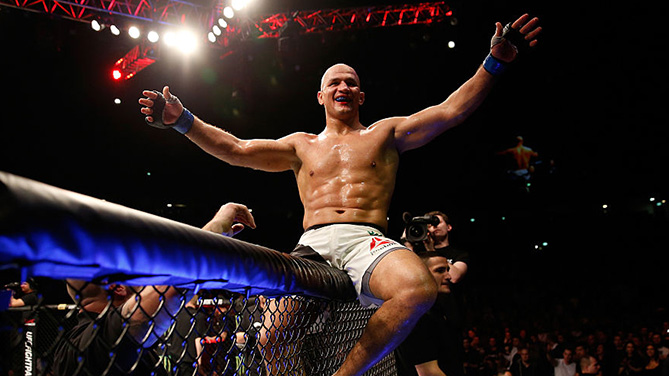 I ask Dos Santos, who held the crown from November 2011 to December 2012, if he liked being that target.

“Yes, of course,” he laughs. “When you are the target, you are the champion, so everybody wants to get a chance to beat you. No doubt, it’s a good place to be in.”

He wants to get back to that place as soon as possible. But before looking forward, I want to look back once more and wonder who was more excited when his return was announced – Dos Santos or the fans?