Dos Anjos Is Used To Taking The Hard Route

Rafael Dos Anjos operates with a sense of calm acceptance that makes you want to spend a weekend following him around, soaking up his teachings, hopeful to come away with a few insights you can apply to your own life and lessen the anxieties and worries.

Entering his co-main event pairing with Michael Chiesa this weekend in Raleigh, North Carolina, the 35-year-old Brazilian is in the midst of a four-fight stretch where he’s managed just a single victory, leading many to wonder if his tumble out of the Top 10 has begun. It’s the type of spot that would elicit tension and stress in many of his contemporaries, yet the Brazilian standout is decidedly nonplussed about the whole situation.

“I think God has a plan and when the time comes, everything will happen,” said Dos Anjos, who split a pair of appearances in 2019, submitting Kevin Lee in the fourth round of their main event showdown in May before dropping a unanimous decision to Leon Edwards two months later in San Antonio, Texas. “I will keep doing my job — being in good shape, maintain my work ethic — but only God knows.

“We make plans, but the final answers come from Him. I’ll keep doing what I do — fight hard, stay in good shape, keep my body injury-free — and whatever is next, only God knows.”

In addition to his faith, Dos Anjos is buoyed by the quality of competition he’s faced both during his current rough patch and throughout the vast majority of his career, as well as having endured an uneven stretch like this before.

Now well into his second decade as a member of the UFC roster, Dos Anjos was a .500 fighter through his first eight Octagon appearances, scoring a handful of solid victories and impressive performances, but coming up short against the toughest competition he faced. Over his next 10 appearances, the Orange County-based fighter posted a 9-1 record, capped by his sensational lightweight championship-winning victory over Anthony Pettis at UFC 185.

In the 10 fights since, he’s gone 5-5 across two divisions, successfully defending the title with a second win over Donald Cerrone prior to losing the belt and a second consecutive fight at lightweight, moving up to welterweight and winning three straight. Those initial triumphs in the 170-pound ranks elevated him into an interim title fight against Colby Covington, which became the starting point for his current run of less-than-satisfying results.

“I’ve never had an easy route in my life or my career — no easy fights, no easy routes,” said Dos Anjos, who, along with his wife Cris and two eldest boys, became United States citizens towards the end of last year. “I’ve always fought Top 10 guys and I think even though I’ve got a couple losses at welterweight, it’s to two guys who fought for the title and another guy in the Top 5 and I went the distance with all of them.” 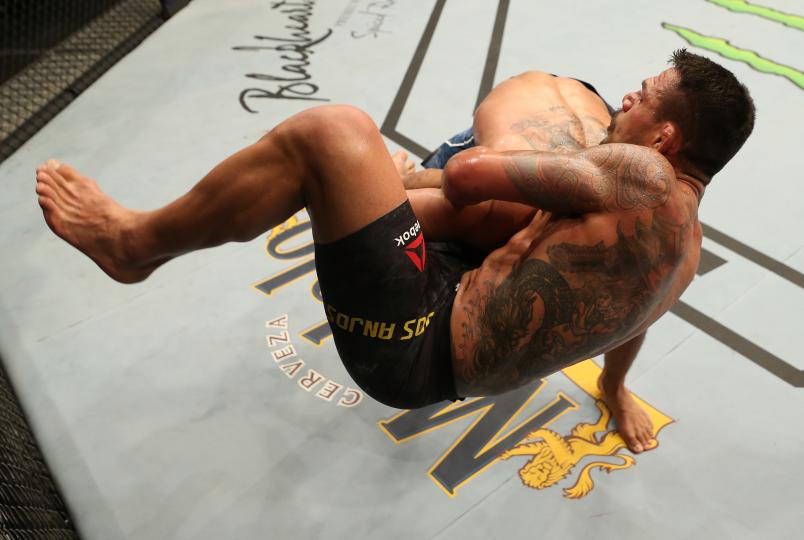 ROCHESTER, NY - MAY 18: (R-L) Kevin Lee takes down Rafael Dos Anjos of Brazil in their welterweight bout during the UFC Fight Night event at Blue Cross Arena on May 18, 2019 in Rochester, New York. (Photo by Michael Owens/Zuffa LLC/Zuffa LLC via Getty Images)

ROCHESTER, NY - MAY 18: (R-L) Kevin Lee takes down Rafael Dos Anjos of Brazil in their welterweight bout during the UFC Fight Night event at Blue Cross Arena on May 18, 2019 in Rochester, New York. (Photo by Michael Owens/Zuffa LLC/Zuffa LLC via Getty Ima

MORE FROM UFC RALEIGH: Fight by Fight Preview | Perez Fighting Like Job Is On The Line | Fighters On The Rise | Hill Reaching Her Peak

In between his losses to current champ Kamaru Usman and Edwards, Dos Anjos showed he can still be a force inside the cage, spoiling Lee’s debut in the welterweight division with a classic veteran performance. When Lee came out quick, Dos Anjos simply weathered the storm, picking his spots and keeping his powder dry until it was actually time to fire. As the lightweight contender began to fade, the Brazilian shifted his tempo, upping the pace and eventually submitting an exhausted Lee with an arm triangle choke with just over a minute remaining in the fourth round.

Larry Merchant called Joe Frazier a “truth machine” following his unanimous decision win over Muhammad Ali at Madison Square Garden on March 8, 1971, rightfully depicting Frazier as the kind of guy who would expose you if you didn’t step into the ring fully prepared for the punishing fight that was set to ensue.

Dos Anjos occupies a comparable role in the welterweight division, as his last four fights and this weekend’s bout with Chiesa illustrate.

“If the UFC sees me that way, I have no problems with that,” he said. “I know I work hard and I’m still in the Top 5 in the division — a former lightweight champion who has already fought for the (interim) title at welterweight.

“I know for the guys like Kevin Lee that wanted to test himself at welterweight, that’s a good fight for me because I’m not the biggest guy at welterweight,” continued Dos Anjos, who has shared the Octagon with a who’s who from the lightweight and welterweight ranks over the last decade. “I have no problems if the UFC sees me that way and I will continue to do my best to keep winning and maybe fight for the title one day. For me, fighting with the guys coming from lightweight is good because I’ve been in this division a little longer.”

That includes serving as Chiesa’s toughest test since relocating to the 170-pound ranks 13 months ago.

After missing weight prior to his UFC 226 loss to Anthony Pettis, the former Ultimate Fighter winner expressed his plans to move up in weight. Five months later, he stepped into the cage with former interim champ Carlos Condit at UFC 232, ending his year on a high note by submitting “The Natural Born Killer” less than a minute into the second round.

For his sophomore appearance in the 170-pound ranks, Chiesa took aim at “The Original Ultimate Fighter,” Diego Sanchez, and turned in another impressive performance, thoroughly out-grappling the indomitable veteran and halting his two-fight winning streak in the process.

Now, just three fights into his welterweight journey, he’s poised to face the division’s resident “truth machine,” who remains ever-confident, but fully committed to controlling the things he can control and allowing everything else to sort itself out.

“He’s a jiu-jitsu guy, but I’m a Brazilian jiu-jitsu black belt and I’ve been doing this for so long,” he said of Chiesa. “I’ll be ready to defend his takedowns and if he wants to go to the ground, I’ll be more than ready. A fight is a fight — anything can happen — but I’m pretty confident in my game.

“I’m always trying to keep the same mindset because sometimes you throw some shots and you feel like you got really close to catching the guy, to landing a good shot, but you miss by a couple inches,” he added. “That’s life - sometimes wins come, sometimes not.

“My life is not easy and I’m okay with it; I’m used to it. I know it’s not going to be easy, but I think my will, my work ethic is there. I will keep pushing, keep trying and I know something good will come up in 2020.”