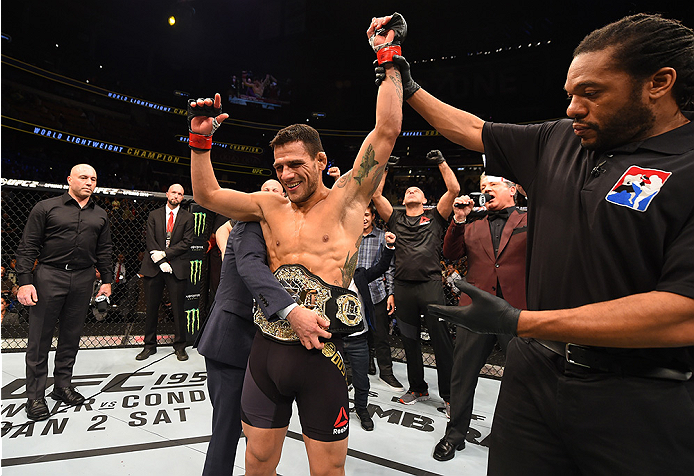 More than two years ago, it took Rafael dos Anjos 15 minutes to defeat Donald “Cowboy” Cerrone. Saturday night at Amway Center in Orlando, the UFC lightweight champion needed just over one minute to stop Cerrone in their rematch and retain his title for the first time.

The pace was frantic from the start, obviously favoring the champion against the notoriously slow starting challenger. And when Rio de Janeiro’s dos Anjos landed a flush kick to the midsection, Cerrone was suddenly in a world of trouble. As Cerrone’s hands dropped, dos Anjos moved his attack upstairs with his punches, and as the Colorado native staggered back to the fence, the champion refused to let him off the hook, with a barrage of shots following. With just under a minute gone, Cerrone looked to clear his head by getting a takedown, but dos Anjos sprawled out of trouble and continued his assault as the bout went to the mat. Finally, with Cerrone taking another series of unanswered shots, referee Herb Dean had seen enough. The official time of the stoppage was 1:06, making it the fastest finish in UFC lightweight title fight history.

And not surprisingly, dos Anjos had a message for the new king of the featherweights, Conor McGregor.

“Hey Mr. McGregor, if you want to come to the lightweight division, this is my division. It’s better to stay in the featherweight division. I would fight you in Brazil, I will go to Ireland to face you there, whatever you want – I’m here to stay.”

“Donald Cerrone is a great opponent,” dos Anjos said. “He won eight fights straight and it’s not easy to do this in the lightweight division, but I have the best team.”