The second UFC fight at welterweight for former 155-pound world champion Rafael Dos Anjos was even more impressive than the first, as he submitted fellow contender Neil Magny in less than four minutes in the UFC 215 co-main event at Rogers Place in Edmonton.

“I’m coming for that belt,” said Dos Anjos, who debuted in the division in June with a decision victory over Tarec Saffiedine.

Dos Anjos eliminated Magny’s sizeable height advantage in a hurry as he put the Coloradan on the deck and began working his ground game. Completely in control, Dos Anjos never gave Magny a chance to breathe, and soon, he locked in an arm triangle choke that forced Magny to tap out at 3:43 of the first round.

“The Messenger” sent a message Saturday night, as Henry Cejudo capped off a career-best effort with a second round stoppage of Wilson Reis in a clash of top five flyweight contenders.

Coming out in a wide stance, Cejudo’s strikes were fast, sharp and on target from the start, and Reis was having trouble dealing with his standup attack, even though he was fighting back and getting some shots of his own thing. Midway through the round, a knee opened up a takedown for Cejudo, but Reis was able to get upright quickly. That was no issue for Cejudo, who kept having success with his striking, jarring Reis momentarily with a kick and then scoring a flash knockdown moments later before finishing off the round with a takedown.

Cejudo kept it coming in round two, and a fast and flush right hand put Reis on the deck. A follow-up barrage of strikes ended matters, with referee Jerin Valel calling a stop to the fight 25 seconds into round two. 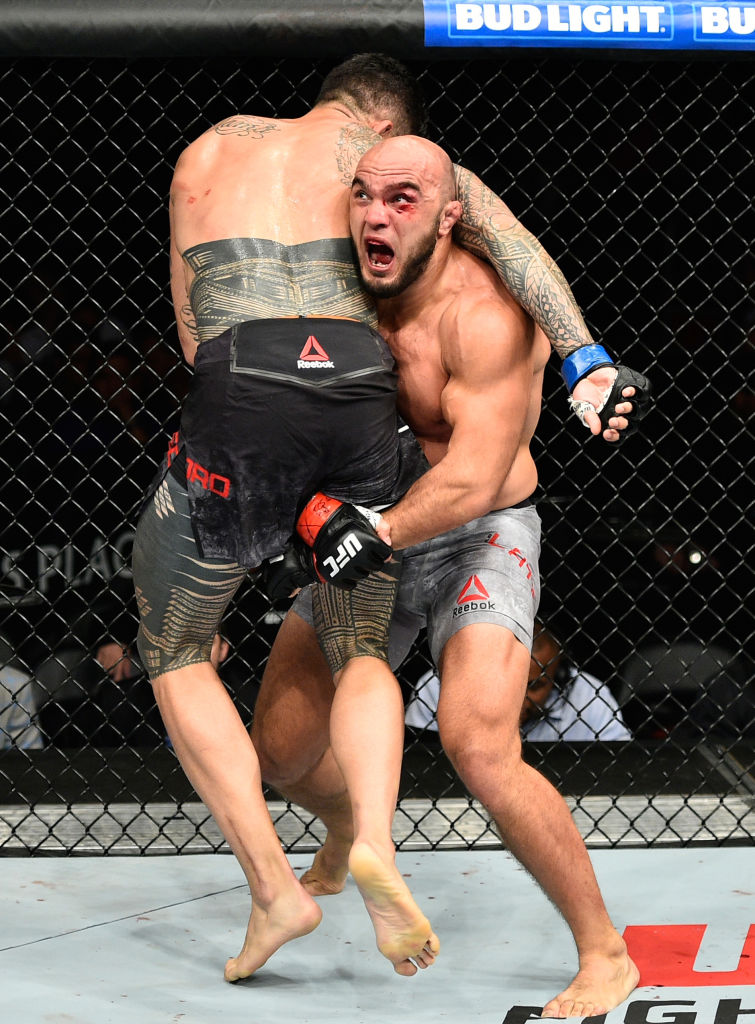 Ilir Latifi of Sweden takes down Tyson Pedro of Australia in their light heavyweight bout during the UFC 215 event inside the Rogers Place on September 9, 2017 in Edmonton, Alberta, Canada. (Photo by Jeff Bottari/Zuffa LLC)" align="left" />Returning Ilir Latifi put in a workmanlike effort for 15 minutes against Australia’s Tyson Pedro in their clash of light heavyweight contenders, winning a hard-fought unanimous decision in his first fight since September 2016.

Latifi got a takedown in the second minute, showing off his world-class wrestling attack. Pedro was able to scramble his way back to his feet and the two traded hard shots, the Aussie getting the better of the exchange. Pedro almost landed a head kick that would have surely ended the fight, but Latifi ducked under and got another takedown, Again, Latifi tried to work from the north-south position, but Pedro exploded back to his feet once more. Latifi kept the pressure on, though, pushing Pedro past the 4:10 mark for the first time in his career.

After battling back and forth early in round two, Latifi scored a takedown with a little over two minutes left, and the Malmo product scored with some hard punches while Pedro was pinned against the fence. Pedro made it back to his feet with Latifi still locked on to him, and even though he got some elbows in, it was a solid round for “The Sledgehammer.”

Pedro’s strikes began finding their mark more in the final round, and the cut around Latifi’s left eye was getting worse. Latifi’s counters were landing well in response, and midway through the frame, the Sweden native got a key takedown, and soon his ground strikes had marked Pedro’s face up, capping off a solid victory for the No. 10-ranked Latifi, who improves to 14-5 with 1 NC. The No. 13-ranked Pedro falls to 6-1.

Looking comfortable in his return to the featherweight class, Melendez employed a stick and move strategy early on, but Stephens was able to slow him down with thudding kicks to the leg that raised a nasty knot on his leg and forced him to the canvas. Melendez rose immediately though, and he went on the attack in a quest to get back at the Iowan. Yet another kick to the leg with under 30 seconds put Melendez down, and while he was able to make it out of the round, he was in serious trouble.

Before the start of the second frame, referee Jerin Velel asked the Octagonside physician to check Melendez’ leg out, and after being given the green light, “El Nino” did his best to draw Stephens into a brawl in round two. That was just fine with “Lil’ Heathen,” who began letting his bombs go as Melendez stalked. Midway through the round, Stephens attacked the left leg again, dropping Melendez, but the former Strikeforce champ got back to his feet once more. The confidence of Stephens was evident, though, and another knockdown late in the frame secured another round for him.

Refusing to give in, Melendez kept fighting and trying to win in the third round, but Stephens’ attacks didn’t let up, with three more knockdowns scored thanks to his leg kicks. And while Stephens got one of his most impressive wins by scores of 30-26 twice and 30-25, Melendez’ heart was undeniable and worthy of praise as well.