Don't tell Anthony Smith that he's made it 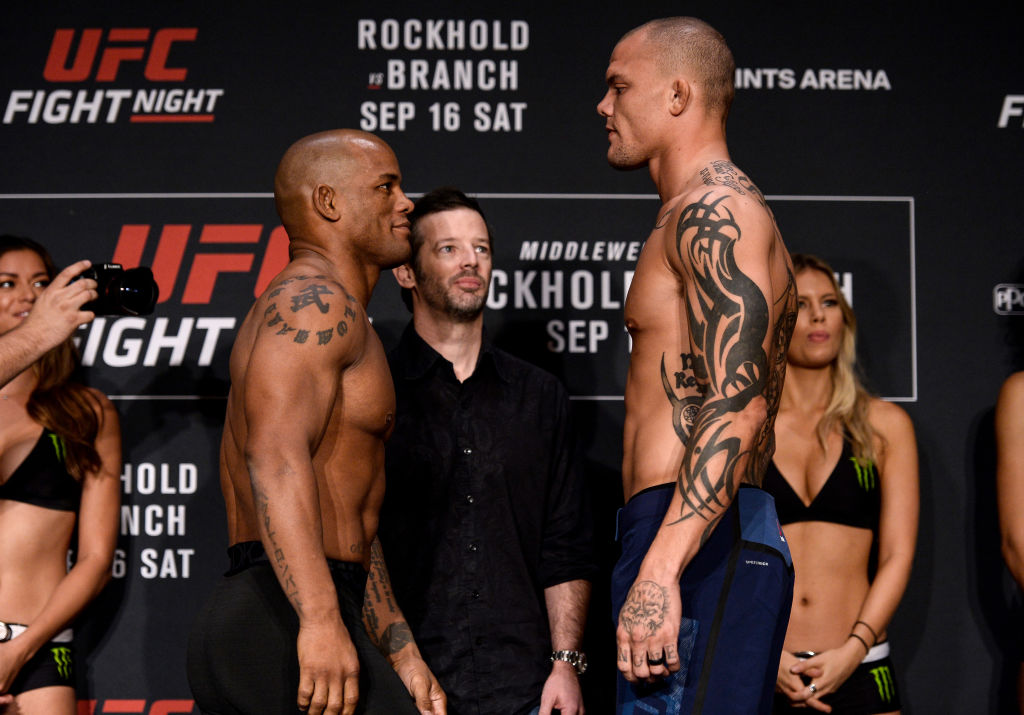 Hector Lombard of Cuba and Anthony Smith face off during the UFC Fight Night Weigh-in on September 15, 2017 in Pittsburgh, PA. (Photo by Brandon Magnus/Zuffa LLC)" align="center" />It was February 5, 2010. Anthony Smith was stopped at 4:35 of the third round by Jake Hecht in a bout at the Mid America Event Center, in Council Bluffs, Iowa. Hecht was a good fighter who would go on to a three-bout run in the UFC.

Smith left the venue that night with a 5-6 record and the assumption that the only way he was getting into a UFC event was with a ticket. The 21-year-old wasn’t deterred from his path, though, never questioning that one day he would make it to the big show.

“I never did, and that’s what crazy,” he said. “I never questioned it because I always knew that I was good enough. There was never a factor of was I good enough or be able to do it. I just needed to hold it together long enough to figure it out. And that’s how I always thought about it. I always knew, deep in my heart, how good I was, and I wasn’t able to figure out why I wasn’t able to put it together, but I also knew that I’ve always been a late bloomer.” 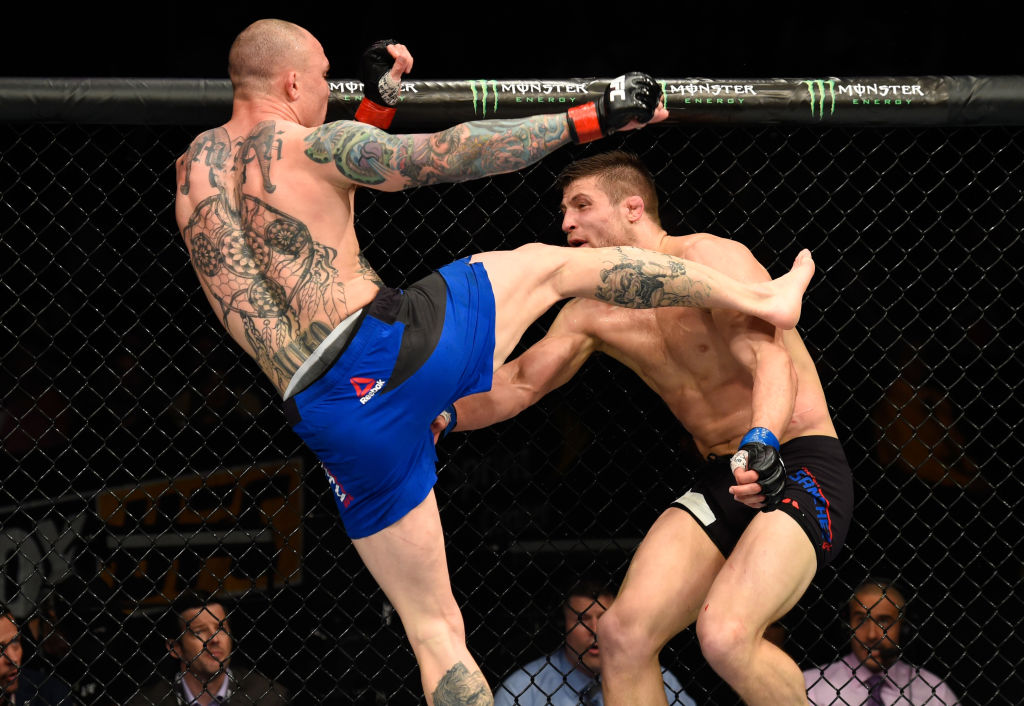 Andrew Sanchez in their middleweight fight during the UFC Fight Night event at Sprint Center on April 15, 2017 in Kansas City, Missouri. (Photo by Josh Hedges/Zuffa LLC)" align="right" />The Nebraskan wasn’t a stellar high school wrestler, only starting to show his potential at the end of his career, and once he decided MMA was his path, the teenage Smith jumped right into the deep end of the pool. He never looked back, but today he admits that it may have been too much too soon.

“If I have any regrets, it’s that I started fighting too early,” he said. “I didn’t let myself mature as a person and a man. I’ve literally grown up in the cage. My first fight, I was 17. I turned pro when I was 19, and I wasn’t even very good, but I had beaten everybody else around here.”

But as the competition got better, Smith found himself a step behind. Not in talent, but in performance when the lights were on.

“I’ve always been a little bit behind everyone else as far as performing,” he said. “I’ve always had skills, but turning it into success in the competition stages is where I’ve always struggled. But to my credit, once I got it figured out, it was figured out, and I think I’m starting to hit my stride now.”

On Saturday, Smith is in a main card UFC Fight Night bout against longtime middleweight contender Hector Lombard. He’s on a two-fight winning streak and if he beats the former Cuban Olympian, that may push him into the top 15 at 185 pounds. But in 2010, there were few people believing that he would one day be battling on even terms with the best middleweights in the world.

He wasn’t alone, though.

“There were a lot of people who were like, ‘Hey man, you’re a nice guy. Maybe you’re just not a fighter. Maybe you just don’t have it in you,’” Smith said. “People just didn’t understand. But the one person who always had my back was my mom. I grew up in a small Nebraska town as one of the only mixed kids in the town. I’m half-black and that was tough enough as it is in Nebraska back then, but my mom always had my back. She said if this is what you want to do, then I’ll do anything I can to help you.

“And as I got older, I met my fiancée - we’ve been together almost eight years now - and she was right in the middle of that stuff,” Smith continues.

When Smith met Mikhala, he was about to fight UFC vet Jesse Forbes in late 2010. He lost that bout, putting him now at 8-7 as a pro. But then everything began to turn around. Smith won nine of his next 10 bouts, putting him on the world radar as a member of the Strikeforce roster. But a loss in his final Strikeforce bout against Roger Gracie started a three-fight spiral that saw him only get a cup of coffee in the UFC, where he lost to Antonio Braga Neto in 2013.

“I ended up getting into the UFC, I went on the three-fight losing streak and we had a baby then,” said Smith, a father of three girls. “And a lot of people probably would have said that it’s time we figure out a real job and figure out what you’re gonna do with your life, but she never did. She’s always supported me. She’s never ever been like, ‘Maybe you should do something else.’ She never doubted me, ever, which is an amazing quality.

Eventually, Smith began to take the potential he showed in the gym into his fights. After his losing streak, he won seven straight, earning a return call to the UFC. He’s now won three of his last four, with two consecutive knockouts and a Performance of the Night bonus to his name. He’s made it, but don’t tell him that.

“I didn’t make it to where I have in my career being happy with what I’ve done so far,” he said. “I try really hard to focus on the task right in front of me, and after each fight I do a little bit of reflecting. I don’t know why it is that I’ve had such a tough road. Things have never clicked the way that they were supposed to, but I do have a little pride in knowing that I made it where I’ve made it and things haven’t even clicked all the way up to this point. I just gotta get a fight where it all comes together at the same time.”

Maybe that fight is this Saturday. If it is, maybe the 29-year-old perfectionist will be satisfied, at least for the rest of the weekend.