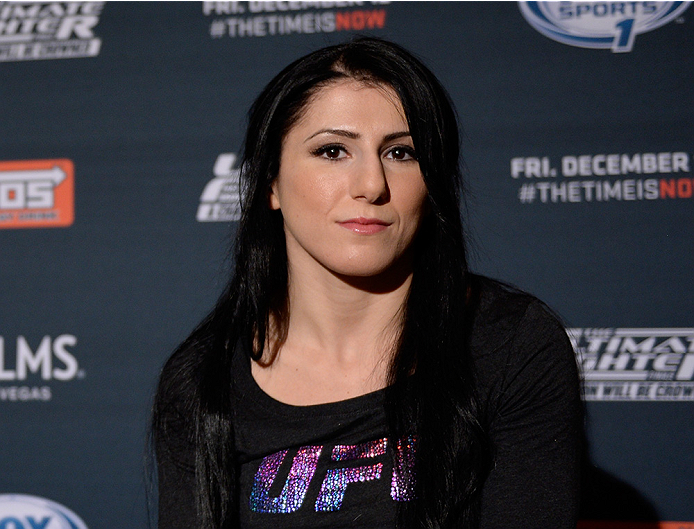 Dedication is a word tossed around pretty frequently in the fight business, with vastly different definitions of it from fighter to fighter. But if we’re going to set a benchmark, start with UFC strawweight Randa Markos.

On a typical day preparing for her fight tonight against Jessica Penne, the 29-year-old traveled across the Canadian border into the United States to train with Michigan Top Team in Dearborn in the morning, drove back over to put in a 12 to 8 shift as a Pharmacy Assistant, and then hit jiu-jitsu practice until 11pm.

“It's totally worth it,” she said. “But I literally have no life right now. I'm looking forward to having somewhat of a life after this fight.”

After this fight, life could change considerably for the native of Baghdad, though in so many ways it already has. Aptly nicknamed “Quiet Storm,” Markos was relatively unknown when she entered the world’s living room as a member of the Ultimate Fighter season 20 cast.

That status didn’t last long, as Markos defeated one of the favorites to win the series, Tecia Torres, on the first episode, then submitted Felice Herrig in the quarterfinals. She would lose in the semifinals to Rose Namajunas, but the point had been made – Randa Markos had arrived.

“I think I'm getting a lot more respect in the fighting world,” she said. “Going into the show, nobody knew who I was, and nobody even took a second look at me. Even all the girls in the house didn't think I had anything to offer, and after that first fight with Tecia, I think it turned a lot of heads and people started respecting me and my work ethic more. I'm a really dedicated person and I'm happy to be where I am and happy to be given the opportunity and I'm not going to let anything go by me. I'm going to train my hardest and I think people see that, and it feels good to finally get that recognition that I've been working so hard for. But I'm still the same person and I'm still going to continue with the same ways that have gotten me this far.”

Hence her insistence on keeping a day job while she gets ready for her UFC debut. She doesn’t even rule out staying in the pharmacy business as she travels up the 115-pound ladder.

“I'd like to not have to rely on fighting to pay my bills, so I'm going to try and keep this job for as long as I can, maybe go part-time after this fight,” she said.

Markos admits that’s it’s not easy juggling all of this, but work has never scared her, and doing things differently from her peers has been part of her life since she was in school and broke from the norm to join the wrestling team. It continued when she did her part to break the pattern of abuse in her own home, and her high-profile on TUF may not just contribute to her own positive future, but also inspire those who can look to her as a role model.

“There are a lot of women messaging me, telling me that I've inspired them, and I love that,” Markos said. “Starting from when I was a little girl and watching my mother get treated badly and my sister get treated badly, there was something inside me that said I'm not going to put up with this. This is not going to be my life, and I'm not going to let my mom be treated like this anymore, and I hope other people realize that you can't let somebody treat you that way. We're better than that and we can be whoever we want as long as we believe in ourselves. I hope people get inspired by that because I know there are a lot of women who were in my mother's situation or my situation and they keep their mouth shut and take all the physical and verbal abuse and go on with their life and think that's the way to be. It's not the way to be, and I hope people realize that. If I can do it, anybody can do it.”

Needless to say, despite her quiet demeanor, Markos will respond if you push her into a corner, and she most certainly did that on TUF and during post-show media obligations, most notably some fierce exchanges with Carla Esparza on FOX Sports 1.

“I was really upset that they put me in that situation to get that side out of me,” she said. “I'm always quiet, but at the same time I couldn't sit there and hear people tell me how I am and how I acted. You put somebody in a corner and you better expect somebody to blow up if you keep pushing them. I'm quiet, but I'm going to stand up for myself; I'm not gonna be treated that way.”

“I left the house realizing how far I've come,” she said. “I always thought all these girls are in Invicta, they're so much better than me, I hope one day I'm gonna be there at that level, and I kept pushing myself harder and harder because I'm thinking my opponents are training harder than me. But going into that house, I realized that some of these girls are really lazy. (Laughs) Some of them are not as hard-working and they rely on different things. So I came out of there with a lot more confidence in myself.”

Some would even say a championship is in her future, but before she can think about that, it’s a debut against fellow semifinalist Jessica Penne in one of the most interesting fights on tonight’s card. “Quiet Storm” Markos is ready for it, though she isn’t ready to promise any spinning backfists or kicks after a camp with Michigan Top Team’s Daron Cruickshank.

“I'm really excited,” she said. “I've been working really hard, hopefully I come out there like a different fighter, and I'm willing to put it all on the line for this fight. It's everything I've worked hard for, everything I've wanted, and it's right there in front of me.”