Don't Ever Count Mark Hunt Out 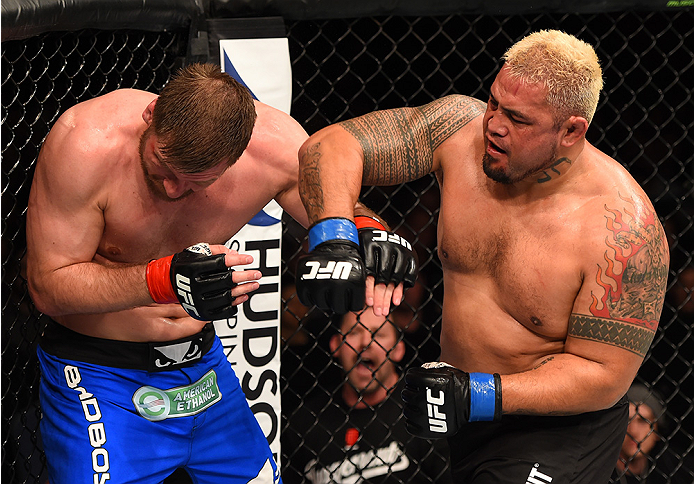 Cutting a lot of weight isn’t fun. And it sucks the fight out of you.

Mark Hunt learned that lesson the hard way in his last fight, a fifth-round TKO loss to Stipe Miocic in May. Hunt began his fight camp far too heavy, and after a tough weight cut, he barely made the heavyweight limit, weighing in at 266 pounds.

Hunt hasn’t made the same mistake for his fight this Saturday (Sunday Australian time) against Antonio “Bigfoot” Silva on the main card of UFC 193: Rousey vs Holm, a rematch of one of the most exciting fights in UFC history.

“I made an error in my weight cut and I paid for it. That’s basically what happened. It cost me all the camp that I did. It pissed me off. But it was a good performance on Miocic’s part”.

The “Super Samoan” says his weight is firmly under control this time, with a full training camp at the American Kickboxing Academy’s Thailand facility behind him ahead of his fight at Melbourne, Australia’s Etihad Stadium.

“The training camp is pretty awesome; I’ve been getting some good work in with the guys there like Mike (Swick). So it’s pretty good, I’ve been working hard.”

Being a sparring partner to power puncher Mark Hunt sounds like the worst job in the world. But Hunt says his training partners, a group that includes Hunt’s friend and recently retired UFC heavyweight Soa Palelei, are up to the task. Still, Hunt laughs when asked if people hate sparring with him.

“Not really. They’re all really good guys I’m working with, and we all look after each other so we don’t get too banged up. We make sure everyone’s not going too hard while training. The idea is to make it to the Octagon injury free, not to not make it at all”.

Hunt says the lopsided loss to Miocic hasn’t shaken his confidence heading into the eagerly anticipated rematch against Silva, whose last fight was a second-round TKO victory over the aforementioned Palelei.

“No, I don’t (lose confidence after a loss). It gets you down for a couple of days. I’ve always felt that I’m the best fighter on the planet, it’s just the way it is,” Hunt said.  “Even though I got beat up in that last match, it’s just one of those things. I think it’s ingrained in me, I don’t know why.  Probably when I stop fighting I won’t feel the same.”

The 41-year-old Hunt is well known for his iron chin. But the “Super Samoan” isn’t just durable physically: Hunt has an impressive ability to believe in himself when nobody else will.
RELATED CONTENT:  Mark Hunt free fight | Watch: Hunt vs. Werdum for heavyweight title | Hunt vs. Bigfoot matchup

A former K-1 World Grand Prix Champion, Hunt thinks that may be because he grew up without support from the two people supposed to provide it unconditionally - his parents. In his autobiography “Born to Fight,” Hunt has opened up about the details of his hellish childhood in South Auckland, in which he endured horrific physical beatings and psychological abuse from his father, with a mother who would laugh while it happened.

Releasing an autobiography didn’t come naturally to Hunt, who is known for his aversion to talking about himself. But the book was about helping other people.

“I only wrote the book to help others that have had a similar situation; I didn’t write the book for any reason but that. I’m a pretty private person and I don’t really talk much about that stuff, but the publisher said it would help others and that’s why I did it.”

Mark Hunt credits his start in life with teaching him resilience.

Maybe it’s that resilience that allowed Hunt to stage one of the most remarkable career comebacks in UFC history.  He reversed a six-fight losing streak that extended over four years, scoring KO victories over some of the best heavyweights in the UFC and earning a title shot in 2014. So while he’s now coming off a tough loss, it’s foolish to count Mark Hunt out.

In the first fight between the “Super Samoan” and “Bigfoot,” the back and forth striking exchanges made the fight so exciting to watch. At different points in the bout, both men were on the brink of being finished, but somehow fought on.

But Hunt isn’t promising the same this time around.

“I think it’s gonna be a knockout, it’s gonna go one or two rounds maybe, we’ll see what happens.”