Don't Count Marquardt Out Yet

"I know how good I am, and I know that I can beat and should beat anyone
in the world if you match us up on paper as far as skills, athletic
ability, and experience." - Nate Marquardt 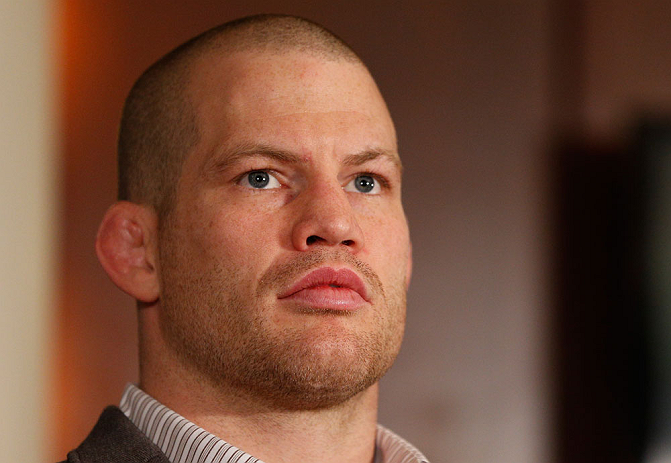 It was a streak to be admired, one nearly 14 years long. But when Nate Marquardt was knocked out in the first round by Jake Ellenberger in March, for the first time in his career, he had lost two consecutive fights.

When that happens early in your career, it’s easier to brush off. When it comes nearly 50 fights in and when you’re about to turn 34, you have to wonder if you’re starting to reach the end of the road as a pro fighter. But after some early doubts, Marquardt looks at his short notice loss to Ellenberger and a decision defeat to Tarec Saffiedine two months earlier not as signs of a decline, but a wakeup call.

“All those negative thoughts and questioning thoughts are going to creep in,” he admits. “For me, it was a situation where I definitely shouldn’t have taken that fight on short notice, but that’s not why I lost. The reason I lost was I feel like God wanted to show me, ‘hey I’ve given you everything you have, and you’re not gonna do this on your own.’”

Always a faith-driven man, Marquardt actually got baptized again in August, symbolizing a change in approach to life and the fight game, as he believes that while he always said and did the right thing, he started to drift a bit.

“I’ve tried to live my life in a way that God wanted me to, but over the years I grew away from God in my heart,” he said. “I was still doing the same things, always trying to put my family first and still going to church and praying, but in my heart, my career started to grow as a false idol. I was always trying to gain that accomplishment of the title, and that started to become more important than God. I wish that realization would have come sooner, but I still have time to do God’s work in this sport, and it’s obviously still one of my goals to be the champion, and I definitely think it’s a very good possibility that that will happen.”

Whatever your religious beliefs may be, or if you don’t have any at all, we all can agree that often a fighter at peace is a fighter at his most dangerous. And it’s clear that Marquardt is at peace before his UFC 166 bout with Hector Lombard on Saturday.

Participants in one of the most intriguing bouts on a stacked card (so stacked that this fight didn’t even make the main card), both Marquardt and Lombard (who is making his welterweight debut) are in need of a win to keep any sort of title hopes alive. For Marquardt, just 3-4 in his last seven, the stakes may even higher, as his job could be riding on the result of this weekend’s matchup.

But if you’re looking for negative thoughts to enter his mind before the fight, they’re not there. He can owe that to his recommitment to his faith, but also to his training situation. Mainly centered in his native Colorado with his new Elevation Fight Team, Marquardt has also taken the six hour drive to Albuquerque to work with his old Jackson’s MMA comrades. But Denver is truly home for the former Strikeforce champion, where he doesn’t just get ready for his own fight, but helps his teammates get ready for theirs.

“Right now, it’s the easiest to do it that way because I can show them that I’m getting world-class training and I’m not always putting myself first,” he said. “One of things about this sport is that it tends to make you very selfish and that’s what we’re taught. It’s not even necessarily something that’s natural – it’s taught to you. ‘Okay, you need to do this for yourself and that for yourself, and you need your rest, and your food,’ so it’s always about me, me, me. So a big thing about starting the new team was having a selfless value system where it’s more about not just yourself, but about helping your team out, and the more you help your team out, in turn it’s gonna come back and help you. I feel like I’m getting the best training I can, and at the same time every day I’m in there I’m trying to help somebody improve and trying to help guys learn different aspects of the game. That’s the best way to show people, by example.”

And the best way to breed a winning culture in the gym is by winning, an example Marquardt hopes to begin with a victory over Lombard that will not only snap his two-fight losing skid, but get him back on the road he believes he belongs on.

“I’m so strong and fast right now, and obviously the more experience you have the better you get technically, and as a fighter in the training room, I know how good I am, and I know that I can beat and should beat anyone in the world if you match us up on paper as far as skills, athletic ability, and experience,” he said. “But then I can lose to somebody who on paper I shouldn’t lose to, and then I lose two in a row like that, and to me, that’s just God saying ‘you can try as hard as you want, but if your heart’s not in the right spot, I’m not gonna let you have that.’”

Nate Marquardt’s heart is back in the right spot.