Dong Hyun Ma Promises To Be Memorable For Home Fans

“I will be the most memorable fighter of the night,” he promises convincingly.
By Steve Latrell, on Twitter: @TheUFSteve • Dec. 19, 2019

It’s not uncommon to hear UFC fighters speaking excitedly about food, particularly in the depths of fight week weight-cutting. But for Dong Hyun Ma, there’s more to it than that.

“This is my very first time fighting in my actual home city,” he explains via translator. “I am excited. My heart is fluttering more than any other time. It’s the best! No flight, no time zone change, the food difference, the best fight preparation of my life… but I also feel a heavy responsibility as well.” 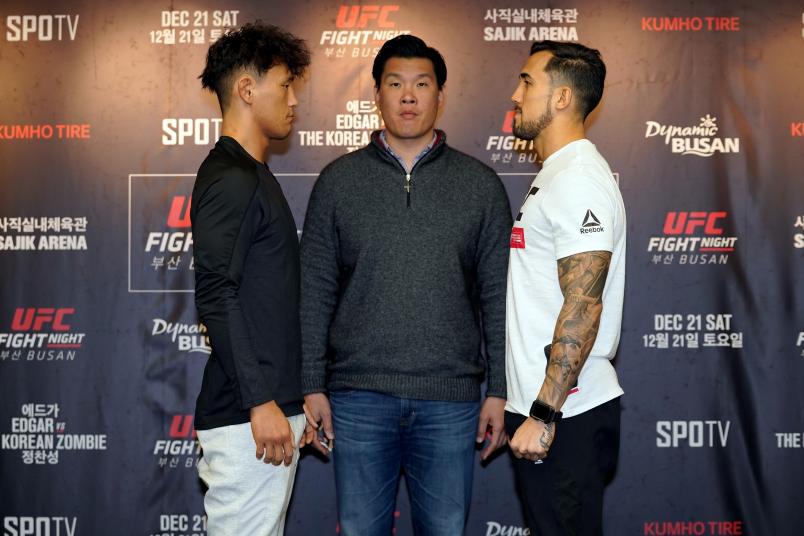 More from UFC Busan: Fight by Fight Preview | Jourdain Eager For Vengeance | Fighters On The Rise

It’s a tale almost as familiar as the sport itself: the conquering hero returns to the place where it all began. He’s eased by the comforts of home, but carrying the pressure of making his people proud.

“I will be the most memorable fighter of the night,” he promises convincingly.

Ma might have been the most memorable fighter of the night during his last bout, albeit not for the reasons he’d hoped. Trading nasty blows with Scott Holtzman in New Jersey last August, the doctors were forced to call the fight when Ma’s eye ballooned up in a ball that was as frightening as it was unforgettable. More than four months later, people still can’t stop asking him about it.

“Amazingly, it was not that serious an injury,” he explains. “There was no fracture or damage to my eyesight. The bruise disappeared in 10 days and I could get back to training.”

Back to training? If you witnessed it, you already know it challenges even the most active of imaginations to think of anyone sparring a week and a half after rivaling Donald Cerrone for the gnarliest swollen eye of the year. But a few minutes in the presence of the “Maestro” and it quickly becomes evident that the 31-year-old is in a class of his own. The loss to Holtzman put him on a two-fight losing streak, although you’d never guess it by speaking to him.

“I don’t blame myself until the end. It eats and demolishes one’s soul,” he says plainly. “I just finished a hard training session for my opponent and you will see my performance and confidence in the Octagon.”

That performance he speaks of will come against hot prospect Omar Morales, one of the most feared recent graduates of Dana White’s Contender Series.

Undefeated striker with powerful skills,” he says of the 8-0 Venezuelan. “Also, he must be very motivated because it is his UFC debut. But I have performed amazing and aggressive fights against strikers, and I am sure all the crowd in the arena will be super pumped up after watching our fight.”

That sounds like bragging, and perhaps it is, but the thing is: he’s probably right.

Win or lose, Ma is not a point-fighter looking for low-risk victories. His willingness to eat one in order to deliver two has always made him one of the most reliably entertaining fighters in the lightweight division, and with the pride of fighting at home oozing from every pore, the bout is destined to reward everyone who has made it to their seats for the prelims. He understands the people want a show, and he intends to keep giving it.

“I always look fights. If my physical condition allows, I plan to have five fights in 2020.”

Five fights? Here goes Ma again, challenging our imaginations. But if he’s right, nobody will be complaining.