"Fame is a temporary thing. I try not to be cocky. I try to be humble and concentrate on being a martial artist." - Dong Hyun Kim 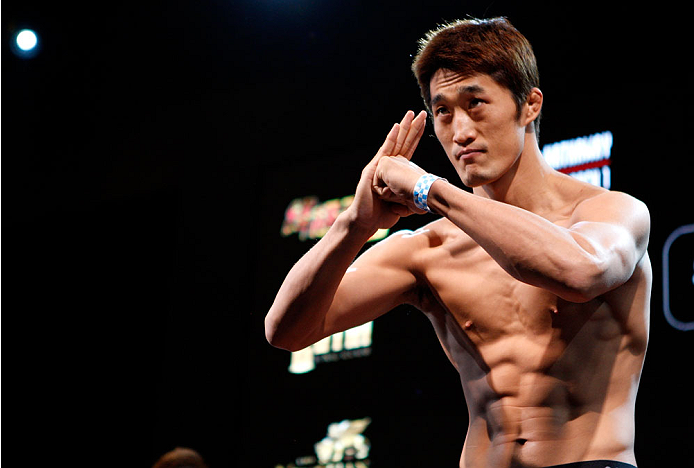 It has to be satisfying to be Dong Hyun Kim these days. A year ago, he was one of “those guys,” a top-level fighter in the welterweight division with eight UFC wins to his name, but who was also saddled with a reputation as someone who wasn’t exactly going to set a record for post-fight bonuses.

He knew it too, saying earlier this year, “In the early days of my career in the UFC, I was the only Korean fighter. My primary goal was to survive. I had to survive as the only Korean fighter and I felt like I was responsible for the booming of the UFC in Korea. But now, there are many Korean fighters in the UFC and they are performing well. I will fight like Dong Hyun Kim now. I am not young anymore. I am at the most important time of my career. I could choose to be either one of those seasoned fighters who win some and lose some or gamble and fight aggressively to gain the title shot. I'd rather venture to be aggressive. There is no opportunity for boring fighters.”

A great explanation that makes a lot of sense, but a lot of fighters promise to be aggressive and exciting but fail to pull the trigger on fight night. But the 32-year-old Kim lived up to his words, first picking up Knockout of the Night honors for his second round finish of Erick Silva last October, and then adding a Performance of the Night check to his bank account with a brilliant spinning back elbow knockout of John Hathaway in March. All of a sudden, everybody wanted to see Dong Hyun Kim, and he couldn’t be happier.

“It means a lot,” Kim said through manager / translator Alan Cho. “That's what the UFC needs (fighters who are supported by the fans). I want to be the UFC’s most wanted fighter.”

If he keeps this up and picks up a fifth consecutive victory against Tyron Woodley in the UFC Fight Night co-main event in Macao this Saturday, that might be inevitable, and that’s a good thing for Kim and the fans, because both will be finally getting what they wanted to see.

These days, South Korea is producing a lot of quality fighters, including Chan Sung Jung and Hyun Gyu Lim, and the pressure is off Kim to an extent, a development he’s pleased with.

“There are many Korean fighters now, so I don’t have the same pressure anymore,” he said. “I want to fight for the fans now and show them what they want to see.”

Kim was originally slated to face Hector Lombard in Macao, but the veteran from Cuba withdrew from the bout due to injury. An equally explosive matchup is expected between Kim and Tyron Woodley though. How explosive? Just ask Kim if the change in opponent altered his preparation at all.

“They both have jaws,” Kim said. “So it doesn’t make any difference. Once my fist touches his jaw, it will be the end of the fight.”

Fighting words indeed, but not malicious ones, because when you ask Kim about the difficulties Woodley brings to the Octagon, he’s equally as blunt.

“He has finished many fighters,” Kim said of Woodley. “He may finish me as well, but I may finish him, too.”

At least there’s no mystery when it comes to Kim’s game plan on Saturday night – he’s showing up looking for an early night, and if gets one, he will have thrown his hat into an increasingly crowded ring filled with fighters seeking a shot at champion Johny Hendricks. So Kim knows that decisions aren’t going to do the trick here; he’s got to be spectacular every time out.

“I want to have an impactful fight and win, so I can earn it right away.”

Could you imagine what it will be like if Kim doesn’t just get a title shot, but wins the belt, becoming not just the first South Korean to earn a UFC championship, but the first Asian? He can.

“Everyone in Korea will go crazy,” he said. “And plus, other Korean fighters will be more confident.”

Notice he doesn’t say anything about the personal gains for himself with such an accomplishment. That’s not surprising though.

“Fame is a temporary thing,” Kim said. “I try not to be cocky. I try to be humble and concentrate on being a martial artist.”

He’s doing a fine job, and at last, the world’s on board with Dong Hyun Kim. It’s been an interesting journey thus far, especially for the man with the gloves on.

“Before I came to the UFC, I had a hard time feeding myself,” Kim said. “I was young and I had nothing but a dream. But now, I drive a Range Rover.”