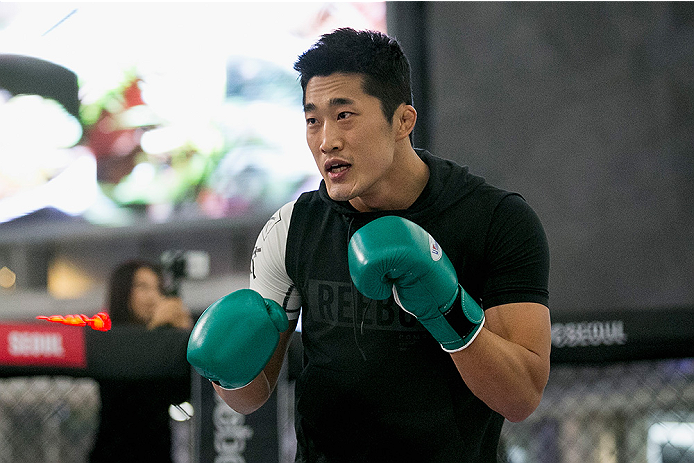 A lot of fighters claim to be fighting for their country when they step into the Octagon. Few really are. Dong Hyun Kim is one of those few.

It’s hard to believe that it was over seven years ago that “The Stun Gun” made his UFC debut against Jason Tan in May of 2008. A native of Suwon, Kim was the first Korean to fight in the UFC since Joe Son, and in the nearly 14 years since Son lost to Keith Hackney in less than three minutes, MMA in the country was almost an afterthought when it came to the international scene.

There were fighters like Kim though, training every day in a sport that was scoffed at by the public, but that he hoped would take him around the world and establish him as one of the best at what he did.

“When MMA first came to Korea, people looked at MMA as street fights and not a sport,” Kim said. “The perception of this sport was that it was violent. I even felt embarrassed to say I am an MMA fighter.”

That didn’t stop him though, and after compiling a 9-0-1 record, he got the call to the UFC. I asked him if it was possible to describe the pressure he was under to succeed, not just for himself, but for his fellow fighters at home.

“Survival,” he said. “If I fail, the UFC will never have an interest in Korea and Korean fighters.”

Kim survived…and thrived. He knocked out Tan in the third round and began piling up wins. The names of Matt Brown, TJ Grant, Amir Sadollah and Nate Diaz were impressive, but Kim wasn’t fighting with the aggressive risk-taking that earned him a roster spot in the first place. But after compiling an 8-2, 1 NC record and feeling that he had done enough to prove that his countrymen were legit MMA fighters, he decided to throw caution to the wind in his 2013 bout in Brazil against Erick Silva.

“The Korean MMA market was in a recession around 2008 to 2012,” Kim explains, referring partially to the lack of good fights on the Japanese scene during that time. “There were so many talented fighters, but no opportunity for them. I wanted to make those opportunities for them. So when I fought Erick Silva, I felt like I was being sacrificed for a Brazilian fighter in front of his fans. Yushin Okami and I had a similar fighting style and he didn't get to renew his contract, and I felt pressured and felt like I was on the edge. I didn't focus on winning against Erick Silva; I just wanted to fight like used to fight. I thought it was going to be my last fight in the UFC and that’s when I knocked Erick out.”

The thrilling stoppage of Silva earned Kim his first Knockout of the Night bonus, and his spinning back fist finish of John Hathaway five months later made it two straight. A loss to Tyron Woodley in August of 2014 slowed his momentum, but he got it back in May with a submission of Josh Burkman. Now ranked seventh in the world at 170 pounds, Kim returns to fight at home on Saturday against Dominic Waters.

The last time Kim fought in South Korea was in 2004, and it was just his second pro fight. More than 11 years later, this bout is more than just a fight.

“I always said it jokingly that it will happen in Korea someday,” he said of the UFC’s first event in his country. “And looking back, I never thought that I'd be able to have 11 wins (in the UFC). When I first signed with the UFC, people in Korea did not even know what UFC was. I also remember thinking that out of a four-fight contract, I'll be satisfied and feel successful if I just get to 2-2.”

He doesn’t think that way anymore. A shot at the welterweight title in the future is in the cards if he keeps winning, and South Korea most certainly knows what MMA is these days.

“MMA gets broadcasted a lot,” he said. “(Yoshihiro) Akiyama also appears in major TV programs, which shows that MMA is becoming more popular.”

Kim and Akiyama even joined forces to portray mobsters in a music video for a popular K-Pop band, and it’s likely that the pair will duel each other for the biggest roar from the crowd on Saturday night. But Kim is still focused on the task at hand and not necessarily the occasion, which could be overwhelming for someone who started out hopeful, but not knowing for sure if this day would ever come.

“The home fans' cheering will strengthen me,” he said. “I am sure Korean fans will give me tremendous amount of energy.”

In response, he will send a message to Albuquerque’s Waters.