For the first decade of her career, fighting was a hobby for the 35-year-old veteran, who lived and worked in Japan, but following her stint on Season 18 of The Ultimate Fighter, she opted to go all-in on her career in the cage, moved to Las Vegas and started trying to close the gap on her contemporaries.

“In the past, the game was different so people were able to just get by with training once a day and I could use my jiu-jitsu skills to win,” explained Modafferi, who has been training at Syndicate MMA with head coach John Wood for the past five years. “But now everyone has become an athlete, so you have to do your strength and conditioning, you have to do your wrestling, your boxing, your whatever.

“I really needed this. I feel like I’m playing catch-up despite having been training for so long. Now I feel like I have the tools in my toolbox to make it in the UFC and have another title run in the future.” 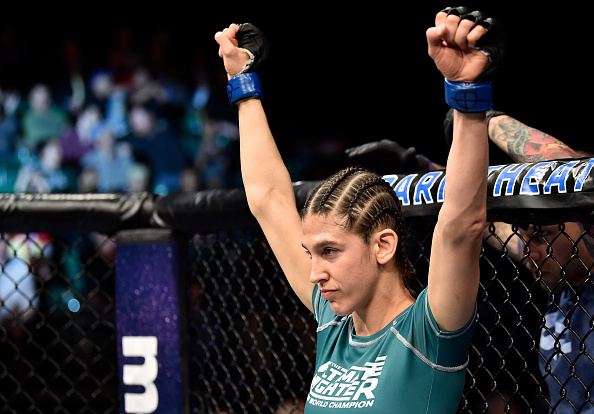 The results were immediate and impressive as Modafferi won six of her next eight fights competing primarily under the Invicta FC banner, collecting victories over Tara LaRosa, Andrea Lee and DeAnna Bennett. And when the UFC announced it was introducing the women’s flyweight division with a tournament to crown the inaugural champion via The Ultimate Fighter, Modafferi was an obvious choice for the cast.

Entering as the top seed in the 16-woman tournament, she advanced to the semifinals before dropping a unanimous decision to Sijara Eubanks, and was slated to face fellow cast member and former Invicta FC flyweight champion Barb Honchak at the finale, but weight-cutting issues forced Eubanks off the card thrust Modafferi into a showdown with Nicco Montano to determine the first UFC women’s flyweight champion.

“The UFC was my goal for my future and I knew I wanted to make a living out of it, so everything is going according to my hopes,” said Modafferi, who came out on the wrong side of a unanimous decision verdict against Montano back in December. “I won a bunch of fights in Invicta – I love that organization – and I got back into the UFC. I’m working hard for my goals and I’m achieving them so far, despite my fight with Nicco not going the way I wanted it to.”

Firmly established as a member of the UFC roster and confident in her abilities in the cage, Modafferi is now hoping to start crossing other items off her personal, professional To Do List, and she has an opportunity to potentially kill as many as three birds with one stone later this week at The Ultimate Fighter 27 Finale.

“Barb Honchak is my No. 1 desired fight; I’m dying to fight her,” said Modafferi. “Seven years ago, we fought and I lost, so this is a rematch that I have always wanted.

“She’s so skilled. In my brain, she’s the Invicta champion. Her past losses don’t matter to me. All I care about is getting in there with her and showing myself and the world and her that I’ve improved and I can win this time. It was actually more pressure preparing for her last time than it was to get the actual title fight, so I’m going back to that because this means so much to me personally.”

Bird No. 2 is finally adding a victory inside the Octagon to her expansive resume.

“It would mean so much for me to get this victory,” admitted the 35-fight veteran who has competed against multiple generations of female talent during the course of her career. “I’ve fought on The Ultimate Fighter and I’ve had victories there, but unfortunately, that doesn’t go on my official pro record, so I’m technically 0-2 in the UFC, which sucks.

“I’m trying not to stress out about it, but I would be lying if I said I’m not stressed out about it, but I really just want to get in there, be in front of everybody, have my hand raised and be like, ‘Yeah, I freaking won in the UFC officially! Put it on my record, baby!’”

Bird No. 3 is collecting a win by knockout because while she’s earned numerous submission finishes and a couple TKO stoppages scattered amongst her 21 career wins, a good, clean knockout has thus far eluded Modafferi and she’d like to change that before her career comes to a close.

“I also want to have a win by knockout on my record at one point,” she added. ”Who knows if it will be her because she’s so tough? I don’t know that I’ll be able to finish it, but I’m always going to try.”

That would be quite the trifecta for the tenured fan favorite, but even if she doesn’t get the knockout, two out of three ain’t bad.