For at least one day, the apples were safe.

“I actually ate ‘em all,” Sage Northcutt laughed a week ago, well aware that the line of questioning had to do with the video clip of him crushing an apple for model Chrissy Teigen last month. The clip went viral, and Northcutt, as his custom, took it all in stride.

“I just did it as something fun,” he said. “I figured I’d make it a challenge, seeing who else can do it, and it just happened to go off like that. It’s super cool.”

But how does he top that? Coconuts, watermelons?

“A coconut?” he laughs. “That would be crazy. Maybe a watermelon. I gotta work my way up to that.”

Now there’s a resolution for 2017. But first, there’s serious work to be done, first as a Texas A&M student and then as a professional prizefighter. Before he steps into the Octagon to face Mickey Gall in Saturday’s UFC on FOX co-main event in Sacramento, Northcutt has to finish up his final exams. Yes, while other fighters are worried about cutting weight, he’s hitting the books.

“I cut back my classes, so I’m getting rid of my elective classes for school at Texas A&M and the finals are coming up, so I’ll be finished with them right before my fight on December 17.”

Right before his fight?

“Yes sir, but that should be no problem. I’ll be ready.” 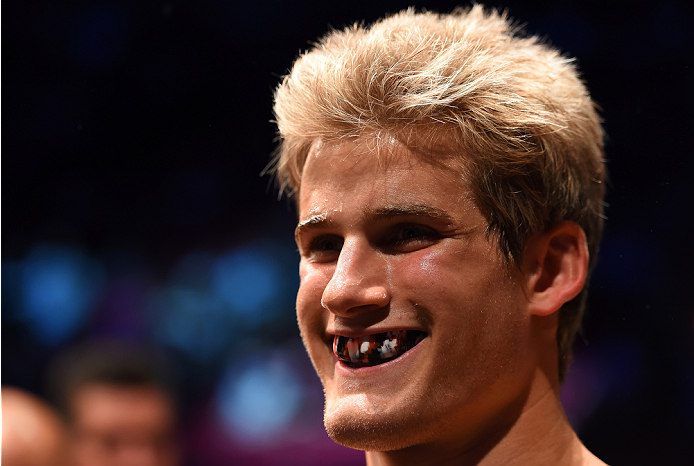 If Hollywood created Northcutt, no one would believe it. Simply put, there is no other athlete out there like the 20-year-old from Katy, Texas. Sure, he has a high upside as a fighter and has the potential to do big things in the sport, but it’s more about how he carries himself. If he came around in the fifties, this wouldn’t be a big deal. But today, a polite young man who is the epitome of the phrase “All-American” is an anomaly in this cynical world. But that’s just who he is.

“I’ve grown up having respect, and the way my parents have raised me and what martial arts has taught me is to be very respectful all the time and to walk around and carry myself as a man,” Northcutt said. “That’s the way I try to do everything, and whether it’s martial arts, school, or walking to the grocery store, no matter what it is, it’s always the same me.”

Of course, in that aforementioned cynical world, people will take shots at someone like Northcutt, and with his rising popularity, there are those who see fighting him as a quick way to the top. That’s fine with him, because the way he sees it, he’s going to have to fight anyway.

“Sometimes people try to get attention, so maybe they’re doing it for that reason, but whatever it might be, we’re in the sport of mixed martial arts, so people want to fight other people and that’s how it is. So I’m not surprised by it.”

What may have surprised some is how smoothly he rebounded from the lone loss of his career to Bryan Barberena in January. Fighting on the UFC 200 card in July, Northcutt held off some early trouble from Enrique Marin to win a close, but unanimous decision. It was the most important win of his four-fight UFC run thus far, but he’s not gloating about it, as there’s more work to be done this weekend.

“Every fight’s important so, for me, winning the fight was very important, and that’s what I’m planning on doing in this fight.” 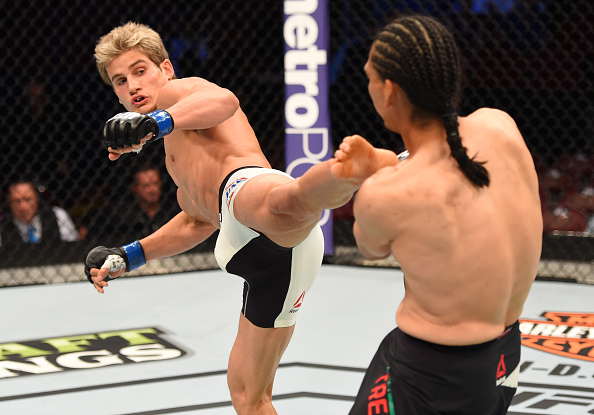 So is that the secret for Northcutt, to never look back?

“You absolutely look back,” he said. “You have to look back at your previous experiences and previous fights that you’ve had to correct things, fix what you’ve done wrong and make yourself better – a better athlete, better at the sport, and have better knowledge.”

And since the win over Marin, Northcutt has gotten another level of fight knowledge thanks to working with UFC welterweight champion Tyron Woodley while “The Chosen One” prepared for his UFC 205 bout with Stephen Thompson. It was an honor for Northcutt to be called in, and the enthusiasm in his voice when talking about his work with the 170-pound king is evident.

“Mr. Woodley is such a nice guy,” Northcutt said. “He’s an awesome guy, he’s got a great heart and he’s incredible. Getting to train with the champ, who gets to do that that often? So it was an incredible experience. You get to be there, learn and get to see how he trains, what drives and motivates him, and it’s such a good time to hang out with him and get to train with him.”

So he called him Mr. Woodley, and not Tyron or Champ?

“I absolutely did,” Northcutt laughs. “That’s how it is. He told me he found it very respectful and he said he doesn’t see that a lot these days, and he found it refreshing. That was very nice of him to say that to me.”

Yeah, Sage Northcutt is not like the other 20-year-olds out there. Not just in sports, but in life. And there’s nothing wrong with that for a fighter with some big plans for 2017.

“2017’s going to be great,” he said. “Great fights, great experiences, maybe getting to do some acting or modeling on the side too. I’m looking forward to great things in the future.”