Donald Cerrone: Wound Up And Raring To Go

Enduring His Longest Stretch Without A Win, Donald "Cowboy" Cerrone Is Primed To Change The Tide At UFC Fight Night: Rodriguez vs Waterson
By E. Spencer Kyte, on Twitter @spencerykyte • May. 7, 2021

Donald Cerrone has worn a lot of hats during the course of his UFC career.

He’s been a contender at lightweight and welterweight; a main event attraction, main card staple, and frequently featured in “The People’s Main Event.” He’s been a veteran litmus test for prospects in two weight classes; a Top 15 fixture; a guy who has struggled a time or two, and a guy that has put together some of his best runs after folks already believed his career was winding down.

He’s been both a trailblazer and an old school throwback at the same time, bringing the idea of staying as active as possible to the forefront as one of the last men to truly adhere to the “anyone, anywhere, anytime” creed.

“It was seven times in 14 months if we’re stating facts,” offered Cerrone in his trademark quiet grumble as we talk about Kevin Holland’s hyper-active 2020 campaign and the attention it received just a few days before he makes the walk to the Octagon for the first time this year. 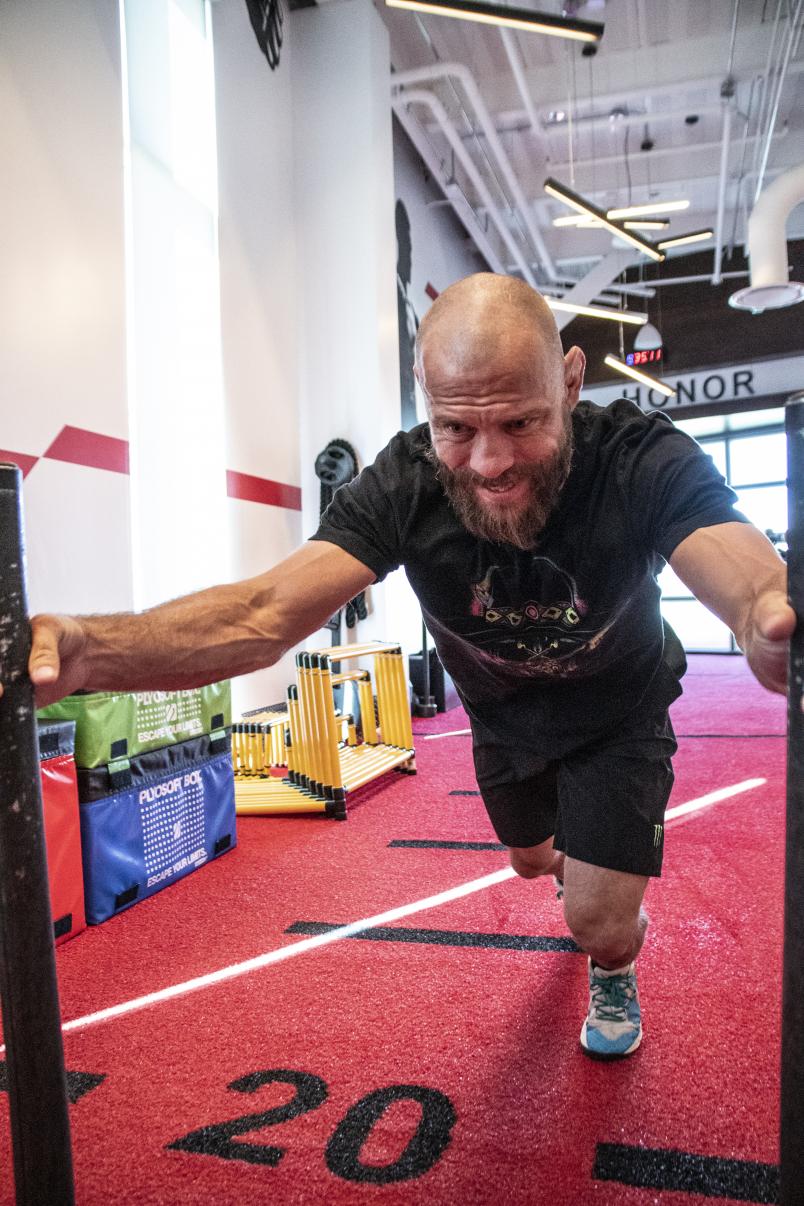 I had said he knew a thing or two about fighting frequently; mentioning he’d logged six appearances in a 12-month period a few times. He looked to clarify things, pointing out that the first seven fights in his career-best eight-fight winning streak occurred in a whirlwind 14 months stretch that started with a victory over Evan Dunham at UFC 167 on November 16, 2013, and was capped by a short-notice triumph over his old WEC rival, Benson Henderson, in Boston, Massachusetts on January 18, 2015.

“I’m glad to see the kid doing it,” he added regarding Holland, who maintained his extraordinary pace by fighting twice already this year, giving him seven appearances in the last 12 months.

When I mentioned that fellow active fighter Neil Magny saw Holland’s five wins in a calendar year as a new record to be broken, the now 38-year-old Cerrone wasn’t as quick to accept the challenge as he would have been in previous years.

“Probably, but I’m getting old now,” he said, his hesitation tinged with a bit of disappointment. “My body can’t stay that active.”

Over the first 10 years of his UFC career, no one has been as active or successful as the proprietor of the BMF Ranch.

Entering Saturday’s contest with Alex Morono, who replaces Diego Sanchez in this weekend’s co-main event pairing, Cerrone has the most victories (23) in UFC history and will again draw level with long-time lightweight Jim Miller for the most appearances inside the Octagon at 37. 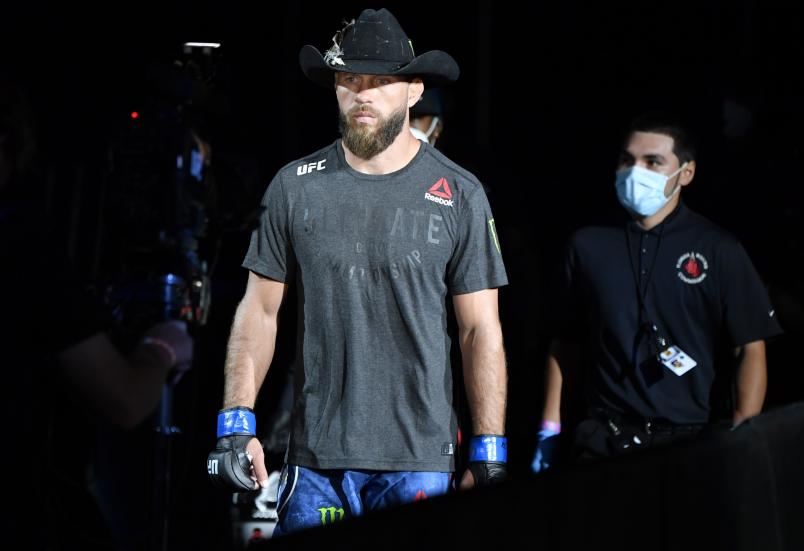 Donald Cerrone prepares to fight Anthony Pettis in their heavyweight fight during the UFC 249 event at VyStar Veterans Memorial Arena on May 09, 2020 in Jacksonville, Florida. (Photo by Jeff Bottari/Zuffa LLC)

He has the most finishes (16) and post-fight bonuses (18) of anyone to compete under the UFC banner, with his three appearances last year being the least he’s fought in a single year since fighting only twice in 2012.

But that doesn’t mean “Cowboy” has any plans on walking away just yet.

Despite being older than most of the active welterweights on the UFC roster and heading into this weekend’s event on the longest run without a victory of his career, Cerrone feels rejuvenated by the birth of his second child, a son named Riot River, in September, and the financial responsibilities that come with being the head of the household.

“Now I’ve got to save twice as much money, so now I’ve really got to get paid,” laughed Cerrone, who acknowledged that after years of purchasing big boy toys and spending money before he’d earned it, he had done a good job of squirreling some away until making his last major investment.

“I have, yes,” he began when asked about reining in his spending. “Well, I did, but the wife wants to build a new house, so now it’s gone again. We’ve got the new property, so we’re building a new house; we’re excited about that.”

Though the end of the line is surely on the horizon, it’s not something Cerrone actively considers.

Right now, it’s time to get back to business.

"I still have the killer drive in me so I am going to take it out on him."@CowboyCerrone talks about finding a new opponent for #UFCVegas26, why he will defeat Alex Morono and his goals for 2021 🔊⬆️ pic.twitter.com/MiWm3PWcvU

Historically, Cerrone has liked to get his fight campaign started fairly early, competing in January or February nine of the previous 10 years. He had hoped to stick to that pacing heading into 2021, but an opportunity to share the Octagon with former teammate-turned-rival Diego Sanchez prompted the veteran gunslinger to amend his plans and accept a later start date.

While he can be cantankerous at times, Cerrone rarely has beef with people he’s about to fight, often laughing when opponents want to talk trash and try to get under his skin at media engagements and weigh-ins, knowing that they’re set to throw down a couple days later at most.

But things with Sanchez became personal after Cerrone departed Jackson-Wink MMA a few years ago, prompting “Cowboy” to attack his training with greater ferocity and focus ahead of this fight. It was personal, and he was hell-bent on handing out some punishment on Saturday night, only for the matchup to come apart last week when Sanchez was released from the promotion.

There was no chance Cerrone was not going to make the walk this weekend, so when the UFC called and offered up Morono as a replacement, “Cowboy” was quick to accept.

“I don’t know much about Alex,” Cerrone began, addressing this weekend’s new matchup. “I know he fought (Anthony) Pettis last, but I was like, ‘Perfect; that’ll work. Great name; let’s go!’”

Now nearly eight months removed from his last appearance and fresh out of a training camp where he was fueled by emotions and vitriol that doesn’t usually become infused with his preparations, the 53-fight veteran is chomping at the bit to release those tensions, and it just so happens that Morono will now be the one sharing the Octagon with him on Saturday. 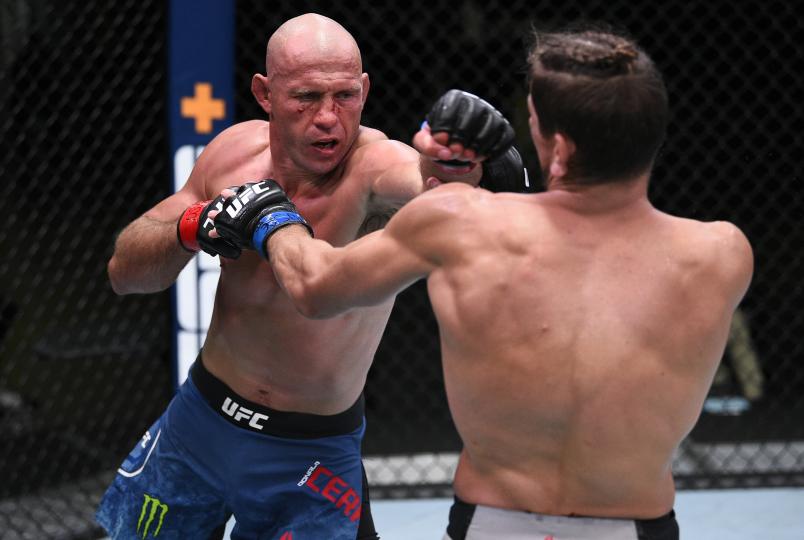 “Absolutely he does,” Cerrone said when asked if Morono has to pay for all the things Sanchez had said in the build up to this weekend’s event. “I feel bad for Alex because all of that built up animosity and built up everything is still there.”

In addition to unleashing the fury that has been building since the bout with Sanchez initially came together, this weekend’s fight card also represents the latest opportunity for Cerrone to end the longest stretch of his career without a victory.

The last time “Cowboy” got his hand raised was just over two years ago in Ottawa, Ontario, Canada, when he outworked Al Iaquinta over 25 minutes to secure a third straight victory and once again establish himself as a contender in the lightweight division. Since then, the UFC’s all-time leader in wins has been stuck on the wrong side of the results, dropping consecutive bouts to Tony Ferguson, Justin Gaethje, Conor McGregor, and Anthony Pettis before battling Niko Price to a majority draw last fall; the result was later ruled a no contest when Price tested positive for marijuana.

Cerrone has long talked about that euphoric feeling that comes with earning a victory inside the Octagon as the high he and many of his contemporaries are constantly chasing every time they step into the cage and put their bodies on the line, and after two years, five fights, and one grueling, tension-filled training camp, the old gunslinger is more than ready to experience that feeling once more.

“I cannot wait,” he said, clearly ready to halt his winless skid and get back into the win column. “I’m more excited than ever.”