Donald Cerrone: A Work in Progress 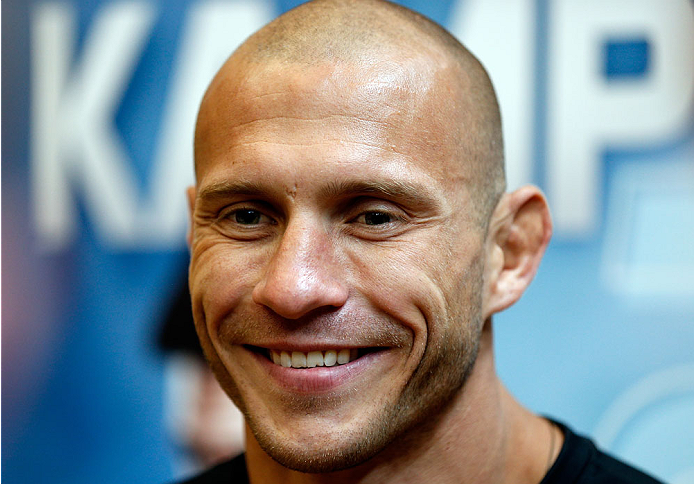 If Donald Cerrone one day wins the UFC lightweight title, the first man he may thank is Kevin Harvick. Yeah, that Kevin Harvick, the NASCAR driver who became friends with the lightweight contender and then signed him to his management company, KHI. And with the deal, Cerrone can now focus on the fighting part of fighting.

“I want to make my life a little easier,” he said. “And they’ve really got it going on. I see how his management and how his agency works when we’re out there at the race with him. They just take care of everything and I like the whole professionalism of how everything he has is handled and dealt with.”

This may come as a shock (note sarcasm), but that’s not always how it goes in the fight game, be it MMA or boxing.

“In the MMA community, it’s not like that,” said Cerrone. “It’s my uncle or my cousin, or ‘hey I know a guy who might be able to get something.’ (Laughs) It’s real unorganized and it’s a hassle. And I’m not just talking about getting my medicals done or getting sponsorships; I’m talking about a grander scale, helping me with my taxes, getting dinner for my family and tickets taken care of, things that I don’t even have to worry about that I think should be handled by your management team during fight week so you don’t have to.”

It’s one of those little things that don’t get a lot of attention, but that can show up on fight night. And yes, despite their deeds in the Octagon, these fighters are regular folks as well, and adding 10,000 little stresses can add up to one big mess when they can least afford it.

“It just wears on you, and they’re energy leeches,” he said of these stresses. “That fight week is the hardest week, when you’re trying to prepare and you’re cutting weight and you’re pissed off.”

The change in Cerrone is noticeable. There are a lot more laughs, he sounds more relaxed, and not only is he showing up to interviews on time, but he’s early.

“Before I would have blown this stuff off,” he laughs, a bellow that grows even louder when I agree with him. “He (Josh Jones of KHI) called me and said ‘what’s a good time for interviews tomorrow?’ I had three of them to do, he sent me an email with the times to call in, and it’s really professional. It makes me feel more part of the team.”

The timing couldn’t have been better for the longtime action hero dubbed “Cowboy.” Winner of nine of his last 11 bouts, with the only losses coming against Anthony Pettis and Nate Diaz, Cerrone knows that what he got away with at 25 doesn’t work anymore at 30. If he’s going to move forward in a tough division, he’s got to mature, and the first step in that direction was his May decision win over KJ Noons, one in which he fought a disciplined three rounder against a fighter trying to take him out of his game.

“The whole time I was on him, he was talking s**t, so it was good for me to not take it to my pride and do what I had to do to stick to my game plan,” said Cerrone, who didn’t follow such advice in his losses to Pettis and Diaz.

“To be honest, my next opponent is me,” said Cerrone, who will also have Rafael dos Anjos to contend with in tomorrow’s UFC Fight Night co-main event in Indianapolis. “I’m trying to work on the mental side of this game and go in there not worrying about talking s**t about Pettis or Diaz and getting all emotionally involved. I need to go out there and fight my fight and worry about that. So the biggest opponent is me and that’s who I’m focused on right now.”

The Noons fight was a positive on that front. Has he permanently turned the corner?

“I would like to say yes, but I don’t believe so,” he laughs. “I need to keep working at it. I don’t think I’ve found the secret yet. It’s always like this for me. I do very well until a big fight. I’ll let you know when the next big fight comes up and everything’s on the line because that’s really where I’m going to need to do all this mental training and stuff that I’ve been working on and make sure I can apply it then.”

Dos Anjos can certainly qualify as a big fight, especially since a win could put him back in title contention and a loss could cripple those hopes for the near future. So is he ready? Judging by his look at the future, it looks like he just might be.