"The overall goal is definitely fighting Henderson and getting that belt
and getting that title, but Pettis is my next guy, and that’s where all
my energy and all my focus has been." Donald Cerrone 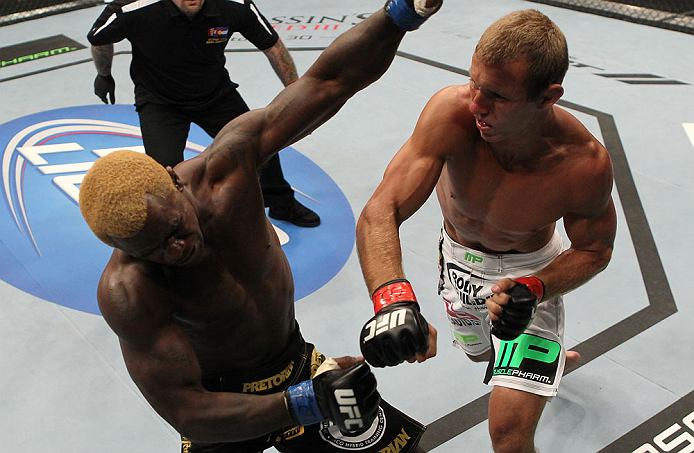 Some may call Donald Cerrone reckless, both in and out of the Octagon. And that may be entirely accurate.

When it’s fight night and he’s throwing hands with his fellow lightweights, he’s not afraid to leave his chin exposed for a second or two or drop his hands if it means getting his opponent to engage in yet another Fight of the Night bonus winning bout. When the fight’s over, you won’t see him relaxing on a beach somewhere or getting in a few rounds on the golf course. Instead, it’s usually something that will give UFC president Dana White nightmares, like wakeboarding or mountain climbing, or maybe even a return to an old endeavor of his, bull riding.

“It was a good time,” said Cerrone of his bull riding past. “There’s something about it that I really enjoyed, the whole cowboy way of life.”

To this day, the lightweight contender from Colorado dreams of at least a one-time “for old time’s sake” ride upon a bull, having made appearances at Pro Bull Riding (PBR) events over the last three years. But White isn’t having it.

“I’ve been there three years in a row and every time I’m trying to rally for it, and he keeps telling me no,” Cerrone laughs. “Maybe this will be the year, but probably not.”

That’s a good thing, not just for Cerrone’s health, but because 2013 is likely to be a busy year for him. Maybe not on the level of 2011, when he fought five times, but at least more than the two times he made it to the Octagon last year, defeating Jeremy Stephens and Melvin Guillard.

“I don’t know what happened,” he said of his rather quiet 2012. “All they gotta do is call me and I’m ready to go, but they just wouldn’t call. My phone wouldn’t ring.”

It makes you afraid to ask what he did to keep himself busy between fights.

“A lot of wakeboarding,” he said.

So something more leisurely like golf is out of the question then?

“The problem with golf is I’m terrible at it,” deadpans Cerrone. “But if you need a guy to drive the golf cart, I’m your man.”

For someone as fearless and dangerous in a fight as “Cowboy” is, it’s almost a complete 180 to hear his self-effacing comments and quick jokes, many aimed squarely in his own direction. But his theory is, if you’re going to live this life, you might as well enjoy it while you have it. And his enjoyment comes from pushing the envelope on a daily basis, and it’s why despite a budding fight career, he continued to ride bulls. Eventually though, he came to a point where he decided that fighting full-time was a better fit for him. What was that moment?

“When I wasn’t really any good at it,” he laughs. “I really did it just for the fun.”

It was a good call, and after paying his dues, his name began to become synonymous with excitement in the lightweight division of the WEC and now the UFC. Seeing the 29-year-old’s name on the marquee is an excuse to blow off your other plans and tune in for the fight, and to say he’s established in the sport would be a bit of an understatement. Yet despite his out of the Octagon search for the next adrenalin rush and his occasional trash talk with future opponents, Cerrone has found time to give back to the sport that has provided him with this lifestyle. He doesn’t make a lot a noise about it, but the ranch he and fellow UFC fighter (and best friend) Leonard Garcia own outside of Albuquerque, New Mexico has been a refuge and fighting college for up and comers hoping to one day get to where Cerrone and Garcia are now.

“I remember when I was trying to come up and get going, and I’d have to go from gym to gym and talk to people and ask people about things,” said Cerrone. “The sport was not as big as it is now, so everyone thought that training with you, they would fight you one day, so it was really hard to get all that accomplished and it kinda angered me a little bit. Then I went down and found Greg Jackson, who was just so open-armed and so open to everything. I love that place and he took me in, and being able to give back and answer all the questions I wish someone could have answered for me is kinda what it’s all about (at the ranch). Being able to talk about sponsorships, talk about money, talk about who to fight and what fight to take, and how to do it, I wish someone was there to answer all those questions for me.”

So what’s it like when one of his guys gets a big win?

Cerrone is in a good mood these days, and not just because he gets to fight for the first time since last August. No, it’s probably because of the person he’s fighting this Saturday on the UFC on FOX 6 card in Chicago, fellow WEC and UFC standout Anthony “Showtime” Pettis. Cerrone has lit into his former comrade from the blue cage for a while now, and even when asked what he sees when he looks at Pettis, he’s quick to say, “You don’t want an honest answer from that, do you?”

“Pettis is a great athlete,” said Cerrone. “He brings a lot to the sport and he’s going to be the best Pettis there. He’s been training hard for this fight, the poor guy had injury after injury after injury, and he’s healed up and ready to go. Unfortunately, I’m the wrong guy to fight after shoulder surgery, so good luck.”

Cerrone, who never faced Pettis back in the UFC, calls getting the long-awaited bout “just a matter of waiting and timing,” and if he gets by the dynamic striker from Milwaukee, there will be plenty of clamor for a third bout (first in the UFC) against the man at the top of the 155-pound heap, champion Benson Henderson, should he get by longtime Strikeforce boss Gilbert Melendez in April. “Cowboy” knows what’s at stake, but in probably the least reckless thing he can do, he’s keeping his eyes where they should be – on Pettis.

“The overall goal is definitely fighting Henderson and getting that belt and getting that title, but Pettis is my next guy, and that’s where all my energy and all my focus has been,” said Cerrone, who may not be riding bulls anymore, but who gets those same feelings every time he’s waiting for his name to be called to fight.

“When you’re back there and rounding up your rope and getting lined up, they call the bulls in, and it’s the same thing as when you’re in the back stretching, getting ready and warmed up (for a fight),” he said. “You’re warming up, you’re focused, you pull your bull, you’re dropping the rope down and you’re worrying about nothing else. You don’t care about the bull in front of you, the bull behind you, what’s going on in the crowd. You’re focusing on what your job at hand is, and that’s going out there and getting after what you’ve got to get after. The two are a lot alike in that aspect as far as getting ready for game day.”

And once you get the call?

“Getting on a bull and riding and getting out there and fighting, those are two totally different things.”