“If I bumped into him in the parking lot and said, `What’s up?’ we’re
throwing down, and I like that mentality. You can’t teach that. They
come to fight, and me too.” - Donald Cerrone on Nate Diaz 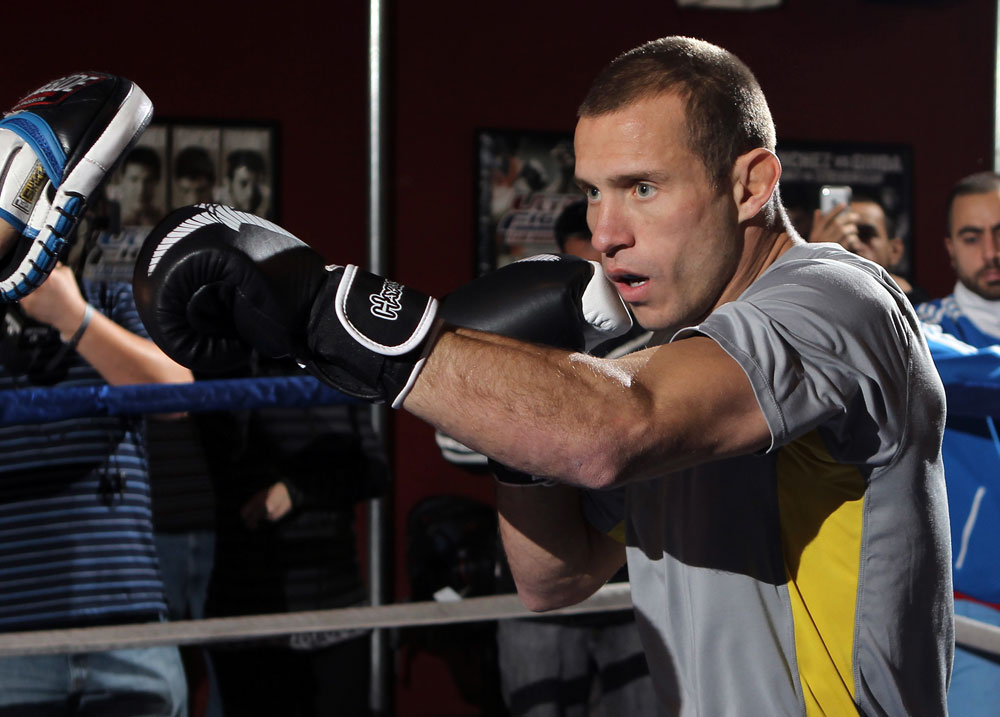 Donald Cerrone doesn’t care where he sits in the rankings.

He doesn’t worry about where critics or fans place him amongst the elite lightweights in the UFC.

Even though he steps into the Octagon on Friday night riding a six-fight winning streak that includes four wins in 2011, three Fight Night bonuses, and back-to-back first-round finishes, “Cowboy” is only concerned with getting another opportunity to step into the cage and collect some more money.

“I could give a s**t who’s over me,” answered Cerrone, the words snapping out with the speed and ferocity of the leg kicks he used to pummel Vagner Rocha at UFC 131 back in June. “It’s pretty much keep going, man. Just keep ‘em coming.”

While 2011 has been a breakout year for Cerrone, he had showed flashes of his potential during his days in the WEC.

A perennial title contender, the 28-year-old battled for the organization’s lightweight belt on three occasions over a six-fight stretch, beginning with his controversial first encounter with Jamie Varner. Never able to emerge with the gold wrapped around his waist, Cerrone slipped into the background slightly as the WEC’s lightweight ranks merged into the UFC’s deepest division.

Reigning champion Anthony Pettis and former titleholder Benson Henderson garnered the majority of the attention in the wake of their classic battle at WEC 53, though Cerrone had earned a victory on the company’s final card as well, submitting Chris Horodecki in the second round. It was his second victory in three months, a follow-up to the dominant win he collected in his long-awaited rematch with Varner a few months earlier.

Like many of his fellow WEC graduates, Cerrone entered the UFC with a chip on his shoulder, ready to show that he was every bit as good as the competitors in the UFC’s 155-pound division.

“The proof is in the pudding there, man,” said the callous “Cowboy,” the chip still maintaining its former address. “There’s not much left to say. We all need someone to doubt on us. Just tell them to keep on doubting on me.”

There are few doubting Cerrone at this point. He’s won four more times over the last ten months, extending the winning streak he began in the WEC to six, propelling himself further up the lightweight rankings with each subsequent victory.

Cerrone stepped in for an injured Sam Stout at UFC 126 in February and submitted Paul Kelly in the second round, earning Submission of the Night honors in the process. Four months later, he thrashed Rocha in Vancouver, but it wasn’t until his last two fights that people really started to sit up and take notice.

“I just feel like I’m hot,” admitted Cerone. “I don’t know, that’s just how life goes, in waves like that. You’ll be on top and then you’re at your lowest time. Right now, I feel good; everything seems to be going right.”

In August, he blitzed youngster Charles Oliveira, crumpling the talented Brazilian under a torrent of strikes. Two months later, he filled in for Stout again and earned a similar result as he had in February, halting Dennis Siver’s climb up the rankings with a first round submission win at UFC 137.

Like many observers, Cerrone believes he’s always had the potential for this kind of success.

“I think I’ve always had it there — it’s just been getting my mind to tell my body what to do, getting my mind right. I’ve been figuring out what it takes for me to fight in the cage the way that I do in practice, you know?”

Heading into the fight with Siver in October, Cerrone made it known that if everything went as planned, he wanted to fight for a fifth time in 2011. UFC matchmaker Joe Silva granted him his wish.

“I’m super-excited. That’s what I asked for so bring it on. Close out the year with another fight — more money, more exposure, more everything.”

Just a few days after UFC 137 was officially in the books, Cerrone was paired with Nate Diaz.

After a four-fight stint as a welterweight, Diaz returned to the lightweight division at UFC 135 in September and picked apart Takanori Gomi, submitting the Japanese veteran in the first round. It was the best performance of his career, and immediately put the former Ultimate Fighter winner in the mix in the 155-pound ranks.

Now the two are matched up in the co-main event slot of the UFC’s year-end event, with the victor likely to earn a place on the short list of title contenders heading into 2012. It’s a pairing that should produce fireworks when the cage door closes on Friday night.

Both Cerrone and Diaz are extremely well rounded, capable of dominating an opponent with their striking or submission games, and transitioning between the two seamlessly.

That’s one way of putting it. Cerrone sums up his opponent’s approach in a much less analytical way.

“He’s game man, for sure. He talks a lot, and he gets in there and fights. I’m excited,” said Cerrone of his opponent, echoing feelings he shared earlier in the month when he praised Diaz and his brother for their approach in the cage.

“If I bumped into him in the parking lot and said, `What’s up?’ we’re throwing down, and I like that mentality. You can’t teach that. They come to fight, and me too.”

Like his older brother, Nate Diaz also knows how to fire up his opponent before they even step into the cage, and he’s done just that with Cerrone. Not that the fiery “Cowboy” really needed any extra motivation.

“Unfortunately, he ran his mouth too much this time, and now he’s going to be in trouble. I’m excited to fight him. Ring the bell. Let’s go!”