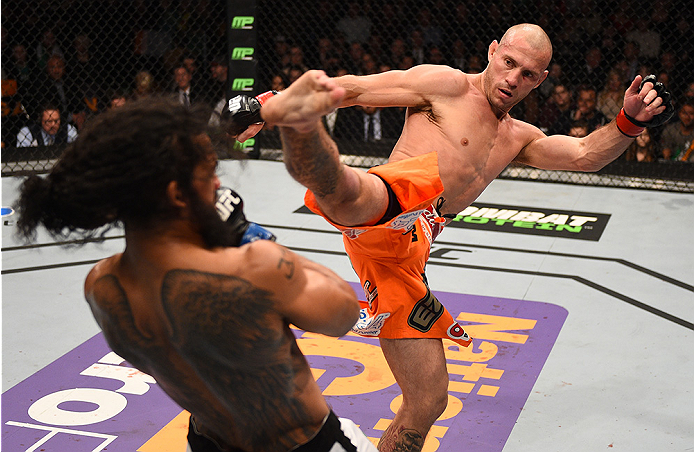 There is a good chance Donald Cerrone doesn’t know what the word “stop” means. In fact, it is probably safe to stretch things a bit further and question his interpretation of the word “slow” as well because whether he’s taking high-profile fights on less than two weeks’ notice or being pulled behind his speed boat on a wakeboard…Cerrone is always on the move.

With the rugged nature of his profession, it would be excusable for a fighter as prolific as Cerrone to square away some personal downtime, but that’s simply not the case. The hard-charging lightweight contender’s methods of relaxation differ from most, as he’s more inclined to see what adventures Mother Nature may yield, rather than pull up and lock down some couch time.

The motivation behind his mindset is Cerrone’s determination to live in the moment and enjoy life in the here and now. And while there have been times throughout his career where balancing his passions has gotten difficult, Cerrone in his current form has become a master of all he surveys.

The proof can be found in the ever-present smile he wears on his face outside of the Octagon, and the seven-fight winning streak he’s collected when the door closes behind him on fight night. The 31-year-old Colorado native has taken every aspect of his game to the next level and it has him knocking on the door to a long-awaited shot at the lightweight crown.

Granted, he’s just “any time, any place, anybody” as he’s ever been, but Cerrone’s current run through what is arguably the most competitive division under the UFC banner has been a different kind of impressive. After all the ups and downs and twists and turns in his career, everything has fallen into place for the Jackson/Winkeljohn-trained fighter.

And while all the acclaim he’s garnered over the past few years is a long time in the making, the Albuquerque transplant doesn’t concern himself with matters of that nature. He’ s going to be himself every step of the way and the rest is simply the rest.

“The media and those things don’t bother me,” Cerrone said. “They are going to ask their questions and they are looking for the answers they need to write their stories. I just keep giving the same one and telling them this is who I am and I’ve always been this way. I don’t know how to answer it any other way than that.”

In a strange turn, Cerrone’s way of doing things has started to catch on in popularity across the current MMA landscape. Where the former WEC title challenger and his good friend and trilogy partner Benson Henderson have been prone to stepping up and taking fights on short notice, the quick turnaround has started to become a trend in recent months.

Due to the increased activity in the UFC’s schedule in 2015, the opportunities for fighters to step up and take advantage of chances that may never materialize again are more abundant than ever before. In fact, up and coming fighters like Max Holloway have cited Cerrone’s approach when asked their reason for stepping up on short notice against dangerous opposition.

When Cerrone hears these things, it not only makes him happy that he can provide that inspiration, but he hopes more and more fighters subscribe to the idea of taking every opportunity available to test their skills and push their boundaries inside the Octagon.

“Hell yeah, I love hearing younger fighters coming up taking my approach,” Cerrone said. “I hear guys all the time saying they’ll fight anyone, anytime, anywhere and I love it. I don’t know if I quite like them taking my lines, but it’s great to see guys ready and willing to step up when the opportunity is there, especially now with how the Reebok money is going to be handed out. Those people who have been fighting twice a year are probably regretting it about now. Here I am sitting with 27 fights with Zuffa and that has put me in a great position. I’ve talked the talk and I’ve walked it every step of the way because that’s what I’m about.

“We are only in this sport for a short amount of time and why not get everything you can out of it? Why not be willing to test yourself against anyone who is willing to step into that cage with you? That’s what I’m all about. I know what I bring to the table and I’m always willing to put my skills on the line against anyone at anytime. I’ve always been that way and it’s great to see my mentality and approach rubbing off on the fighters coming up behind me. I love it, man. I absolutely love it.”

One fighter who was definitely tuned into that train of thought was talented Canadian striker John Makdessi. “The Bull” was coming fresh off his TKO victory over Shane Campbell at UFC 186 on April 25, when news of Khabib Nurmagomedov’s injury and removal from UFC 187 broke throughout the MMA community. The undefeated Dagestani was slated to face Cerrone in Las Vegas on May 23, but a knee injury left the rangy striker without an opponent.

While Makdessi is currently unranked in the lightweight fold, he saw a huge upside in fighting Cerrone and contacted the UFC to put in his bid to land the fight. A short while later, the matchup was confirmed, and the Tristar product will now face the surging contender on the promotion’s annual Memorial Day weekend event.

Yet, where a change of opponent has the potential to throw any fighter off their game, Cerrone isn’t wired like most fighters, as his willingness to take any fight reflects. The reason for this confidence is the team of coaches and training partners that make sure he’s always prepared for any challenge that may come his way.

Whether he’s in the city training with the world renowned squad at Jackson/Winkeljohn’s or in the camp he’s built on his property called the BMF Ranch, Cerrone works hard to ensure he’s always primed and ready to throw down when it’s time to go. And if everything goes to plan with the squad he’s grooming out in the desert, there will be another wave of scrappers exactly like him tearing things up at the highest level in the near future.

“I have this ranch and people always ask me what I grow out there. I always tell them we manufacture and produce bad mother******s. That’s it. Some people raise cattle and other livestock, but we breed some of the best mother******s in the UFC. We are small right now but our team is legit. We are growing and it is like a little family. It’s awesome out here and we love it.”