Donald Cerrone is Fighting ‘For Cowboy’

It’s easy to make cliché, hyperbolic statements about Donald Cerrone’s career, but it’s equally difficult to avoid. In his 14-year mixed martial arts career, he has truly seen it all. He’s gone on eight-fight winning streaks and three-fight skids. He has earned the most wins in UFC history and earned the most Performances Bonuses. He won twice in 15 days, and he had a 14-month stretch between wins.

His stature at the top of the sport earns Cerrone almost universal respect, but at 37 years old, his legendary longevity breeds question marks about motivation. After the birth of his son, Dacson Danger Cerrone, “Cowboy” seemed to find a groove, fast-tracking him to a second UFC title shot. Four losses followed, three of which were by TKO, but naturally, Cerrone wasn’t deterred, and he entered his 36th UFC fight week with a newfound sense of internal motivation.

“I don’t have anything else other than this is for Cowboy,” Cerrone told UFC.com. “I get to look at myself in the mirror and say, ‘Let’s go mother*****.’”

When reflecting on this training camp, Cerrone has nothing but good vibes to report. The crew he had at his BMF Ranch had him looking forward to regular sparring for the first time in years.

While every career has its ebbs and flows through the ups and downs, a unique aspect of Cerrone’s long career is the chance to revisit certain pockets of energy or motivation that some fighters might only experience once or twice. In that sense, Cerrone has also seen every kind of fuel a fighter can use and seems content with self-motivation heading into his September 19 date with Niko Price.

“Everything else has been like I feel like I’m on a run for somebody else,” Cerrone said. “Chasing the title for somebody else. I’m doing this for the fans. I’m doing this for all the naysayers at home. I’m fighting for my grandma or my sister. This one, I didn’t really take no advice from anybody on the outside other than my coaches and just kind of — it’s for me. That’s all I got to say. It’s for me. It’s for fun, so I can’t wait.”

Though his current losing streak might raise questions around whether Cerrone still has it, losing to Tony Ferguson, Justin Gaethje, Conor McGregor and Anthony Pettis, all of whom have held some form of UFC gold, isn’t exactly something at which to scoff. In his three-round loss to Pettis, Cerrone looked his usual self and some clamored that the judges got the score wrong when they gave Pettis the edge on all three cards.

Whether Cerrone agrees with that gallery of people is beside the point, and he is well-aware of that fact, as well.

“You learn that from when you first start fighting - don’t leave it to the decision,” Cerrone said. “I left it to the decision, so people are like, ‘Woulda, shoulda, we think (that),’ and I’m like, ‘Yeah, but it didn’t.’ Nothing I can do. Anthony, good job. Me, f***, another loss. That’s the worst. Four in a row, man. Boo hoo hoo. Yeah, it’s crazy when you think about it like that. Like, f***, four. That burns. But it doesn’t affect me mentally and spiritually.”

For a fighter like “Cowboy,” having a fight lined up certainly helps realign the soul, especially against Niko Price, whom Cerrone faces on fight night.

Although “The Hybrid” has a speckled record inside the Octagon, he’s an all-action fighter like Cerrone with 10 knockouts and three submissions to his name. Not only that, but Price holds one of two upkick finishes in the promotion’s history, which came when he connected his heel to James Vick’s jaw in October 2019. Price also creatively finished Randy Brown in July 2018, landing several hammerfists off his back that knocked the New Yorker out.

Those unorthodox attacks are something Cerrone knows he needs to corral, but he feels like he is stylistically better than Price “across the board.” 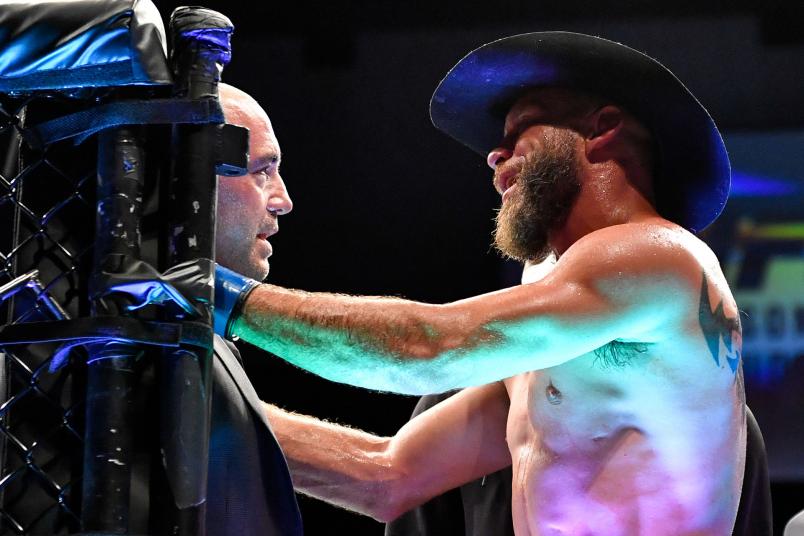 Donald Cerrone (R) of the United States and TV personality Joe Rogan (L) talk after his loss to Anthony Pettis (not pictured) of the United States in the Welterweight fight during UFC 249 at VyStar Veterans Memorial Arena on May 9, 2020 in Jacksonville, Florida. (Photo by Douglas P. DeFelice/Getty Images)

Cerrone Speaks to Joe Rogan (L) after his loss to Anthony Pettis at UFC 249 (Photo by Douglas P. DeFelice/Getty Images)

“It’s hard to stop crazy, for sure, so that’s where he catches a lot of people off guard,” Cerrone said. “Like, ‘What was that?’ He gets hit, and he just keeps coming, so dealing with that durability, I’m just going to have to turn the lights off. That’s the only way to do it. I’m looking for a head kick drop, probably won’t shut him out, and then go and submit him.”

Cerrone predicted the finish to come “probably in the second round,” and while the fight game is notoriously unpredictable, the names slotted in the co-main event are all the evidence you need to assume a Performance or Fight of the Night bonus is likely to come out of this fight.

Speaking of predictors, Cerrone welcomed a second child, Riot River Cerrone, to the world just barely a week ago, which could spell some trouble for Price. When Cerrone fought after Dacson’s birth, he ripped off that three-fight winning streak that had people wondering if this was the motivation Cerrone needed to finally capture the title. That didn’t come to fruition, and Cerrone hasn’t had that same dialogue come along with this birth, but he has enjoyed watching Dacson discover his new life as an older brother.

“(Dacson) just wants to hold him and kiss him and take him (everywhere),” Cerrone said. “He’s so funny because he’s like, ‘Come on, Riot. Come on.’ Well, he can’t walk yet, bubba. It’s just funny how he’s like, ‘Come on, Riot. I’ll get us some chocolate milk,’ and I’m like, ‘Well, he can’t really drink that either.’ He doesn’t quite get it, but kids are cool. I plan on having a couple more.”

An affable Cerrone isn’t a rare sight during fight week, but the conversation keeps circling back to this fight being “for Cowboy” or “for himself.” He seems at peace with that reality.

That begs the question: In his long career, when was the last time he felt like this?