Donald Cerrone: The Climb Back to the Top Begins

"A champion is something I want to be. You always want
to be able to say you are the best in the world. That is the overall
goal." - Donald Cerrone 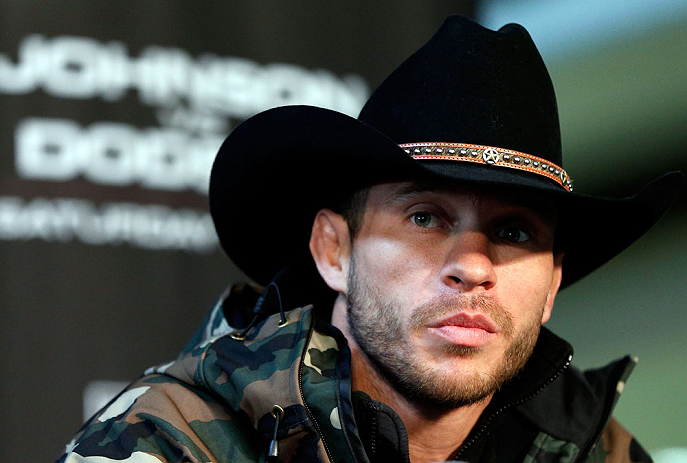 There is perhaps no fighter in mixed martial arts with a more suitable nickname than the one attached to Donald Cerrone. Much like his predecessors from the wild days of the open range, “Cowboy” is of the rough and tumble, hard-scrabble sort who doesn’t mind mixing it up when the opportunity arises. The name isn’t a description for Cerrone; it’s a lifestyle. And one he’s certified to carry.

On a 40-acre ranch outside of Albuquerque, New Mexico he calls “home” from time to time, Cerrone raises livestock and houses a collection of fighters looking to break through in the sport of mixed martial arts. In addition to his life on the ranch, the 30-year-old is also well-known for seeking more adventurous fare when his time outside of training permits, and he has no hesitation to pack up his RV and head out into the wind when the pursuit of something greater hits him.

Bull-riding, rock climbing, wake boarding; you name it and Cerrone has experienced it. If it’s dangerous, the WEC veteran has dabbled in it. While the thought of trading punches, knees, and kicks with another human being is certainly intense enough for most, for Cerrone it is simply a method to pay his bills.

At least that is what it used to be.

Where the Jackson’s MMA trained fighter once sought activity for activity’s sake inside the Octagon, his ascension through the lightweight rankings has brought him to a place amongst the elite in the 155-pound weight class.  Cerrone battered and bruised his way to the top of the division by winning his initial four showings under the UFC banner, putting him within striking distance of a shot at the lightweight title, and this is where things took a sharp turn south.

Suddenly the fight wasn’t simply about determining who the better man was on that particular night. Now, stepping into the cage to scrap carried a greater consequence, where the winner would go on to compete for championship gold, and the man who came up short would find himself reshuffled in the fold.

Those circumstances can be a difficult weight to carry and Cerrone has struggled both times he’s found himself in this situation. The first came against Nate Diaz at UFC 141 and the most recent against former WEC champion Anthony Pettis at UFC on FOX 6 in January of this year. In both fights, the hard-charging fighter with an impeccable love for the throwdown was absent and on both nights he paid a price for it.

But if there is one word that describes Cerrone it is ‘resilient.’ Just like any cowboy who has proudly worn the moniker, he’s conditioned to get up, dust himself off, and get back to business. Certainly his pride was stung in the defeats to Diaz and Pettis - but he’s back on his feet and ready to get after it once again.

“I was at the top of the heap until I got liver kicked and knocked back to the bottom,” Cerrone said. “Now I have to start all over again. I think you have to earn your way up to the top, but when you get there, you have to keep performing.

“When you perform like I did, you deserve to go back to the bottom and work your way back up. I deserved to be up there twice but now I have to get back in there and prove myself. The other guys in the division have to do the same. I have no problems going out there and fighting. I would like to fight more to be honest. But we’ll see.”

He’ll have the opportunity to get back on track when he faces former Elite XC champion KJ Noons this weekend at UFC 160. While Cerrone may not be currently standing at the top of the mountain in the lightweight division, a victory over Noons will be a solid step in his climb upwards.

“KJ is coming to throw down and I’m excited about it,” Cerrone said. “He likes to stand up and let it go. Stylistically it is going to be a hell of a fight and that’s what the crowd wants to see. It should be interesting.

“I’m confident all around in this fight. For this training camp, I’ve been working on my weaknesses and making them my strengths. Every time after a loss, you always try to focus on what you did wrong and what you need to improve on. I feel confident in my ground game but I like to stand, man. I like to throw down and that is what people love to see. I never ever want to go out there and get booed. People like to see fighters come out there and throw and that’s what I love to do.”

Since the doors to the Strikeforce organization officially closed in late January, Noons is one of the final converts to make his official UFC debut. The process is something Cerrone is very familiar with, as he and a collection of his peers from the WEC left the “little blue cage” and joined the UFC roster.

But while fighters from outside organizations are often looked down upon by the MMA community for not being up to par with the fighters competing in the UFC, Cerrone knows the score. He’s had a firsthand view of what top-level competition looks like and he’s certainly not underestimating what Noons brings to the table.

“We did a lot of talking about that back when we were the WEC boys coming over, but the competition is tough wherever you go,” Cerrone said. “Now, if you’re not evolving, you are getting passed up by everybody. I don’t overlook anybody - by no means. It doesn’t matter if they are coming over from a smaller organization like Strikeforce; they are all equally tough. They are not where they are right now because they suck, and by no means am I going to overlook somebody coming over. “

If Cerrone has his way, there will be a ruckus on Memorial Day in Las Vegas. Yet, where getting rowdy for rowdiness’ sake once pulsed through his veins, the order of the day is something the New Mexico-based fighter has slightly adjusted in recent times.

Cerrone is closing in on a decade spent in combat sports. After battling his way through a combined 50 fights in the realms of Muay Thai and mixed martial arts, Cerrone is noticing the instant start machine he once enjoyed now takes a bit of priming as his career progresses. Nevertheless, age is something every Cowboy has to deal with and Cerrone is no different.

“At this stage in my career it’s about getting the right fights and training smarter than I have in the past,” Cerrone said. “I’m just trying to keep my old ass ready to go. I have to warm up just to get out of bed now. Things are a little bit different now. I remember when I first started at Jackson’s, and was running late for practice, I could just roll out of bed, throw my s**t on, and go for it. Now I have to get there and stretch, warm up, get my coffee, and go through the routine. It’s crazy what happens when you get a little older. Now I take a lot of ice baths.”

The former title contender has written several impressive chapters in his career, but also understands there will be a time in the future when his story in mixed martial arts comes to an end. With that in mind, Cerrone still has goals to accomplish and believes he’ll wear championship gold before everything is said and done.

“A champion is something I want to be,” Cerrone said. “You always want to be able to say you are the best in the world. That is the overall goal. But do I mind fighting a lot and being at the top of the pile? No I don’t. But I plan on being a champion before my day is done.”

Before that time expires, Cerrone is going to give everything he has inside the cage. With his next tilt against Noons waiting up around the bend, Cerrone - in classic “Cowboy” fashion - let the fans know what to expect when the cage door closes in Las Vegas.

“S**ttin’ and gettin,” he said as the interview concluded.

That’s the way he handles business because that’s the only way he knows. Stepping into the cage and settling who the better man is is a brutally honest process, and one that is necessary for Cerrone to find the very best in himself.