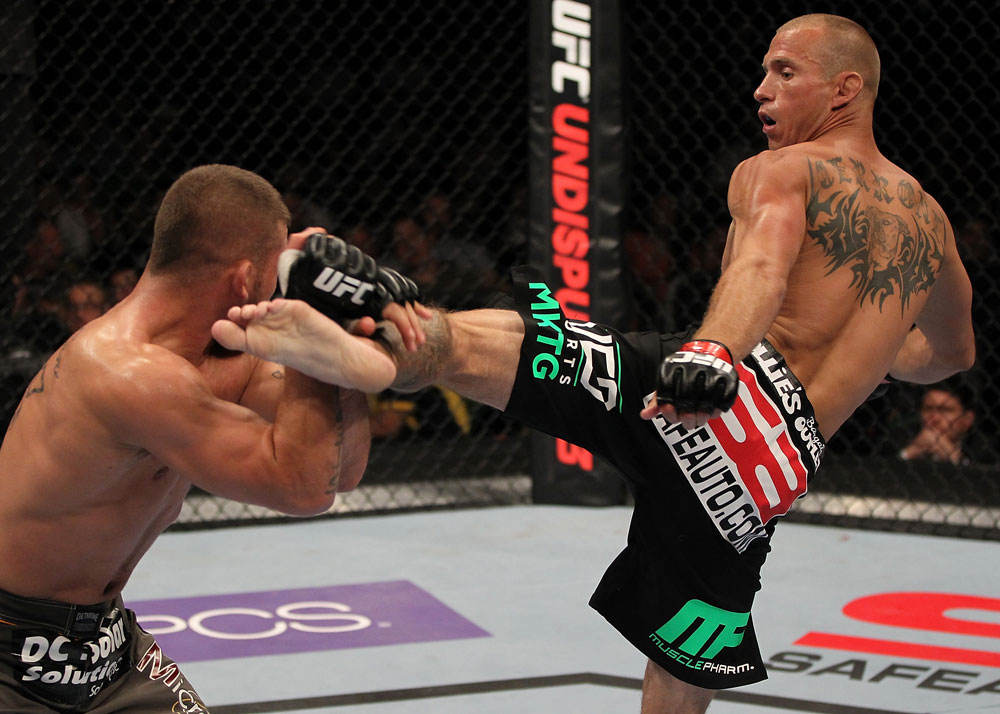 On a night when former lightweight champion Frankie Edgar seeks redemption and Benson Henderson defends his belt for the first time, for Donald “Cowboy” Cerrone, who meets Melvin Guillard in the UFC 150 co-main event, it’s not about legacy or even a shot at the title.

Cowboy has other things on his mind.

“Money motivates me,” he says. “But also, I would like to fight Anthony Pettis and he keeps BS’ing about his shoulder, but Melvin (Guillard) stepped up and took the fight and that’s awesome, but I want to take out Pettis and be the number one contender.”

In a division as deep as lightweight, any fight involving two top ten players could be deemed a number one contender bout, but with Cowboy winning eight of his last ten and dropping fights only to Nate Diaz and the current champion Henderson during that run, he may just be on to something.

Not that he cares.

“I don’t care about a title shot,” he says. “I want to fight Pettis. I hope he takes a fight with me.”

“He fares very well against Melvin,” says Jackson. “Melvin is very explosive and he’s got great timing, and when you get him down it’s hard to keep him there and he’s been well trained for his last six or seven fights with us, so he brings in some good techniques. But Cowboy’s our guy and he’s a great fighter and I think he’s going to win.”

Cowboy and “The Young Assassin” had trained together prior to Guillard’s parting for seemingly greener pastures in South Florida with The Blackzilians, and Cerrone is drawing on his experience in the gym for insight into his next opponent.

“I trained for years with him but that doesn’t bother me,” he said.  “I’ll fight Leonard (Garcia) and he’s my brother. I will fight anybody they put in front of me because it’s business, man. I don’t care. As for Melvin, I have his number, brother, that’s the plan. He’s tough, he’s very athletic and he’s got a lot of things I have to look out for, but I can definitely take him. Melvin will fold as soon as the going gets tough, and it’s going to get tough real quick.”

For Jackson, Guillard represents the second time he will corner against the Blackzilians and a former student. The first rivalry was a well documented light heavyweight title fight between Jon Jones and Rashad Evans.

“A rivalry doesn’t bother me,” says Jackson.” I never get caught up in the hype because I’m here so many times. Maybe if this was my first or second fight I might get caught up in it. But hey, I still love Melvin, I think Melvin is awesome. The Blackzilians were a better fit for him and I hope he’s happy there. Fighting is just business for me, it’s not personal, I’m not like ‘dammit.’ It’s completely business, but Donald’s our guy and we’re going to do everything we can to help him win.”

The awkward reality of fighting a former teammate was illustrated recently in a Tweet from Team Jackson’s Diego Sanchez to Cerrone, which was as “Inside UFC” as it gets.

“Wow you and Melvin??? I was like ‘he took the fight??? after all those ass whoopin’s I seen with my own eyes in training!!!?” Sanchez Tweeted.

Greg Jackson wouldn’t elaborate on Sanchez’s revealing Tweet, but did want to clarify his thoughts on the “Fredo-like” act of discussing family business with people outside the family.

“Donald is a phenomenal fighter and an amazing athlete but I’m not going to go and say who does what in sparring,” says Jackson. “Because if I do that it sets this precedent where now everybody’s worried about sparring and ‘what’s Wink going to say,’ ‘what’s Greg going to say.’ So for me, sparring is a sacred thing you really shouldn’t have to think about. Like, ‘uh oh I had a really bad day.’ I know how it is myself.  I did two rounds today and I’m thinking ‘Good Lord when did it start getting so hard?’ But maybe next Tuesday I’ll have a better day. That’s why I never talk about who does what in sparring.”

Cowboy however, makes it pretty clear that his experience in the gym with Melvin inspires confidence.

“Training with the guy -- if you push him -- even in his fights, when he’s down and he starts doubting himself he breaks pretty easy, he folds up a little bit. But I hope a confident Melvin shows up. I want the best Melvin they got. If he thinks he can beat me, that’s great, I’m here and I want to see it. Just tell Melvin ‘I’m coming to whip your ass.’”

In addition to looking forward to facing Guillard in the Octagon, Cerrone’s hoping to get to Michigan on August 19th to catch his friend, NASCAR great Kevin Harvick, in action at Michigan International Speedway.

“He’s racing the same night I’m fighting, which is kind of a bummer but I’ll catch him the next week at the Pure Michigan 400,” he says.

Cerrone adds that Harvick is more than just a friend, but also an inspiration and a good business adviser.

“We talk a lot, he and his wife (DeLana) always talk to me, and just the other day he texted me ‘Get your ass off the lake because the word ‘champion’ sounds a whole lot better before your name doesn’t it?’, said Cerrone. “He always checks on me, is always pushing, he advises me what to do with my money, and he’s crossed over a couple of NASCAR sponsorships for me to pave the way for me. It’s just cool having him, who has made a lot of money, explain to me how to make a lot of money and then be smart with it.”

With Greg Jackson explaining how to be smart in the cage and Harvick at the bank, Cerrone can focus on fighting. What more can a fighter ask for?

“How about Anthony Pettis?” says Cerrone.