Dominick Cruz: An Update from the Land of Frustration

"All I can do is sit back and wait – get my knee better, perfect what I’m doing, and stay mentally sharp." - Dominick Cruz 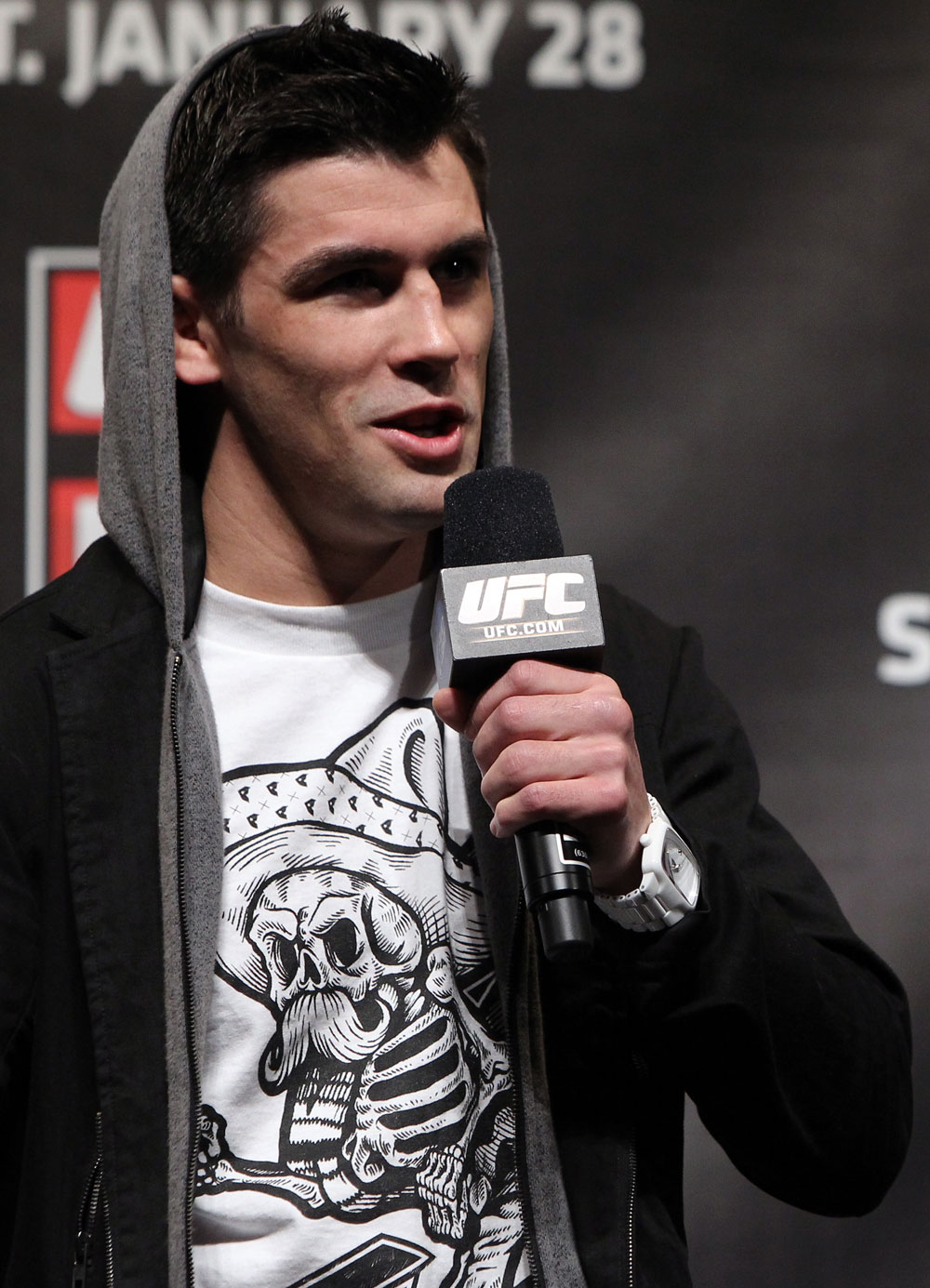 Stuck on the sidelines, Dominick Cruz is in the midst of the toughest fight of his career.

Four months after a torn anterior cruciate ligament (ACL) forced him out of a summer title defense against his nemesis and fellow Ultimate Fighter coach Urijah Faber, the UFC bantamweight champion is fighting his body and his mind as he works towards a clean bill of health. He knows that he taking the right steps – following his physical therapist’s orders, adhering to the rehabilitation schedule set out for him, giving the new construction of his knee time to fuse and strengthen – but he still can’t shake the feeling that he’s not doing enough.

Cruz is what my father would call a “gym rat.”

Though originally embedded in my vocabulary as a descriptor of the basketball fiend who could always be found shooting 15-foot jumpers in the dimmed lights of the dormant gymnasium or working on his handle in the wee hours of the morning, the tag is easily transferable, and is an apt description of the 27-year-old “Dominator” and countless others in mixed martial arts.

The majority of his days are spent in the gym, drilling, grinding, training, preparing. It’s not only what he does to earn a living, but how he identifies himself as well, and right now, that has been taken from him. Just as the basketball junkie would be lost without the ability to shoot foul shots to his heart’s content, Cruz feels like there is something missing since he’s unable to put himself through the daily grind that has been his routine for so long. The only thing keeping him from over-extending and pushing too hard too soon is his belief that suffering through the restrictions of his injury is what being a champion is all about.

“Sometimes being a professional isn’t always about giving 100 percent because right now I’m not allowed to give 100 percent,” opines the injured champion. “If I tried to go put 100 percent into my training right now, I’d blow my knee out. Right now, being a professional is about staying calm, staying very patient, and letting the process take its course. I feel like a true champion can figure out a way to make due with what he’s got, and right now, that’s what I’m trying to do.

“It’s frustrating,” he says with a laugh, answering the obvious follow-up question about how he’s handling the rehabilitation process. “If anything, that’s the one thing you can really get out of this interview. I’m frustrated. I’m ready to train, I’m ready to fight, but I can’t. This is for sure the toughest battle I’ve gone through in my life; no question. My livelihood somewhat depends on my body, and me fighting, me performing, and me practicing, and I’m not able to do that right now.

“It’s a constant mental battle. `Are you doing enough to be the best? Are you doing what you’re supposed to be doing?’ I know deep down inside that I am, but something in the back of my mind - because I’m an athlete, because I train, because that’s what I do and that’s what comes natural to me - something in the back of my brain is always telling me, `You should be doing more.’ The hardest part of physical therapy isn’t the therapy; it’s holding back on the things that I’d like to be doing.”

Not only is Cruz battling the physical limitations that accompany the kind of major injury and surgery he’s experienced, but the always candid champion says he’s also fighting to accept the praise, encouragement, and support being offered up by the legions of UFC fans who are eager to see the man who stands atop the 135-pound weight class healthy and back in action.

“One of the biggest, toughest things for me is the fans – the fans want to see me fight. People want to see the champion out there doing what he does best, and for me to be out, I feel like it’s hard on the fans, and I don’t like that because I appreciate my fans, and I like to be able to go out and perform for them.

“To be going to these big events and not be training is by far the hardest thing ever,” Cruz continues, elaborating on one of the struggles you might not naturally expect a champion to contend with as he comes back from injury.

“In my mind, what I’ve been telling myself since Day 1 is that you can go to every event out there and make yourself as famous as possible, but unless you’re putting the work in, it’s all in vain because none of this continues unless you’re training hard and doing what you’ve got to do to win. In my mind, it’s hard for me to go out there and get all this praise, and get these pats on the back when I can’t go in there and grind myself to the bone, and make myself feel like I deserve all this recognition. It’s hard – that’s the mental struggle and that’s the battle. I challenge myself everyday so that I can feel like I deserve those pats on the back and that I deserve to be champion, and when I can’t go out there and grind myself to the bone, it’s a mental battle for me because I judge myself more than anyone else possibly could.”

While his own quest to get back in the cage is the driving force in his daily routine, Cruz is also spurred on by the increased depth and list of potential challengers coming together in the bantamweight division in his stead.

After he was forced out of his scheduled trilogy bout with Faber this summer, UFC President Dana White inserted surging Brazilian standout Renan Barao in Cruz’s place, an interim bantamweight title adding to the stakes of the bout that ended up headlining UFC 149 in Calgary in late July.  Over five rounds, the Nova Uniao product got the better of the exchanges, beating Faber to the punch and having a counter to much of what “The California Kid” had to offer. Once he finally stopped bounding around the Octagon, Barao’s hand was raised and the newly minted interim title was wrapped around his waist.

“You know, they were fighting for the #1 contender spot in my opinion,” Cruz says of the contest. “I tip my hat to Barao for a great performance that night, and I take nothing from him, but until he fights me, he’s not the true champion. That’s just the way it is, and everybody knows that. I’m not taking away from the performance that he had, but that was for the #1 contender spot; that wasn’t for the championship.

“He’s done a good job to get there, but when he fights me, he’ll get to see what it’s like to fight for a championship belt. All I can do is sit back and wait – get my knee better, perfect what I’m doing, and stay mentally sharp. Him beating that guy that he beat, it was good for the division. Out with the old, in with the new.”

While Barao has asserted himself as the top contender in the division – and has suggested he’d rather wait to face Cruz in the future than defend the interim title he won in Calgary – there are others making noise in the division as well, including one of Cruz’s closest friends, Mike “The Hulk” Easton. The D.C. native has amassed a perfect 3-0 record since making his UFC debut in October 2011, giving him eight consecutive victories overall, and making him an intriguing contender in the division his teammate and chief training partner currently reigns.

“Me and Mike have talked a lot about it because if you don’t talk to your training partners about there being a possibility of fighting them you’re an idiot,” Cruz laughs. “We know there is a possibility, and I wouldn’t want it any other way than to be fighting one of my best friends for the world title. What better circumstances are there than you and your main training partner are the two best guys in the world, and you’re going to fight for that position? In my opinion, we’re doing something right. He’s like family, but that would not stop us from beating the living crap out of each other, and I know he shares that mindset with me. Maybe that’s why we’re such good friends?”

While his injury and inability to step into the cage provides daily frustration and motivation, it also allows Cruz to sit back and assess his dominion from a distance, and keep tabs on those who are lining up to challenge for his title. The way he sees it, the division – and the UFC as a whole – will continue to get deeper and stronger as time marches on.

“The division is developing and the UFC altogether is growing. There are more fights, and as a result, they’re able to bring in more fighters, and the level of competition just keeps rising. Needless to say, the 135-pound division is growing, and keeps getting better.

For right now, the division and the sport are moving forward without him, leaving Cruz to battle his frustrations and limitations while reminding himself that he’s doing the right thing. It’s a constant struggle for the bantamweight champion, but one that he knows leads to a day when he’ll once again be able to step into the Octagon and remind everyone – even himself – why he’s viewed as one of the very best in the sport, and the undisputed ruler of the 135-pound ranks.

“The division never stops; there is always going to be somebody that is the next best contender, and somebody who is looking super-good like they could beat the champ. But the bottom line is that until they get in there and fight the champ, they’ll never know.”