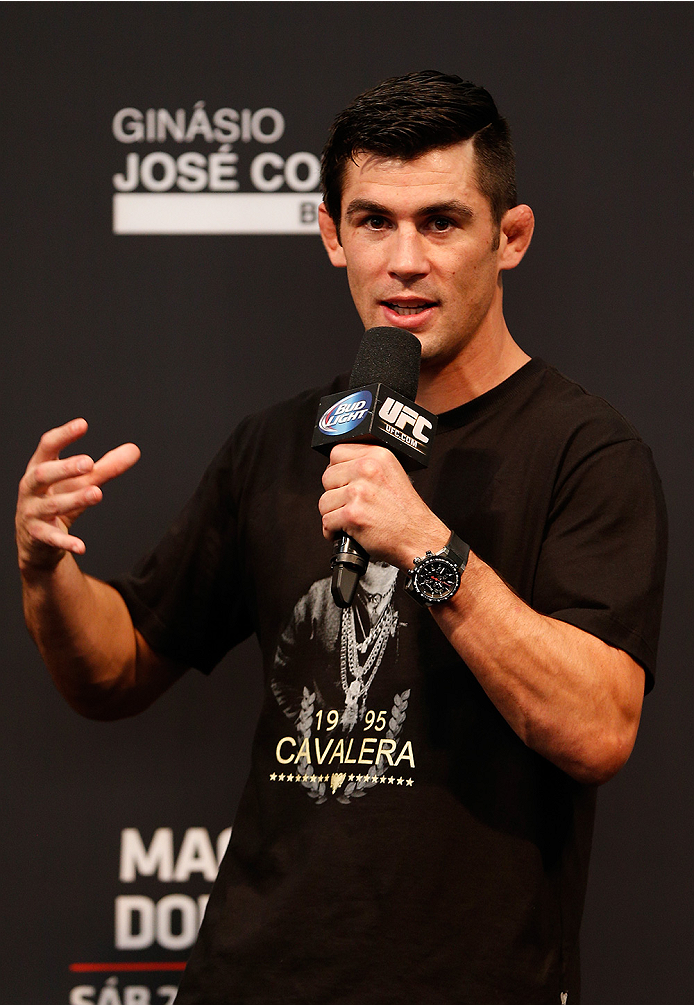 Dominick Cruz knew it the second it happened. He chuckled when he spoke about it with reporters Tuesday afternoon, explaining that he wasn’t doing anything risky or out of the ordinary on December 9, just before he left for his FOX Sports analyst gig to discuss The Ultimate Fighter 20 Finale that weekend.

Cruz was simply drilling, keeping sharp, and then it happened.

“I did fine during sparring, I felt outstanding, and then I was drilling during our live session and when I was drilling, I threw a left high kick and my knee slid out, popped, and I knew I did it right away.”

He had torn the ACL in his right knee. It was time to plot another comeback.

This is almost business as usual for the former UFC bantamweight champion, who lost three years of his career to two ACL surgeries on his left knee, as well as a groin tear. But this time, “The Dominator” promises that he won’t be back in 2017, but late in 2015.

Cruz announced the news on his Facebook page Monday, and while it’s been a tough ordeal for the Californian to have to deal with again, he’s confident that he will be back sooner rather than later.

“I’m going to tell the media to quit saying ‘if’ now,” he said. “It’s when, and I mean that. It’s not a question to me. It’s probably difficult for people to understand that I plan to come back, and how I’m going to come back through this. But the way I look at it is, I’m still relatively young, I still see myself having five to six years in the sport, regardless of what anybody says, and I do believe I’m going to come back stronger.”

The 29-year-old won the UFC bantamweight title in 2010, successfully defending the belt twice against Urijah Faber and Demetrious Johnson before being forced out of a UFC 148 bout against Faber in May of 2012. The first ACL surgery didn’t take after his body rejected the cadaver ACL placed in his knee, forcing another surgery. Cruz would then heal up, but a groin injury involving his quad muscle took him out of a UFC 169 bout with Renan Barao.

Finally, Cruz made a triumphant and spectacular return in September, knocking out Takeya Mizugaki in 61 seconds. The win set up a showdown with current bantamweight champion T.J. Dillashaw in 2015, but now Cruz’ days will involve rehab with Sports Science Lab’s Gavin MacMillan, as he recovers from a surgery he hopes will take place in Los Angeles.

“The worst part of the surgery is the first month,” Cruz said. “So really, I only have a month of absolute hell to get through where I have to do absolutely nothing except stand around on crutches, bend my knee a few times, try to keep loose, take good care of it and ice it.”

At the moment, Cruz will be meeting with doctors on January 15th, and after surgery is done, there is no question that he will continue to fight.

Unfortunately, it’s happened to Cruz more than most. Yet instead of being bitter, he takes a philosophical look at his situation, while looking at others’ lives at well to keep things in perspective.

“This path has been chosen for me,” he said. “Realistically, the way I get through this is I think about the people out there who have real problems. I still have a job, I’m still promoted by the UFC, I still have a job with FOX, I still can be in the gym and help these guys get better. I can still elevate the sport of mixed martial arts, which is my passion, I can still come back and fight and win. There are people out there that are waking up, God bless them, and they have cancer, and they didn’t expect it. There are people going through so much worse, and they need support and they need help. I’ve got an ACL problem, it’s another mountain to climb, and I’m fully capable of handling this mountain.”

He’s done it before, and he won’t be counted out this time.

“The champions and people that aren’t remembered are the ones who just ‘win, win, win, win,’ and nothing happens,” he said. “After all this crap I’ve been through, you can’t help but remember the things that I’m going to do, because I plan on coming back and doing this just as good as ever.”