Dominick Cruz and The Art of Perpetual Motion

“I feel like every time I fight I’m not defending anything. Nobody owns the belt; you just go out there and win a new one every time you fight." - Dominick Cruz 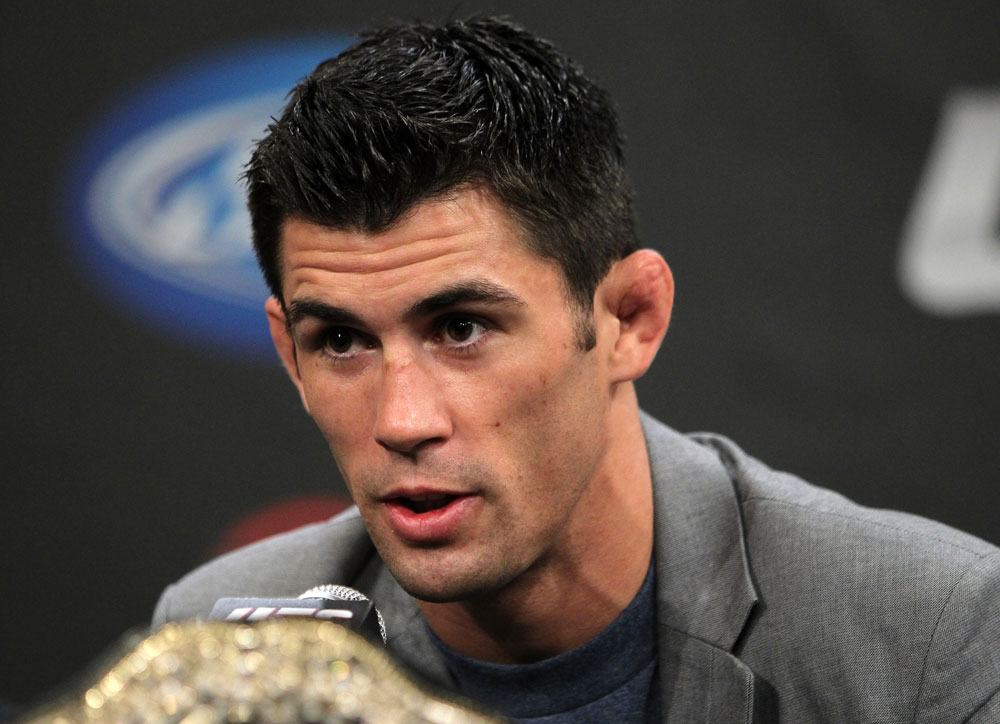 If you look at the top bantamweights in the world, Dominick Cruz has beaten practically all of them. Urijah Faber, Brian Bowles, Joseph Benavidez (twice), and Scott Jorgensen have all fallen at the hands of the UFC champion, but as he prepares for his latest challenge, a Saturday night main event against Demetrious Johnson, there is no more or less pressure on him; it’s just another fight.

“I feel like every time I fight I’m not defending anything,” said Cruz. “Nobody owns the belt; you just go out there and win a new one every time you fight. So this is just another fight. Fighting Faber, beating Faber, that was just another step in my career that I needed to make happen for myself. I did it, I accomplished another one of my goals that I set, and that’s how I look at it. I’m going out to fight another fight, win a new belt, and put a beating on DJ.”

If that sounds like the confident words of a champion, that would be accurate, and Cruz has earned such a right with his performances. Unbeaten at 135 pounds, a weight class he has graced since 2008, the San Diego native won the WEC and UFC versions of the bantamweight title, but he didn’t truly put his stamp on the division until July, when he defeated the only man to beat him as a pro (at featherweight) in Faber. The five round war won Fight of the Night honors at UFC 132, but it wasn’t until the next morning that everything sunk in for the champion.

“It was like a weight off my shoulders,” said Cruz of beating Faber. “There were a lot of emotions tied into that fight, and not just because of the trash talking, but because deep down inside I knew I could beat him, and I knew that I was supposed to beat him. It was something I just had to do and wanted to do. So there was a lot of pressure, and a lot that I put on myself more than anything. I’m my own worst critic, and anything that anybody can say about me, I’ve already said about myself and thought about it, so to lose to Faber the way that I did (in 2007), it wasn’t necessarily that I lost; it was the way that I lost so quickly. I didn’t even get to fight him and he didn’t even get to see who I was. Nobody got to see who I was in that fight. And this last fight, I got to go out there and show it and prove it and get that W. It was an unbelievable feeling, it’s an accomplishment, and I feel really good about it.”

So do the fans that got to witness a bout that lived up to every ounce of the pre-fight hype that surrounded it. Cruz wasn’t surprised though, as he knew the first 135-pound main event in UFC history was going to deliver.

“I knew that he would (bring it) and I knew that I would,” said Cruz. “So I kinda assumed that was something that was gonna take place. I knew that me and him was either gonna be a five round war that was gonna be an awesome fight at a high pace, or I was gonna go out there and sleep him in the first round. I’m always willing to go to war – I invite the war, I accept the war, and I look forward to the war. That’s what it was and I’m glad we were able to put on a good show for the fans and it was something that I expected.”

Saturday’s bout against Johnson, a powerhouse wrestler with lightning-fast takedowns, promises more of the same. The only question is if Cruz, after all the emotions attached to the Faber fight, can go back to the mental well once more just three months later.

“We’re fighting for a world title – if that doesn’t get you hyped up, what does?” said Cruz. “This is fighting on the biggest stage on the planet for the highest accolade you could possibly get in fighting. I’m hyped every single time I fight. I’m hyped to fight somebody new, I’m hyped to have a new problem to solve in there with a different opponent. DJ’s not somebody to look past. That guy beat Miguel Torres and Kid Yamamoto back to back. The guy’s an underdog that loves the underdog role, and uses it well to fuel him. And that’s exactly what he plans on using to fuel himself against me. But it’s not gonna work because I don’t look at him that way. I look at him as just as tough, and tougher in some ways, than Faber was.”

Guess that answers that question. So what about the idea that Cruz, the presumed fastest gun in the division, may be facing someone even faster in Washington State’s “Mighty Mouse”? That’s going to be an intriguing plotline to see play out at Verizon Center, but one that isn’t fazing Cruz too much.

“He’s pretty quick, but everybody’s quick when they’re comfortable or of you fight them a certain way,” counters the champion. “He’s never fought a high-level wrestler except for Kid Yamamoto, and Yamamoto sat down on his punches very hard and was trying to take his head off with every punch, and you can’t fight a guy like Johnson like that because he plans on that and looks forward to you doing that so he can take you down. There’s just a specific way you gotta fight every single person; you can’t fight everyone the same. I don’t think he’s the quickest I’ve fought. How are you gonna say that he’s faster than Faber or Benavidez? He’s just a different kind of fast and he has a different look than anybody else I’ve fought. He’s got a good rhythm, he’s got good timing on his takedowns, and it’s all about fighting him a certain way and making him uncomfortable.”

And if you haven’t watched Cruz in action, let’s just say that perhaps no fighter can make you as uncomfortable as he can. With cardio for days (he’s fought three five rounders in a row), constant movement and a striking style that has you guessing where the next punch is coming from, Cruz is one of those rare athletes that you can’t figure out. And just when you think you have got a bead on him, he switches it up all over again.

“I’m always training, evolving and trying to get better,” said the 26-year old. “You fight me once, I’m one fighter, you fight me another time, I’m a different fighter. And the other thing is, I don’t fight everybody the same. Even though I’ve got the same sort of style, my gameplan for every person is different. I change up my strikes, I change up the angles to a different side, and I have gameplans according to what my opponents do for every fight.”

But the real secret is that he’s not just focusing on himself, but he’s watching everybody else as he rounds out his MMA game.

“I’m always watching everybody,” he said. “I’m a fan of the sport, and I’m learning from every newcomer that comes in and I’m learning from every veteran and I’m trying to grow and improve. I watch tons of boxing and I think it’s an art and it’s beautiful. And I mix that in with my kickboxing and my wrestling. But you can’t just use boxing and go out there and win. You can’t just use Muay Thai and go out there and win. You have to be able to take certain things from every art and you add it to your style. The beautiful thing about MMA is that there’s always something to add.”

With that attitude, his skillset, and the idea that he’s not the champion, but a hungry challenger, Dominick Cruz may be settling in for a long reign at the top. But maybe settling isn’t the right word, because this is one fighter who can never sit still for very long – in or out of the Octagon. And that’s just the way he likes it.

“I live for this,” he said. “I’m having a blast, I’m loving every second of it and I’m taking it all in. You see me after my fights, I put my hands up, close my eyes, and after every win and before every single fight, I’m soaking in the energy and loving every second of this. I’m in the one percentile of the entire planet, I’m doing something that I love to do, and God has blessed me, so it’s unbelievable and I’m loving it.”