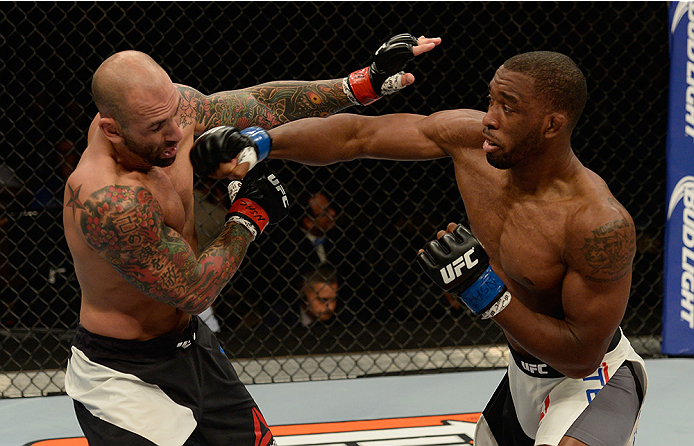 There is a ton of activity and energy floating across the mat space at Jackson/Winkeljohn’s brand new state-of-the-art facility for a Monday morning, but no one is more animated than Dominic Waters. Granted, he’s got competition in the jazzed up collective occupying the gym that morning, but The Ultimate Fighter alum has them all beat cold.

With Holly Holm tipping the MMA world on its head by starching women’s bantamweight superstar Ronda Rousey with a head kick to take championship gold in epic fashion less than 48 hours earlier, the entire Albuquerque collective is abuzz with joy and motivation. Although the world thought “The Preacher’s Daughter” was simply going to be another victim for the 135-pound phenom to steamroll inside the Octagon, her friends and teammates knew otherwise, and there wasn’t a bit of surprise lingering about that Holm had, in fact, got the job done.

And while Waters was just as happy as the next person to see Holm define herself in one of the biggest moments in UFC history, the reason for his happiness had more to do with personal opportunity than anything else. Somewhere in the time between Holm being led to the proverbial gallows and the former boxing great’s crowning achievement under the UFC banner, UFC matchmaker Joe Silva brought an interesting challenge to the California-born welterweight.

A rash of injuries forced a shake-up on the card for the UFC’s debut event in Seoul, South Korea, and the opportunity for Waters to step up was there for the taking. He would be facing perennial contender Dong Hyun Kim and doing so in front of an excited contingent of “Stun Gun’s” countrymen. A short notice fight on the other side of the globe would be enough to make even the most experienced competitor hesitant, but “Shonuff” didn’t waste a second pouncing on the task at hand.

With Kim currently ranked No. 7 in what is arguably the toughest division under the UFC banner, and holding victories over an impressive collection of fighters, the bout against the South Korean represented nothing but upside. This especially rings true, considering Waters was unsuccessful in his official promotional debut back in July, and being the realist that he is, the Albuquerque transplant easily understood that particular caliber of pairing wasn’t commonplace at the highest level of the sport.

Therefore, not only will Waters be seeking redemption when he enters the Octagon to face Kim on Saturday, but he’ll also have the chance to make a thundering statement to the rest of the 170-pound roster. His constant shuffling from teammate to teammate as Monday morning practice is about to get underway provides proof of his excitement, just as his mega-watt smile shows he has every intention of making his visit to South Korea a career-defining one.

“The universe gave me the opportunity and I was ready to accept the challenge,” Waters said. “A lot of fighters in this sport complain and say they don’t get opportunities, but then they aren’t ready when something does come their way. That’s not who I am. I stay ready because the check doesn’t mean anything to me. I want to go out there and open eyes and get the glory. I want people to be screaming my name and be excited to watch me fight. I’m going to go out there and give it all I have and all I have is going to be more than enough.

“I respect Kim for taking this fight. I’m 0-1 in the UFC and he didn’t have to take this fight. I’m not going to lie…I used to watch him fight and think he was cool. He’s a big dude who likes to go out there and mix it up, but I’m 100 percent going out there to whoop his ass. He’s super-aggressive and down to do it anywhere and that gets me fired up. We can have Fight of the Night or whatever type of performance bonus is available, but I’m leaving with more money than I showed up with. I guarantee it.”

While Waters has quickly settled into his new home at New Mexico’s premier MMA’s team, he’s still the new kid on the block in many regards. It wasn’t all too long ago he was living in training in the “Golden State” and struggling to find the confidence to believe he had what it took to find longevity on the sport’s biggest stge.

He knew if that was going to happen, a drastic change needed to be made, so Waters packed up his car and headed east toward Albuquerque. Joining a team that hosts a collection of champions, former titleholders and up-and-coming talent wasn’t going to be an easy task, but Waters’ dedication to self-improvement was clear from the jump, and he made an immediate impression on the two world-renowned coaches whose names are on the front of the building.

“Moving out here was the best decision I ever made. It was hard to leave California and it hurt so bad because it’s just beautiful out there. But I came back here and I’m toughing it out. This gym is the best in the world, man. In other gyms, if we are boxing, we’re boxing, or wrestling then we’re wrestling, but here everything is MMA-based. We are still covering all the singular disciplines, but doing them in an MMA style, and they stress details here.

“I’m stoked to go out there and show what I really have. I made my debut, was a little less than perfect and took the loss. I believe if I hadn’t come here, then I would probably be out of the UFC in another fight or two, but now I believe I can be a staple in the welterweight division. I’m here training every day with some of the best fighters in the world and I can feel myself improving with each and every session.”

Although Waters took the bout against Kim on short notice and wasn’t afforded a lengthy camp to prepare for the bout, that doesn’t mean he didn’t pick up a few dangerous tips from a certified “killer” who also calls the gym home. Back in 2011, Carlos Condit decimated Kim via flying knee knockout in the opening round of their tilt at UFC 132, and the welterweight title challenger in waiting set about helping Waters as soon as news of the fight with Kim broke.

While Waters and Condit differ in their respective styles, the short-notice underdog is supremely confident he’ll be getting his hand raised the same way his teammate did four years prior.

“Carlos is such a cool dude,” Waters said. “As soon as I let him know the fight with Kim was on, he took me off to the side and we got to work. He’s letting me know the game and showing me what Kim’s tendencies are. I’m going to go out there and make everyone in Albuquerque proud.”