Dollaway Seeks to Tame 'The Dragon' 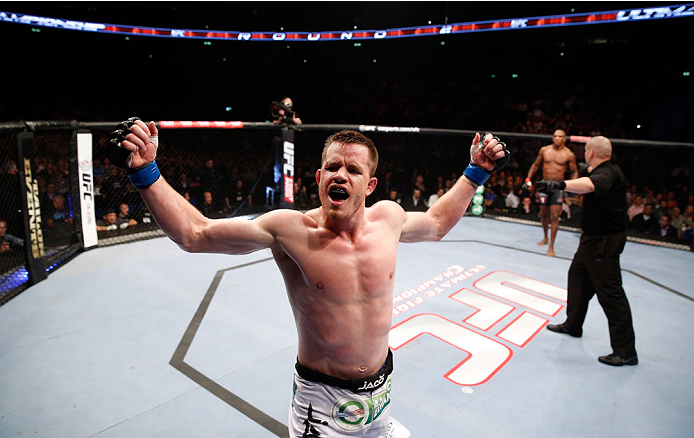 CB Dollaway has no delusions about his fight against Lyoto “The Dragon” Machida at UFC Fight Night: Machida VS. Dollaway this Saturday in Barueri, Brazil.

“It’s the biggest fight of my career,” Dollaway said. “If I can win impressively, I think I have a case for a world title fight.”

Machida has fought and beat some of the greatest fighters in mixed martial arts, and Dollaway is just beginning to face top ten talent. But the former Arizona State All-American wrestler has a healthy perspective on the biggest test of his career.

“I need this fight. I need this victory,” he said emphatically. “I have nothing to lose in this fight. I have everything to gain. Not many people have been able to beat Lyoto. He’s a legend in the sport and I’m still trying to make my name and get to that status. I have to beat a guy like him to get there. If he beats me, everybody is going to say he was supposed to beat me. If I beat him, I can make a name for myself.”

There is so much that comes with “making a name” for one’s self in the UFC. It’s not just competition. Moving up in the ranks by beating a guy like Machida will mean more notoriety, more main event bookings, and more money for one’s family. For Dollaway, that means wife Jenny and daughter Faith.

“When I got into mixed martial arts, to compete is one thing, but if you become a champion you can change your family’s life,” he said. “My wife doesn’t have to work; she can stay home and raise my daughter. My daughter is being raised by her mother, not random strangers in a day care. That makes life so much better. It’s a sacrifice I’ve made and it pays off, and hopefully on December 20th I’ll take one more step to it paying off even more.”

If it sounds like Dollaway is under pressure, that would be an understatement. The man who has been plagued with injuries, including a torn labrum in his waist and a completely reconstructed ankle – has been patient enough to plow through those dark days and earn his first main event. His body is feeling pretty good these days, and the proof is in his winning four of his last five fights. His one loss during this run was a controversial split decision against Tim Boetsch that still leaves Dollaway with a bad taste in his mouth.

But with “The Dragon” breathing fire directly in front of him, there’s no time to look back on bad calls. And “The Doberman” thinks he knows how to train this dragon.

“With Lyoto you have to be patient and set things up as well,” he said. “I happen to love Chess, it’s my favorite game, and that’s how he fights. We’ve studied him, we know what he does and what he doesn’t do, and we also paid a lot of attention to what Chris Weidman was able to do. You have to be patient, and you have to know that if you rush in and make a mistake he can end your night and he will. So you better be damn sure what you think is there is really there, or are you falling into his trap? At the same time you’ve got to know how to pressure him and make him feel uncomfortable. You can’t sit around and wait on what Lyoto is going to do. You have to make things happen.”

Making things happen is what CB has been doing a lot of lately, both in and out of the Octagon. His gym, Power MMA, which he co-owns with Ryan Bader and Aaron Simpson, is firing on all cylinders with a new, professional coaching staff, including strength and conditioning specialists, nutritionists and proper boxing instruction, the latter of which Dollaway credits as the most impactful change to his tool kit.

“My boxing coach (Jose Benavidez) has really helped my overall game,” he said. “I always felt that my stand-up was always my weakest skill set, and everyone knew I would go in there and go for the takedown. Now I have confidence in my hands, I have confidence that I can win wherever the fight goes, and I don’t have to go for the takedown. I can fight on my feet and I can win on my feet. My jiu-jitsu game has gotten better too, which makes me an overall well-rounded fighter. I don’t feel like a fish out of water anymore in certain areas.”

Coming into this fight, Dollaway said he focused on cardio during camp and is leaner than he was for his last Octagon outing.

“I’m almost ten pounds lighter than the last fight,” he said. “Because it’s a five-round fight, I felt like I am going to need the gas, so I eased off the weights a little bit and upped the cardio a lot, which is obviously going to make me leaner and smaller but it is what had to happen so I would have the energy for a five-round fight. I feel like I’m ready to go 25 minutes at 100 percent.”

Of course, the best case scenario for Dollaway is to finish Machida in spectacular fashion, and that is something he has his heart set on doing.

“I’ve always believed that I would get there,” he said. “This is the most important fight of my life, for obvious reasons,” he reiterated. “It’s my first main event and it’s against Lyoto Machida. He’s not going to know what to expect from me. I’m a better fighter today than I was in my last fight. I’m improving every day now that I’m healthy. If I can finish him, I think it has title implications.”