As UFC middleweight CB Dollaway waited last month for news of his next fight, he got away from it all for ten days, not to vacation, but to see a side of life few here get to witness up close.

And though the reason for Dollaway’s trip to Kenya was to aid the Seeds of Change Foundation in their quest to transform education, agriculture and environmental conditions where it’s most needed, he came back home with more than he expected.

“I think it helps you see and appreciate things in your own life,” he said. “You feel like you’re going down there to change their lives and you come back and your life is changed. Especially for me. I get to go and fight people for a living, make good money, I have health care and food on the table every night – of my choice – and cars to get around in. There are people there who walk a couple miles to get their water. It helps put things into perspective and makes you grateful for the things you have.”

It wasn’t an easy trip logistically for the Arizonan, with 35 hours of travel time each way, but it was one he was eager to take when approached by one of his sponsors, American Ethanol, about visiting the people of Kenya to see the work being done by Seeds of Change. 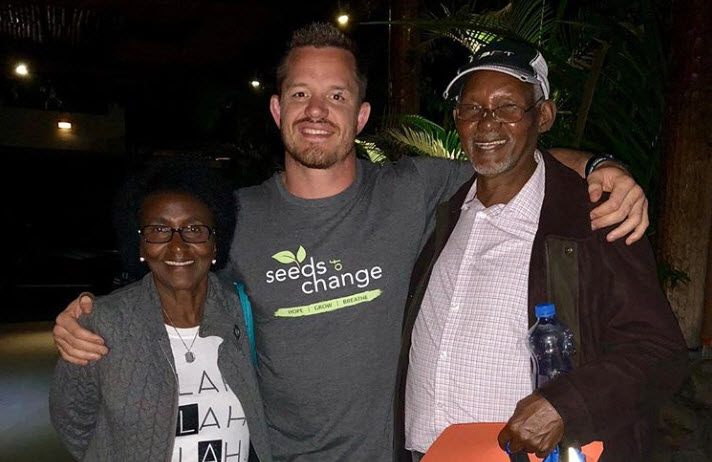 “One of the owners (of American Ethanol) went down there and saw what was going on and how poor they were,” Dollaway said. From agriculture to education and issues with the environment, the Kenyans needed assistance to find solutions to their problems, and slowly but surely, the foundations has been putting a dent in those problems.

One area where Dollaway saw the growth was in a local school for the deaf.

“They started with three little sheds,” he said. “Now they have these pretty good sized buildings and dorms and it’s all been through Seeds of Change and people going down there and helping build and helping to raise money for them. There were six students when they started, now they’re upwards of 70.”

And the students in all the schools there love having the chance to get an education.

“They’re begging to go to school and so happy to go, while our kids here don’t want to,” he said. “Two girls that the foundation sponsored are going to college now and they had tears in their eyes about the ability to further their education and actually go to school.”

There were probably tears of joy in the girls from another local school when their basketball team played Dollaway and the other visitors in a little full court game.

“I have video of it, but I can’t show it to you,” said Dollaway, glossing over the final result before being asked to reveal it.

“They pulled off the victory,” he said. “They got us by two points.”

He laughs, and you can hear his voice perk up when he talks about his interactions with the people of Kenya. 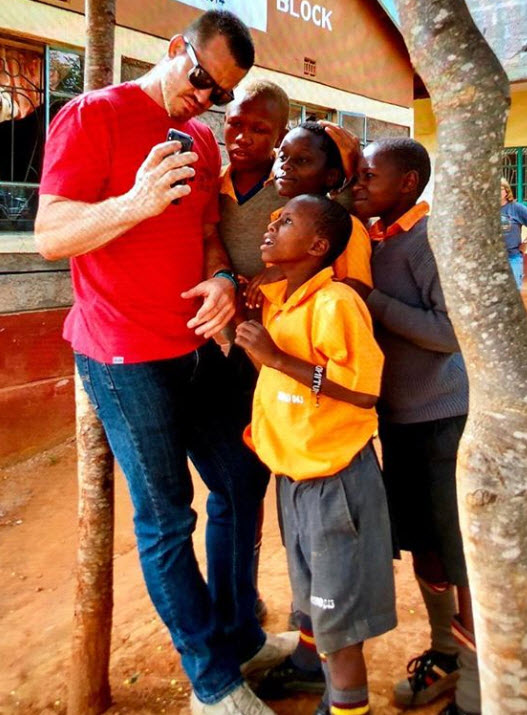 “Only about three groups a year come and visit,” he said. “So it’s really a big deal for them to have us down there. They want to talk to you and see your pictures on your phone, your family, they want you to take pictures of them. And you realize that they don’t have a lot of material possessions, but they have people who care about them. They treat each other like brother and sister, they have family and community, and they’re generally happy. They don’t worry about the material stuff. They’re getting along day to day.”

He describes an opening ceremony that involved singing and dancing and I asked if that video got lost too.

“I would show that one because I’m a phenomenal dancer,” he deadpans. “It may look like I’m shadowboxing, but I’m really dancing.”

Needless to say, it was a trip the 34-year-old won’t soon forget on several levels.

“I’ve traveled before and been to some rough parts of Brazil, but that didn’t compare to how these people are living,” he said. “I haven’t been in the favelas of Brazil, but I would imagine it’s very similar. Dirt floors, hardly any electricity, their power comes from small solar panels, and generally you won’t see a TV in the home or cell phones or cameras.

“Foodwise, they only get protein generally about twice a month because meat’s an expense. When I was down there I think I put on 15 pounds because every meal is carbohydrates. So it was definitely a culture shock. And the hotels we were staying in were pretty rough. Your bathroom and shower were in the same stall. In other places, they didn’t even have a shower; you just got a bucket of water and took it in there with you and you’d rinse yourself off.”

A culture shock indeed, but one that Dollaway adjusted to quickly thanks to the gracious nature of his hosts. And when he got back to America, a quote from Oprah Winfrey stuck out in his head:

“It was probably one of the most beneficial trips of my life, to tell you the truth,” he said. “Going and seeing people with so little being so happy, it reminded me that we’re spoiled here in America. People here are complaining that they don’t have the new iPhone, so life sucks, and then you see these kids playing with an old tire and a stick, running around with no shoes. It was so awesome to see how appreciative they were of everything and to be able to help. It was good for us to go down there and show that people care about them.”

For more information on the Seeds of Change Foundation, visit www.seedsofchange.org