Dollaway Returns to the Grind against Sarafian

"I feel like my best years are still ahead of me." - CB Dollaway 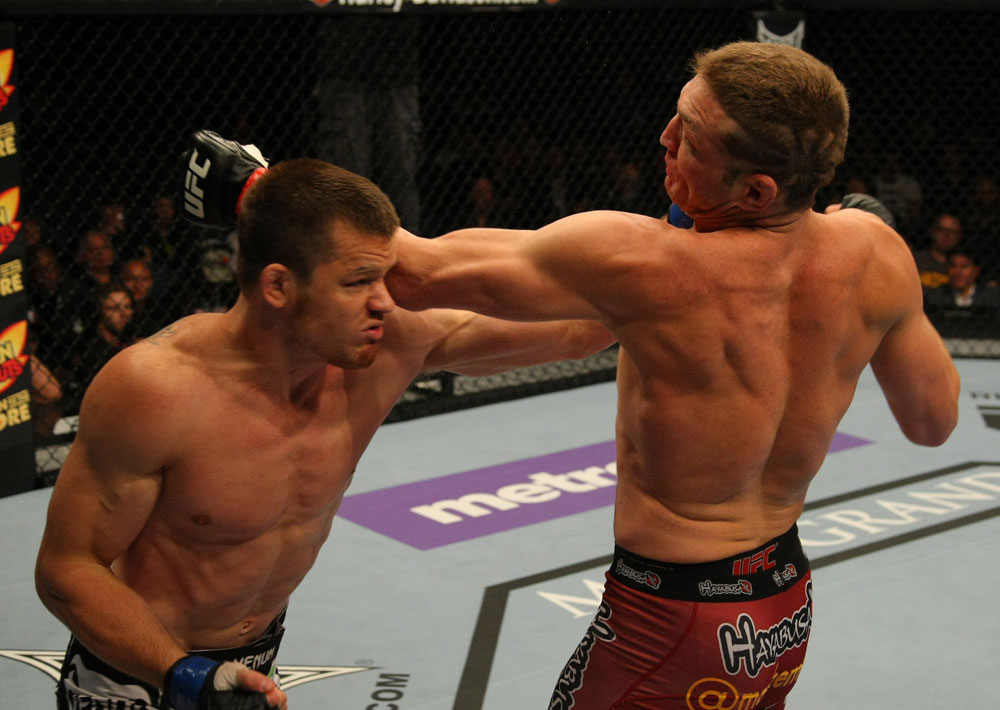 It’s been a long journey filled with ups and downs, but CB Dollaway is back, and he intends to let the world know on Saturday night at UFC on FX 7.

Following his loss at the season seven finale of The Ultimate Fighter to Amir Sadollah, “The Doberman” went on an impressive run, collecting victories in five out of six showings. With every step, the Ohio native appeared to be making solid progress as he earned two Submission of the Night bonuses along the way.

Unfortunately for the 29-year-old Dollaway, all the momentum would skid to a halt in 2011. The former Arizona State wrestling standout suffered back-to-back defeats, and following losses to Mark Munoz and Jared Hamman, an injury to his hip which required surgery would put Dollaway on the sidelines until the spring of 2012.

“It feels good to be back and healthy,” Dollaway said. “I was coming off a hip surgery going into my last fight and things feel like they are getting back to where they should be. I had a good performance against Miller, but I think this one will be better. I’ve had a longer layoff than normal, but I think that will play to my advantage. It gave me more time to get stronger, get my size back on me, and get everything adjusted again. I’m pretty pumped to get back in there.”

The opportunity to get back into the Octagon will come under unique circumstances, as Dollaway will travel to Sao Paulo, Brazil, to face fellow TUF alum Daniel Sarafian. As a member of Team Belfort on the inaugural season of The Ultimate Fighter: Brazil, Sarafian made quite the impact as he battled his way to the tournament finals. In a bad turn of events, the 30-year-old would suffer an injury which would force him out of his finale bout, therefore hitting the pause button on his official Octagon debut.

When it comes to experience on the sport’s biggest stage, Dollaway will have a drastic advantage. That being said, fighting in Brazil has proven to be a difficult task for American born fighters, but rather than let the mystique get into his head, Dollaway is embracing the trip in all aspects.

“Brazil is somewhere I’ve always wanted to visit, and to get the opportunity to fight in front of the Brazilian crowd should be quite the experience,” Dollaway said. “I know I’m not going to be the favorite since I am fighting a Brazilian, but they are great fans. They are big fans of mixed martial arts and I think it is going to be a good time.

“I think it is a great matchup. [Sarafian] is very well-versed on the ground. That’s my background as well. The interesting thing I believe will be the height difference. I’ve never faced a fighter as compact as he is. That will probably present some new challenges for me. I’m going to see how my wrestling works and see if I can get underneath him. It will be a different experience. I’m bringing a high-paced fight. Expect to see the old CB Dollaway, where I come right out and get after him.”

“I definitely think experience is going to be in my favor,” Dollaway added. “I remember making my UFC debut and you do have a little bit of nerves. I don’t know how big the stages he’s competed on outside the UFC are, but being a co-main event in your first UFC appearance is a big deal. He’s going to have all the pressure on him since he is the hometown guy. That is a lot of pressure. This will be my 11th UFC fight. I’m settled in and I feel like a veteran now. It’s the same old story.”

Helping prepare Dollaway for his bout in Brazil are fellow UFC veterans Ryan Bader and Aaron Simpson. The trio, along with Mike Miller of the Miami Heat, own Power MMA & Fitness, located in Gilbert, Arizona. Where the former All-American wrestler was once forced to travel all over the Phoenix area to get in the training he needs, now Dollaway barely has to leave his backyard in order to get proper preparation.  It allows him to be a constant presence in the gym, and if Dollaway is going to reach his goals, his Midwestern work ethic is going to make sure he’s putting in the hours.

“It’s huge having everything under one roof,” Dollaway said. “I live really close to the gym, about a mile and a half away, and it is great not having to travel to get everything I need. It is a huge relief not having to fight with traffic and travel 40 minutes to get some training in. It’s all just right up the street. I spend a lot of time in there and I’m always in the gym teaching or training. I’m always there. I’m always getting better and I think it is going to pay huge dividends in this fight.