Dodson trying to take over the world - as a bantamweight

John Dodson arrived in the UFC as an instant contender, showcasing electric movement and surprising power in winning the bantamweight competition on Season 14 of The Ultimate Fighter.

To claim the etched glass trophy awarded to the victor, the Albuquerque native and Jackson-Wink fixture scored a first-round knockout win over TJ Dillashaw, who would go on to claim bantamweight gold seven fights, and less than three years, later. Rather than stay in the 135-pound ranks, Dodson departed for the newly formed flyweight division with the intention of claiming gold there before moving back up and doing the same at both bantamweight and featherweight.

Like Pinky and The Brain, he wanted to take over the world, but his plans for divisional domination hit a roadblock – twice – in the form of reigning flyweight champ Demetrious Johnson. After decisioning “The Magician” in a close battle in January 2013, “Mighty Mouse” made it look effortless in their second meeting back in September, sweeping the scorecards and sending Dodson to hang out with Joseph Benavidez in championship contender purgatory.

But rather than remain at flyweight, where another shot at gold would be a long way off, Dodson has opted to change things up and return to the bantamweight ranks where he registered his first UFC win. Though the division has changed and the blueprint may have been amended, Dodson’s plan is the same as it is every night: try and take over the world.

“It sucks – I can’t even lie – but it doesn’t mean I can’t go back down,” Dodson says of coming up short in his second attempt to claim flyweight gold. “It just means I need to start my conquest in a different division.

“I can still try to get those three belts, but I have to make sure I go out there, push harder, destroy everyone in the bantamweight division and then when the time comes for me to go back down, I’ll go down and take it over, that’s for sure.”

Losing never feels good, but the sting of Dodson’s second failed attempt at claiming flyweight gold was extra intense, as fans questioned his focus and preparation heading into the bout because of a pair of major family events that took place in the days leading up to the fight.
RELATAED CONTENT: John Dodson fighter bio | Matchup with Gamburyan | Watch: Dodson defeat Dillashaw in TUF 14 Finale

After landing in Las Vegas at the beginning of fight week, Dodson made an unexpected return to Albuquerque for the birth of his daughter, Delilah, who arrived a couple days ahead of schedule. Late in the week and back in Vegas, he posted pictures on Instagram celebrating his mom’s birthday.

“It hit me a little hard because it made it seem like I lost because I wasn’t paying attention to what was going on and I was distracted, which wasn’t true,” Dodson explains. ”I prepared myself for the fight, got ready, did what I was supposed to and the only thing that was different is that I had my daughter and my mom’s birthday.”

With that fight and the flyweight division as a whole behind him, Dodson looks to begin his march towards the top of the bantamweight division with a matchup against Manny Gamburyan this weekend in Tampa, Florida. 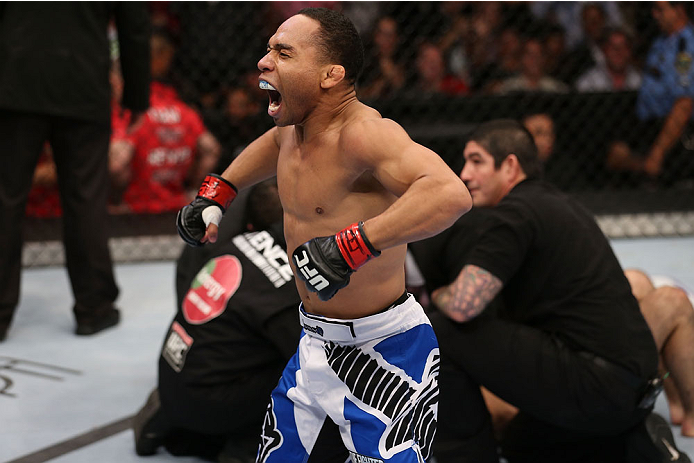 Like the man he’ll face this weekend, Gamburyan has fought in various divisions over the course of his career, collecting victories at lightweight, featherweight and bantamweight. A former TUF finalist and one-time featherweight title challenger in the WEC, the 34-year-old Armenian is two-for-two since shifting to the 135-pound division, collecting wins over Cody Gibson and Scott Jorgensen heading into this weekend’s battle with Dodson, which serves as the UFC FIGHT PASS featured prelim for Saturday’s event.

For Dodson, this weekend’s fight with Gamburyan represents a fresh start – an opportunity to hit the reset button and return to being “the hunter” rather than staying put at flyweight and becoming a guy emerging contenders try to knock off in hopes of earning a title shot of their own.

“It means I have somewhere to move in the rankings,” Dodson says of switching divisions. “Am I going to be the guy that is going to be a placeholder or a judgment-type person when I have to sit there and knock everybody else out and the one guy I can’t knock out is the champion? That would be very frustrating. At least this way I can move to a new division, new weight class and new rankings and test myself in new waters.

“And I am excited to fight Manny because he’s such a gamer. He’s willing to go out there and fight the best and it doesn’t matter what weight class – he’s willing to exchange.

“He took that fight with Jose Aldo and people thought he wasn’t going to be able to do anything,” Dodson continues, citing Gamburyan’s WEC 51 showdown with then-champion Jose Aldo. “But then he started landing some heavy shots and suddenly it was, ‘This fight could go his way.’

“He is one of those dudes that is down for whatever and he’s going to come out swinging for the fences, looking to make me pay for everything that I do and I can’t wait for it.”