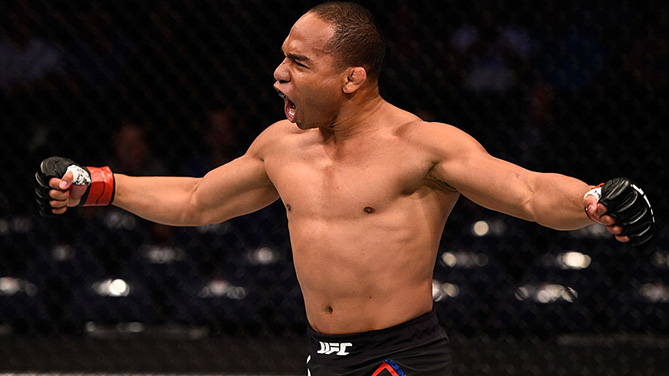 UFC bantamweight contender John Dodson has always appeared to be an old soul, but who would have guessed that his old soul extended back to 1993, when weight classes weren’t even a thought in the then-brand new UFC.

“If Conor McGregor can go to welterweight, why can’t I go to heavyweight,” Dodson asks, ready to do a little verbal sparring on the hypothetical issue of a 135-pound fighter battling it out with opponents who have a hundred or more pounds on him.

“It would be me moving a lot and him getting hit way too many times,” he said of a fight with a heavyweight. “And by that time, he gets tired and embarrassed that I’m touching him up so much that he’s gonna lay on top of me.”

He’s seriously thought about this?

“Sometimes, because I always wanted to see how well it works,” Dodson said. “I think people like the fact that they have weight classes and they can be more dominant. But if I want to consider myself the pound-for-pound best, I would like to go ahead and test my skills out in other weight classes.”

Needless to say, Dodson’s goal of winning three divisional titles in the UFC at 125, 135 and 145 pounds is still alive.

“I never lost focus on that,” the two-time flyweight title challenger said. “I just gotta make sure I get one title, then I can start working on the other ones.”

It’s a good strategy, and he can take a big step towards a crack at Dominick Cruz’s bantamweight crown if he can stop the five-fight winning streak of John Lineker in this Saturday’s UFC Fight Night main event in Portland, Oregon. It’s an important bout for “The Magician” and the fans who’ve been waiting to see the clash of speed vs. power, but then again, Dodson gets amped up for each walk to the Octagon.

“I get excited for every, single fight,” he said. “It’s one of the most exciting things to do, knowing that I can do something I love every day.”

This one doesn’t have more excitement attached to it, though?

“No, not really,” he said. “This one has more excitement on it in itself because John Lineker wants to throw heavy hands with me and I have heavy hands. So I just want to see who’s gonna come out on top.”

“And we already know that’s gonna be me.”

Dodson laughs, but he’s being serious. If you matched him up with Stipe Miocic, Daniel Cormier and Michael Bisping in a row on the same night, he would probably believe he would win. So to fight someone the same size, well, you know the answer to that one, regardless of the fact that Lineker may be the hardest puncher he’s ever faced. Dodson doesn’t necessarily agree, saying the hardest punchers he’s been in with are, “Everyone at ‘35. But you’ve seen TJ Dillashaw and I put him to sleep too. Manny Gamburyan had a prime opportunity with his heavy hands as well.”

Gamburyan didn’t get much of a chance in their April fight, with Dodson finishing “The Anvil” in 37 seconds.

“That’s what I plan on doing with this fight as well.”

It must be nice to have that type of power, but Dodson’s true calling card is his speed, and in this sport - or any combat sport for that matter - the adage “speed kills” is a legitimate one, and the 32-year-old New Mexico native knows it.

“It’s an amazing feeling because I can go ahead and be as elusive as I want to and I can stay in the pocket to throw those heavy shots and I know they’re gonna land,” he said. “I want to be as efficient as possible with certain strikes, and I can be in and out and make sure that if I miss those opportunities to get my hands up, my speed can go ahead and get me out of harm’s way.”

But having such tools in his back pocket can also get a fighter complacent and too reliant on them to get him out of trouble. Dodson is secure that he’s not one of those guys.

“You’ve got to be aware of certain things,” he said. “You know that you have those things in your pocket if you need to pull them out, but you’ve got to rely on the tools and the foundation to do those things. Without a solid foundation, everything else is gonna crumble. It doesn’t matter how beautiful the structure looks if it’s not sitting on top of something solid.”

Sounds like John Dodson has got all his ducks in a row for a run at bantamweight gold, and maybe even more if the old soul in him gets his way.

“I know I can have a successful run,” he said. “It’s not a matter of if I believe in it or not; I know. I believe one hundred percent that I’m the best fighter in the world, no matter what weight class it is. I can even go to heavyweight and I think I can sit there and outdo anybody in that weight class.”