Dodson is fired up and frustrated 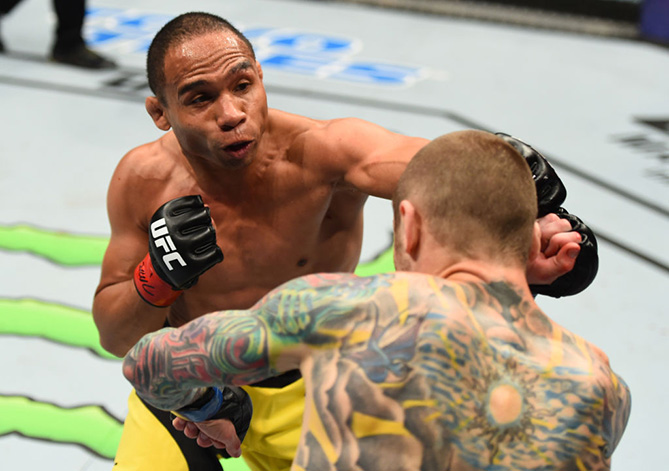 John Dodson punches Eddie Wineland during the UFC Fight Night event on April 22, 2017 in Nashville, TN. (Photo by Jeff Bottari/Zuffa LLC)" align="center" /> John Dodson is fired up and frustrated in advance of his co-main event assignment opposite Pedro Munhoz this weekend in Belem.

After returning to the bantamweight ranks with a swift knockout of Manvel Gamburyan just under two years ago, the former Ultimate Fighter winner has come away from two of his last three contests on the wrong side of split decision verdicts. In both instances, Dodson put up quality numbers according to Fight Metric, but his penchant for being evasive seems to have been his downfall.

Additionally, both losses came against Brazilian fighters and now he’s set to face another, and this time he’s ceding home court advantage to his opponent, so he’s hoping to keep the judges out of things.

“The split decision losses I’ve been having and have been reoccurring infinitely have been against Brazilians and now I’m going out to Brazil to fight another Brazilian, so the level of frustration is getting to a critical level,” laughed the always-upbeat Dodson. “It’s like critical mass over here, which means I need to go out there and get back to my knockout ways before anything happens, so this going to be my pre-emptive strike in hostile territory.”

While he’s able to put a comedic spin on his split decision frustrations, the truth is that the talented Jackson-Wink MMA Academy staple is understandably unsure about what he needs to do in order to turn the scorecards in his favor every time out.

Dodson is quick and powerful and deploys those attributes in sudden bursts of offense, crashing in to throw combinations before circling into space. 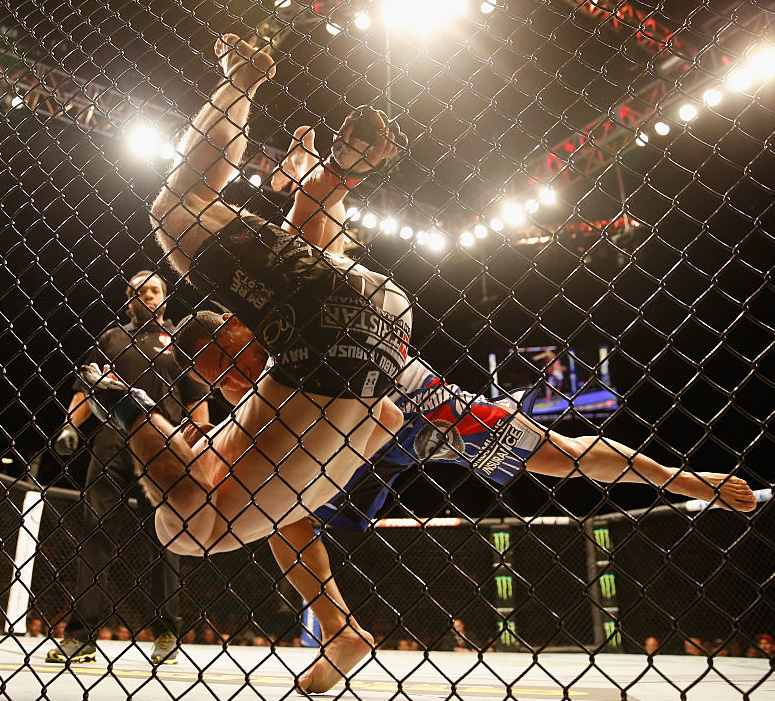 Zach Makovsky during UFC 187 on May 23, 2015 in Las Vegas, NV. (Photo by Christian Petersen/Zuffa LLC)" align="left" />It’s a sped up version of the game plan deployed by his long-time teammate Carlos Condit against Nick Diaz back at UFC 143 and while the Stockton-born fighter’s loyalists continue to insist that he deserved the decision, most have come to recognize that “The Natural Born Killer” fought a smart, tactical fight and did enough to get the nod.

Dodson feels he’s done the same in each of his two recent split decisions losses and genuinely seems confused when it comes to trying to figure out how to convince the three officials scoring the bout to recognize that.

“It sucks because they don’t see effective striking as effective striking; they see it as being scared to engage, I guess,” lamented Dodson, who came out on the wrong side of the 2-1 split against both John Lineker and Marlon Moraes. “But if you look at when I fought Lineker, I outlanded him. That’s a weirdly strange statistic seeing as I was the one who came away on the losing end of the outcome.

“Then I went to go with Marlon Moraes and they said I didn’t secure enough takedowns, but I secured two takedowns and he only secured one. So I’m confused about what they’re really looking for because even in that fight I landed more total strikes.

“It baffles me as to what they’re looking for when I fight.,’ he added. “Are they looking for something magical or spectacular? I know my nickname is ‘The Magician,’ but I can’t pull a rabbit out of my hat every single time.”

Rather than employing the same tactics and hoping for a different result, Dodson intends to use Saturday’s contest against Munhoz as a chance to change things up.

The 31-year-old Sao Paulo native enters on a four-fight winning streak, having secured three of those victories with his patented guillotine choke, the closest thing to a WWE-style finisher as there is in the UFC today. His current hot streak coincides with his move to South Florida to train at American Top Team, and fighting in Brazil, you can be sure “The Young Punisher” will have the full support of the partisan crowd in Belem.

While Dodson recognizes how effective Munhoz has been with his trademark choke in recent outings, he sees it as the only path to victory for the Brazilian and he has no intention of allowing the submission ace to get anywhere near his neck on Saturday night.

“If (the judges) don’t like me being evasive, I guess I’m just going to have to stand in the pocket and bang it out,” said Dodson, happy to reveal his plan of attack. “I know that sounds weird, but I’m going to sit there and stay on my toes.

“We’ve seen that he has a phenomenal guillotine choke, but that seems to be the only place he can win a fight,” he said of Munhoz. “He can’t win it by striking with anybody and he can’t outstrike me because I’m faster, I hit harder and my movement is going to be way better than his, so if the only factor that is going to decide it is that he walks forward, I need to make him change directions from him going forward to him going backwards. 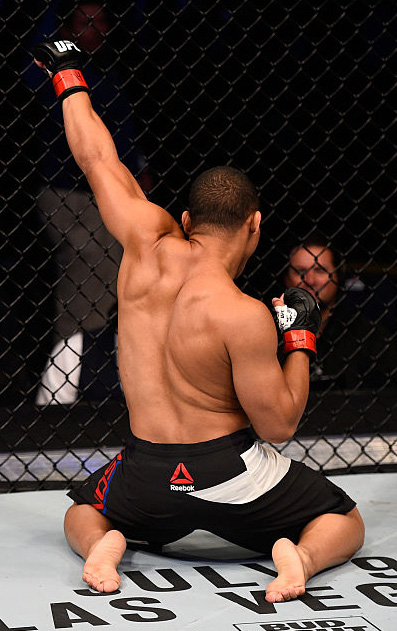 Manny Gamburyan during the UFC Fight Night event on April 16, 2016 in Tampa, FL. (Photo by Jeff Bottari/Zuffa LLC/Zuffa)" align="right" /> “I see him really trying to take me down and if he can’t take me down, he’s going to try to snap up a guillotine, but he’s not going to be able to stay in the pocket or just stand and bang with me,” he added. “Him trading with me would be the worst decision he’s ever made in his entire life because I will force him to make a mistake and jump on it.”

As disappointing as his results against Lineker and Moraes have been, they haven’t dampened Dodson’s spirits or prompted him to alter his goals.

While he’s changing up his offensive approach to be more aggressive, he’s still completely focused on taking on whomever he needs to face, wherever the UFC chooses to send him, as long as it leads to a shot at the bantamweight title and a second meeting with the man he finished to punch his ticket into the fraternity of Ultimate Fighter winners six years ago.

“(Getting a victory this weekend means) I can start looking for a title shot because we already know that I secured the only knockout victory against TJ Dillashaw and I’m looking for another one.

“Everyone else is going to be stepping stones and they’re just going to be the next victims until I get my title. I’m not afraid of anyone and I’m not going to shy away from anyone. If they want me to fight in Brazil, in Guam, in the Philippines, in Antarctica – I’m there.”

That includes facing talented Brazilians on their home turf.