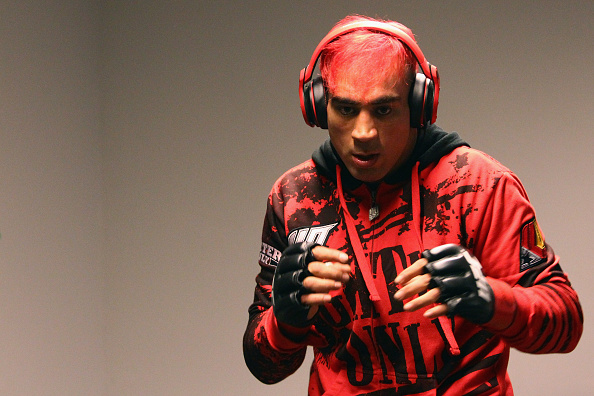 At 30 years old and with a steady day job as a UFC welterweight, Augusto “Dodger” Montano carries few outward remnants of his days as a punk rocker and graffiti artist at home in Mexico City, with the exception of his bright red hair and tattoos. But the rebellious streak born back then has not been tempered, and he believes that as a professional prizefighter, he is carrying on that punk spirit.

“Fighting is the most punk rock thing I can do for work,” Montano said through translator and Bonebreakers teammate Montserrat Alvarez Cienfuegos Tendilla. “It allows me to do what I want to do.”

Having that freedom has been important to Montano, and it’s made him one of Mexico’s most popular – if not the most popular – homegrown MMA heroes. A pro since 2008, he carries himself like boxing’s warriors of the past, with an instinct to entertain and to finish fights. He also has a sense of history, reflected in his selection of boxing great Ruben Olivares as one of his fighting heroes.

“He was humble, he was noble, and he was a rocker,” Montano said of the legendary Hall of Famer. Does he see any of Olivares in himself.

“Definitely, and also when I fight, I try to think of what Ruben would do.”

If Olivares was an MMA fighter, you could probably describe him as a fearless knockout artist, and Montano has done his best to be one over the course of his career, which has seen him finish all 15 of his wins, 11 by knockout. In his most recent bout, Montano debuted in the UFC with a first round TKO of Chris Heatherly, extending his current win streak to six. More importantly, he did it as home in Mexico City, the same place he will compete in this Saturday against Ireland’s Cathal Pendred, a fellow 170-pound prospect he spent quite a bit of time with during a recent media tour.

“He’s a person with character and is very respectful for all his opponents in the cage,” Montano said of Pendred. “We’re going to fight, and I don’t feel anything other than that I’m going to leave everything in the cage.”

That attitude has endeared him to all fans who have encountered him, but particularly at home, where he is a role model for a new generation of fighters.

“I’m okay with it because this is not only about the fighting, but also martial arts and I get to influence young people in a way to let them know about my way of life and all the possibilities that come with this,” he said.

It wasn’t always this way, as Montano once approached fighting as a fairly solitary pursuit, one he didn’t even tell his family about.

“At the beginning I did this for myself and for my friends, but now that I’m a professional, my family supports me and I fight also for my family.”

And for Mexico, the place that he hopes to one day bring a world title to.

“I’m focused on my next fight and then after that, like everyone else, I’m looking for the biggest and best goals in my career.”