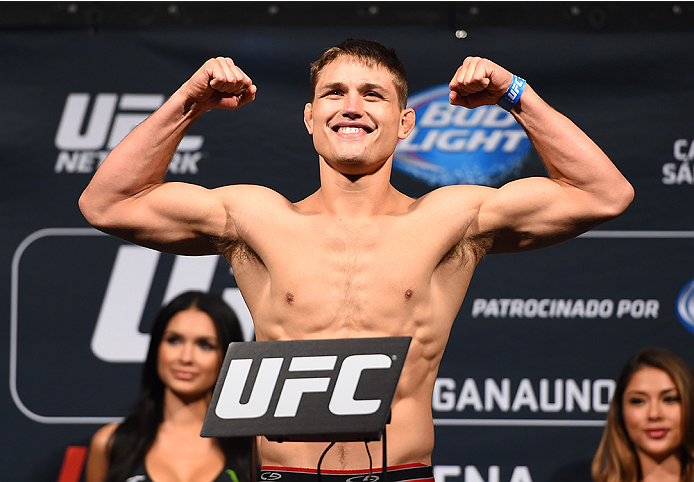 Running errands all day, away from family and friends while sporting a black eye he got during his last sparring session, you would assume Drew Dober has experienced better Christmas holidays than this one. Still, just days before UFC 195, the upbeat lightweight’s trademark smile doesn’t show any signs of a looming weight cut or fists and shins flying towards his face.

“I love Christmas,” Dober admits with a laugh. “I’m all about the trees and the presents and the cookies and everything else. But the lifestyle of a fighter, you’ve got to make sacrifices, so it’s been a little less festive than others.”

Spending the holidays alone on the couch, eating lean chicken and vegetables after repeatedly getting kicked in the face is indeed a sure sign of someone putting his priorities in order.

“It was just another day for me. I wasn’t able to drive home to see the family, because I’ve got to, you know, beat people up and stuff.”

A 27-year-old Thai boxing aficionado, Dober was supposed to do that to Erik Koch this weekend in Las Vegas. Koch, however, withdrew from the fight with an injury and was replaced by Scott Holtzman.

Inside the numbers: See how the Holtzman vs. Dober matchup shapes up

“Hot Sauce” Holtzman will be looking to score his second UFC win after debuting with a submission victory over Anthony Christodoulou last summer. Christmas or not, Koch or not, Dober just plans to make up for lost pleasures by getting his own party started in the Octagon.

“I thought (Koch) was a great fight for me”, he says of the original matchup. “He’s a really tough guy and he made a name for himself. He definitely would’ve stood and traded with me, so it was exciting and a fantastic fight and I thought I would’ve come out with the victory.”

Still, even with less name value in the cage, the bout is likely to add some more fireworks to Vegas’ New Year’s celebrations. Combine Dober’s high volume striking output, never-say-die attitude and Holtzman’s aggressive forward pressure and you’ve got yourself a recipe for some old-school, hard-nosed MMA action.

Since he was expecting that kind of fight from Koch anyway, the new name doesn’t make much of a difference to Dober.

“I got an idea of what Scott is doing, and it didn’t really change the way I’m working on myself. It doesn’t matter to me who the UFC puts in front of me.”

After getting done with business in Vegas, Dober will finally take advantage of the season and “play catchup and celebrate Christmas, New Year’s and a victory” at the same time.

Despite the favorable setting, though, Dober will leave Sin City’s bright lights behind and take the party to Elsdorf, Germany. How he ended up having family in a city of 22,000 people that even most Germans have never heard of is definitely one of the most unique stories in a sport filled with unique stories.

FROM FOES TO FAMILY

After losing a bloody three-round battle to local fighter Nick Hein in Berlin in May of 2014, his former foe invited him to his after-party, where Dober ran across Hein’s sister, Gloria.

“I had a great time with the whole family,” Dober said.

The rest, as they say, is history.

“I talked to Nick’s sister, we exchanged contacts and yeah, she is just a fantastic person. We stayed in contact and then it just happened as it happened. We met in New York and then went to Denver, where I’m living right now, and (last) December, I visited her in Germany.”

Three months later, the couple got married in Las Vegas, and that is how Drew Dober and Nick Hein turned from foes to family.

Once Dober had settled in to his new life as a husband, more fresh blood was added to his other family. A member of Team Elevation in Denver for one-and-a-half years, Dober got to witness the recent, radical evolution of the team firsthand. Among a bunch of spectacular new additions to the team are UFC veterans Matt Brown and Clay Guida, as well as bantamweight champion TJ Dillashaw.

“(There’s) definitely more cameras, definitely more people watching”, Dober laughs about the past few months since the team was reinforced and moved into a newly built, state-of-the-art gym. “It’s always fun to have the people that you see on TV train with you – Matt Brown, TJ Dillashaw and those guys. The room has always been tough, though. Now, it’s just getting tougher, and we have more people competing.”

Among them is Dober, who has come a long way since taking his first amateur Muay Thai fight in Omaha, Nebraska, years ago.

“Moving out here and training with these elite guys is the best decision I’ve made and they’ve definitely been making me better as a fighter and as a person. We have a great group of guys, we consider each other family. I definitely do want to go out there and prove to everyone that Team Elevation is one of the greatest teams in the world.”

The problem for Dober is that all of this year’s personal and professional progress didn’t translate into success for him when the bright lights were switched on above the Octagon.

The lightweight scrapper is winless in two fights in 2015 and will likely be fighting for his job at UFC 195, setting the direction for his 2016 on the second night of the year. While Dober’s New Year’s resolution might be obvious, the foundation to fulfilling it had to be laid in 2015.

NOTHING BORING, NOTHING NORMAL

A year ago, Dober won his first fight in the UFC by submitting Jamie Varner in the first round. A Varner injury, though, left somewhat of an asterisk to the win.

Then, back in March, Dober traveled to Brazil to take on another local fan favorite. While he put on a good fight against BJJ expert Leandro Silva, the referee waved the bout off when it seemed like Dober had been trapped in a guillotine choke. The official turned out to be the only person to have seen a tap from the American, though, which caused a massive fan outcry on social media.

“You’re focusing on your opponent and the fight and how you’re going to win, so when someone else’s hands come in, touching you like that, you’re kind of confused, like ‘Hey, what are you doing, I’m busy over here,’” Dober remembers the scene with a laugh. “And then when he called the fight, I was so confused. I couldn’t get angry, I was just in disbelief, walking around the cage, asking people ‘what happened?’”

That kind of measured reaction to the chaos got Dober a legion of new fans, which admittedly warmed his heart, even if a No Contest as the result of an eight-week training camp is still “thoroughly disappointing.”

Three months later, yet another trip into enemy territory ended without getting a reward for his troubles, as Efrain Escudero caught Dober in a guillotine just 54 seconds into their bout in Mexico City at UFC 188. There was no controversy this time, but just as much disappointment.

Why is that? Why does Dober keep progressing yet come up short on fight night? He doesn’t have a definitive answer to that but, as you’ve come to expect from him, he finds a way to turn the setbacks into a positive.

“Well, I consider myself an entertaining fighter,” he says. “I go out there and I try to perform to the liking of the audience. And, I guess with that being said, all these kinds of situations just go to show you that when I step into the cage, something interesting is going to happen. So, people should definitely tune in and watch, because I don’t have normal or boring fights.”

It’s the upbeat smile and sincere laugh that Dober says that with – in the light of something that would make other people cry out in frustration – that makes you believe that on Saturday night, there’s indeed something special bound to happen inside the MGM Grand Garden Arena.

Whether or not that will turn out to be positive for Dober, he doesn’t know for sure, but if the old year’s struggles have taught him one thing, it’s that the sun will rise again the next morning. And with that in mind, you might as well focus on some positives.

“I’d love to get in the rankings, I’d love to fight as many fights as I can and I want to get that Brazil win back. I’d love to go out there and put on more of a spectacular show and get more Ws and entertain the audiences a lot more.”

And with that, he might have secured himself the blessings of one of this year’s most successful figures, as, according to featherweight champ Conor McGregor, “losers focus on winners,” while “winners focus on winning.”