Doane happy to be "just a fighter" 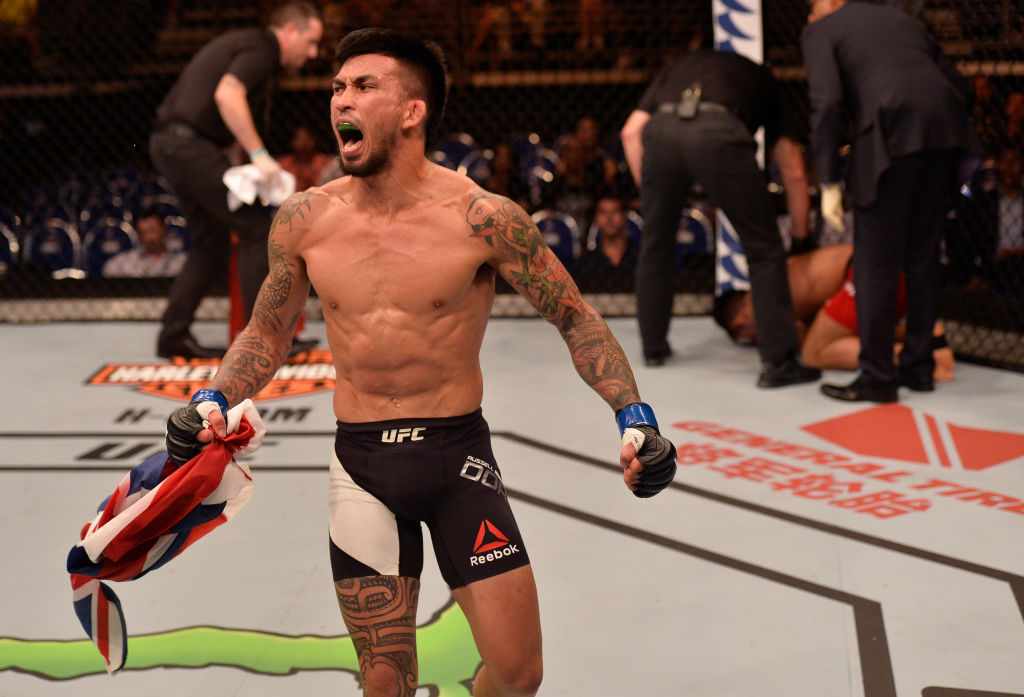 Russell Doane celebrates after his knockout victory over Kwan Ho Kwak of South Korea in their bantamweight bout during the UFC Fight Night event at the Singapore Indoor Stadium on June 17, 2017 in Singapore. (Photo by Brandon Magnus/Zuffa LLC/Zuffa LLC via Getty Images)" align="center" />
To most competitors in the UFC, hearing that he or she is “just a fighter,” would be considered an insult. These days, Russell Doane takes it as a well-earned compliment. But let him explain.

“In Hawaii, we opened a gym and did all kinds of stuff and it got too busy for me,” said the veteran bantamweight, who faces Rani Yahya this Saturday in Orlando. “I ended up being more of a gym manager than a fighter. It wasn’t working out and I couldn’t do both.”

So he packed up his bags and went to California to train with the Team Oyama squad. For a week. Then he got offered the Yahya fight, and the week got a little longer.

“I was already thinking about coming out here to California to train with Team Oyama, but I only really came here to stay for a week, and I got here and they offered me a fight, and I haven’t left. My only issue is, I only packed for a week. I’ve been wearing the same clothes over and over.”

The delivery is deadpan, but then he can’t help but laugh. It’s the kind of humor that could provide the 31-year-old from Honolulu a little side income if this fighting thing doesn’t work out. Just ask him what it’s like to have fellow Hawaiian Louis Smolka by his side for much of this training camp.

“I always say Louis is like the little brother I never wanted,” said Doane. “I love having him with me and I kind of miss him now that he’s gone, but I’m sure that when he comes back and I see him again for a full week, I’ll want to punch him in the nose and tell him to go home.”

Again, deadpan, then laughter. And you can hear the excitement in Doane’s voice that these days, he can focus on his fight and nothing else. I ask him when the last time that happened.
MORE FROM FIGHT NIGHT ORLANDO: Fantasy Cheat Sheet | Three Fighters On the Rise | Smith previews Emmett vs Stephens

“I can’t even remember the last time I just went to the gym and was just a fighter with no extra worries or cares from the outside,” he said. “I had to get away from Hawaii because there were too many other things on my mind other than fighting. Out here, I’m just another guy and I get to live my life that way. I don’t have the worries that I do back home.”

Now the only worry is Yahya, but even that wouldn’t fit the “worry” category for Doane, who wasn’t smiling too much last June as he got ready for his bout against Kwan Ho Kwak in Singapore. After a 2-0 start to his UFC career in 2014, Doane lost four straight. Another loss to Kwak and he was likely going to be looking for a job.

“I don’t know about the pressure of it, but for the first time for that camp, I really didn’t like him,” Doane said of his opponent. “You know us Hawaiians. We’re nice, we’re cool. But for that fight, every thought I had was of me hurting him.”

Doane got the job done, halting Kwak in a little over four minutes. Just like that, the losing streak was over and he could breathe again.

“It saved my career,” he said of the win. “Personally, I wanted it for me, and I deserved that win. I put in a lot of work all this time and with everything else going on, I still couldn’t pull off the wins. But for that one I was able to focus more.”

And this time, focus is no issue, especially with a gang of killers in the gym and a general in Colin Oyama leading the charge.

“If I can be one hundred percent honest, my first week I was here, I was exhausted and I kept up only because I’m tough as nails,” Doane said. “The training was super tough, and Colin is an awesome coach. When he yells at you, you work harder and he lights that extra fire under you. No matter what he says, how he says it, when he says it, when he says something, you’re like, ‘Yeah, I want to kill somebody now.’”

Doane laughs, happy to be “just a fighter” again, and ready to make a statement in 2018 that begins this weekend.