It’s Monday morning. Demetrious Johnson successfully defended his UFC flyweight title for a record 11th time on Saturday night. I am still watching his submission of Ray Borg. If that doesn’t land “Mighty Mouse” on the list of most fantastic finishes in UFC history, what does?

But since we’re on the subject, what does constitute a fantastic finish? First, you have to jump out of your seat when it happens. Next, it has to be one that pops into your head immediately when the topic comes up, making the following list very personal and stream of consciousness. Finally, it has to be something you can watch over and over and over again and never get bored.

Demetrious Johnson-Ray Borg (Watch the replay on UFC FIGHT PASS)
Even though it’s fresh in everyone’s mind, this one won’t grow old anytime soon. Way ahead in his history-making title defense against Ray Borg, Demetrious Johnson could have run out the clock in the fifth round, broke his tie with Anderson Silva and picked up his check. Not DJ. Instead, he went for a finish no one had seen before, as he suplexed Borg and picked up his arm on the way down. Nobody, especially Borg, saw that coming, and he was forced to tap out to the armbar. It was a classic example of the great ones pulling off something amazing at the drop of a hat. 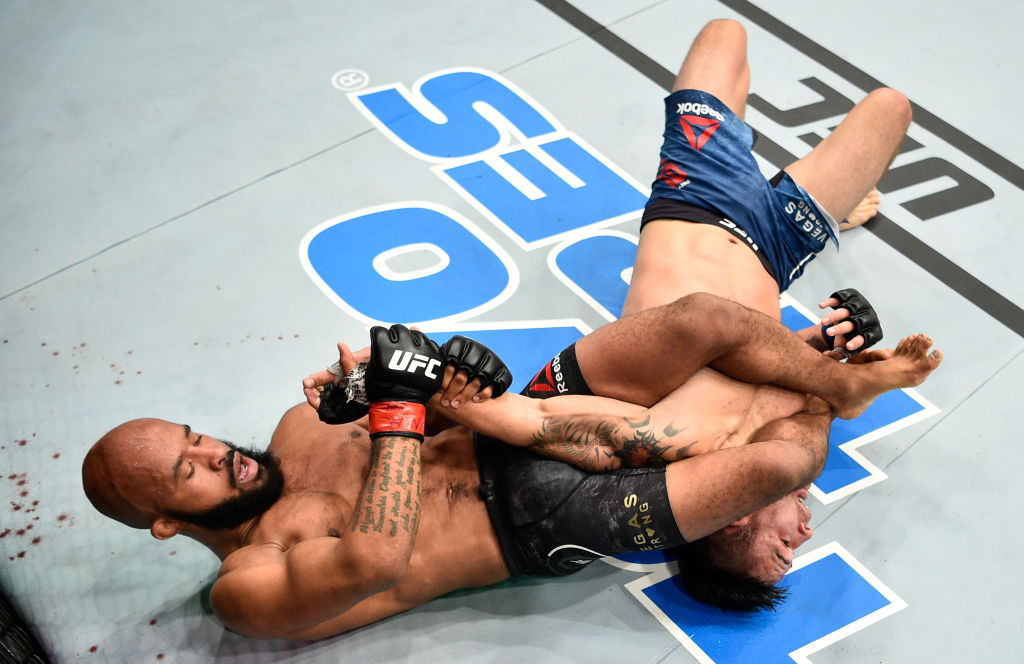 Anderson Silva-Chael Sonnen I (Watch on UFC FIGHT PASS)
Speaking of great ones pulling off something amazing, who will ever forget the first fight between Anderson Silva and Chael Sonnen? Beat up for four rounds, Silva was on the verge of losing his title to his heated rival when the two hit the mat again in the fifth and final frame. But this time, the gutsy Silva found the opening to slap on a submission, and in a turn of events that shocked the fans in attendance, Sonnen tapped and “The Spider” saved his title in one of the great comebacks in MMA history.

Edson Barboza-Terry Etim (Watch on UFC FIGHT PASS)
Every time Edson Barboza throws a kick – whether to the legs, body or head – there is the possibility for a fantastic finish. But none will ever compare to the night in January 2012 when he short-circuited Terry Etim with a wheel kick that ended the fight the moment it landed. Usually, a kick like this lands and the fighter may get knocked out by the impact of hitting the canvas or is stunned enough that a follow-up will get the job done. Etim was out the moment Barboza landed, showing off the Brazilian’s frightening power.

Matt Hughes-Frank Trigg II (Watch on UFC FIGHT PASS)
This fight was so good that it earned a place in the UFC Hall of Fame, and that’s not surprising at all. Stunned and nearly finished by Frank Trigg, longtime UFC welterweight champion Matt Hughes escaped his opponent’s choke attempt, but he didn’t try to wait out the round and get his bearings back. Instead, he picked Trigg up, marched him across the Octagon and slammed him. As the crowd erupted, Hughes’ choke to end the bout was mere window dressing. That was champion-grade stuff right there.

Matt Serra-Georges St-Pierre I (Watch on UFC FIGHT PASS)
It’s still the greatest upset in UFC history, but if anyone watched Matt Serra’s fight with Karo Parisyan, it was clear that Serra had the power to alter anyone’s plans for the evening. Yet the thing was that Georges St-Pierre wasn’t about to be the guy who got caught by Serra, who earned his shot at the welterweight title by winning season four of The Ultimate Fighter. Then again, that’s why they fight the fights, and in less than four minutes, New York’s “Terror” was the new champion after a knockout no one outside of Team Serra saw coming. 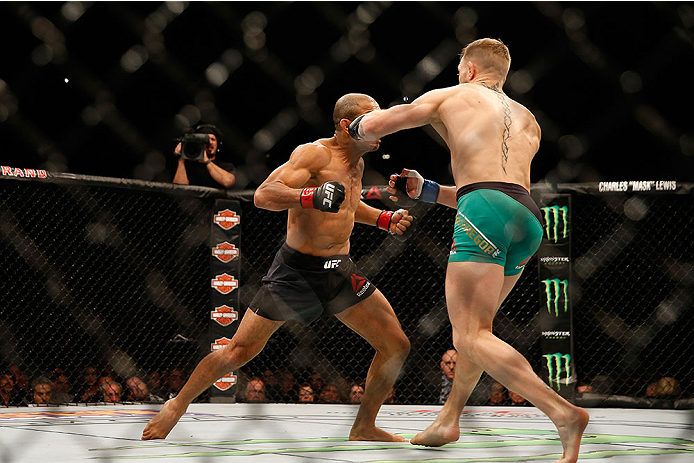 Conor McGregor-Jose Aldo (Watch on UFC FIGHT PASS)
The build-up for the featherweight title bout between Jose Aldo and Conor McGregor took the combatants around the globe and had fight fans champing at the bit to see the Brazilian and the Irishman finally throw hands in the Octagon. On December 12, 2015, they did, but it didn’t last long, as McGregor took the undisputed title in just 13 seconds. I don’t know what it looked and felt like at home, but in the MGM Grand Garden Arena, it was a mix of Mardi Gras, the Fourth of July and New Year’s Eve all wrapped into one as you looked to the people sitting next to you, wondering, “Did I just see what I saw?”

Gabriel Gonzaga-Mirko Cro Cop (Watch on UFC FIGHT PASS)
Mirko Cro Cop made a living out of knocking people out with head kicks, so when Gabriel Gonzaga turned the tables on the former PRIDE star at UFC 70, it was one of those moments where those on press row had to hold the bottom of their chairs to avoid jumping up and yelling after what was one of the sport’s great upsets and knockouts. Again, like most of these finishes, no one saw that Gonzaga head kick coming.

John Makdessi-Kyle Watson (Watch on UFC FIGHT PASS)
This finish by John Makdessi always makes my list of greatest UFC knockouts, and it’s one of the more underrated finishes, though I don’t know why. In front of over 55,000 people in Toronto, Makdessi faked a kick on Kyle Watson, and as Watson’s hands came down, “The Bull” threw a perfect spinning back fist and it was lights out. The funny thing is, as well as I described that, it took several replays in slow motion for me to get it all down. In real-time, it’s hard to pick up how he pulled it off. And that’s from outside the Octagon. Just think how Watson felt.

Scott Smith-Pete Sell (Watch on UFC FIGHT PASS)
The liver shot. I can’t speak from experience, but from what I’ve been told, there is nothing more painful in combat sports. So it was no surprise that after Scott Smith took one from Pete Sell and staggered backward in pain, the end was near. And it was. Just not for Smith, who found the strength for one last punch as Sell charged in and it was the game winner, as a flush right hand put the New Yorker down and out to cap off one of the most bizarre and memorable sequences in UFC history.