Read on for results of the UFC on FOX: Johnson vs. Benavidez 2 main card

Fans of the FOX main card saw two emphatic finishes, as flyweight champion Demetrious Johnson defended his belt with the most emphatic win of his career, knocking out hometown favorite Joseph Benavidez. Plus, Sacramento icon Urijah Faber pulled out one of his best wins yet in the co-main event.

Demetrious Johnson vs. Joseph Benavidez
After getting a split decision win in their first title fight, Johnson left no doubt in the rematching, scoring a clean knockout of the ultra-tough Benavidez in just over two minutes.

The fight started with “Mighty Mouse” dodging and jabbing, Benavidez planted firmly in the center 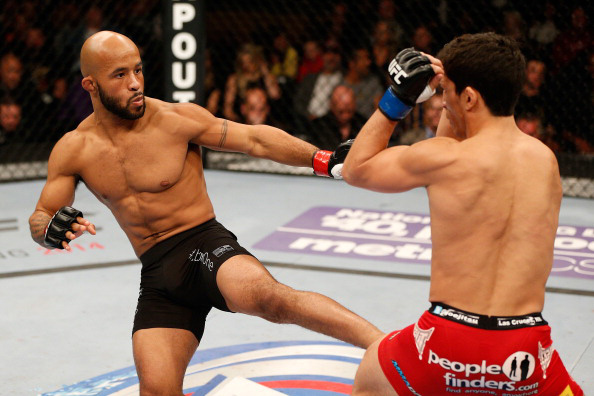 of the Octagon with his hands held in a high guard. Johnson popped in and out, each time being met with punches from Benavidez. Benavidez also scored by cutting off the Octagon and landing kicks as Johnson moved backward.

But once Johnson turned up the pressure and backed up Benavidez, everything changed. A right hand landed perfectly, and Benavidez crumpled, his head bouncing off the canvas. Johnson followed with strikes on the ground before the ref could pull him off, then launche a series of high-vertical spin kicks to celebrate.

The knockout came at 2:08 of the first round – it was Johnson’s first in the UFC/WEC Octagon, and the first time Benavidez, who’d been on a KO streak of his own, had ever been stopped in a fight.
Benavidez moves to 19-4; he missed the reading of the decision because he was still being tended to by doctors and commissioners.

“Tonight was a great moment for my career but in reality it’s just another fight," said the victorious Johnson. "My goal is to keep evolving and displaying my skill set to fans and having them enjoy my fights."

Urijah Faber vs. Michael McDonald
Bantamweight Urijah Faber, the former WEC champion who put Sacramento on the MMA map, put opponent Michael McDonald on the UFC mat, first with two right hands and then finishing with his signature guillotine in the second round.

Faber promptly took the fight to the canvas, getting a single-leg in under 15 seconds. He struggled to advance inside McDonald’s high guard, and eventually Herb Dean stood them up with two minutes left. Faber was spry on his feet, winging big right hands and bounding in and out of range, but nothing from either fighter landed flush. 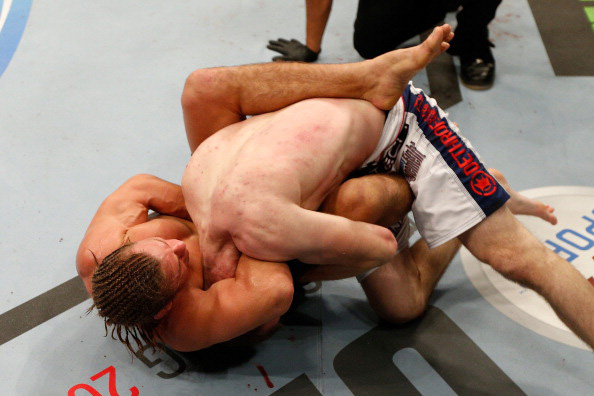 In round two both fighters connected in an exchange but it was McDonald who was hurt, and Faber chased with more strikes and a high kicks. McDonald answered with a right hand and the two kept distance. Though McDonald fired big left hands and uppercuts, they were just too slow to reach Faber, who connected mid-round with another right hand. This one took the 22-year-old off his footing, and Faber swarmed, following with more punches until another one dropped McDonald. Faber then locked in a guillotine and rolled over, forcing McDonald to tap at 3:22.

The win is Faber’s 30th overall (to six losses), and he remains undefeated in non-title bouts. Ranked second in the division (behind only interim champion Renan Barao), the win leaves little doubt that Faber belongs in the contender spot once the bantamweight belt is unified in February. McDonald, who was ranked third, moves to 16-3.

The tapout win was Faber's 11th, and the Team Alpha Male founder now holds the most wins by submission in modern UFC/WEC history. “There is a real sense of community here in Sacramento,” he said. "We have a lot to cheer about and I'm glad I get to play a role in that.

Chad Mendes vs. Nik Lentz
Eighth-ranked featherweight Nik Lentz volunteered for the unenviable task of fighting top contender Chad Mendes in Mendes’ hometown at UFC on FOX. And while he couldn’t quite pull off the upset – Mendes won a unanimous decision -- he did give Mendes his first challenge in several fights, going toe-to-toe with the streaking knockout artist, who looked flat as the fight went on.

A left hand in the first minute wobbled Lentz and Mendes followed with big rights, but Lentz rallied back and threw enough punches to make distance. Mendes alternated strikes with hard leg kicks, and though Lentz came forward with jabs of his own, Mendes easily evaded them or walked through them. His strikes looked to have more power, and his three big takedowns also 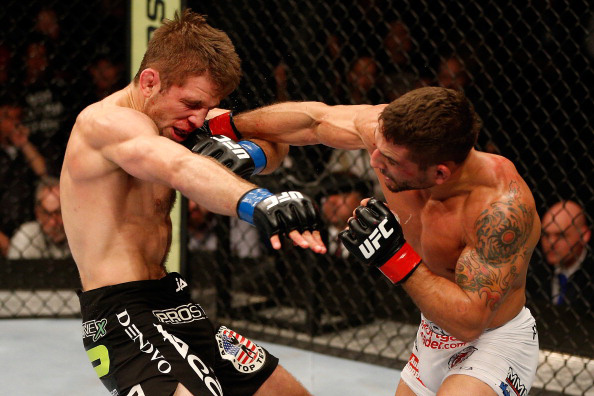 Lentz played the standup game in round two, getting in a right in an exchange and leading with the left. Mendes seemed content to make Lentz work, whipping off the occasional leg kick while looking for the big counter. Eventually he settled for takedowns, which he got with 2:30, 2 minute and 30 seconds left in the round, though all he managed to get through from top position was one elbow.

Lentz was unfazed and continued to chip away at Mendes, lobbing kicks and wobbling him once in the third. Mendes got another takedown but was reversed. With a little over a minute left, Mendes exploded with a flying knee, pushing Lentz’ head down and pouncing on a guillotine when it missed. The crafty Lentz survived, but ended the round on the receiving end of Mendes’ acrobatic submission attempts.

Joe Lauzon vs. Mac Danzig
Lightweight Joe Lauzon (23-10) didn’t get the submission he was looking for against fellow TUF alum Mac Danzig (22-12-1), but he did outgrapple him and ground-and-pound his way to a unanimous win.

After some early boxing, Lauzon closed the distance and threw Danzig to the mat. He quickly passed to mount, grabbed an arm and pulled the armbar, but Danzig rolled and wound up on top. Lauzon again threw up an armbar from guard, and Danzig used the ensuing omoplata to stand. Danzig then exploded with a flurry of punches to Lauzon’s body, which Lauzon defended by tying things up. After a prolonged struggle for position against the fence, Lauzon got another trip

A clinch struggle took up much of the Octagon in round two, with Danzig aiming to throw short elbows and Lauzon trying for trips until the crowd’s impatience inspired them to separate. Lauzon held down the center of the mat and Danzig put together some solid strike-kick 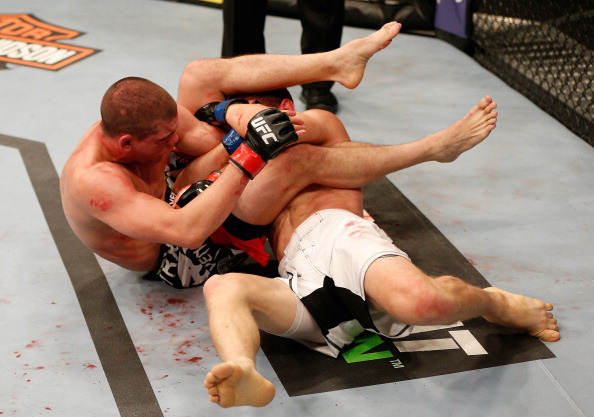 combinations, but Lauzon answered with knees and got things back to the mat. An elbow from above opened up a cut on Danzig’s face, and Lauzon patiently passed to a perpendicular half-guard to throw more. He passed to mount by the end of the round, but didn’t have enough time to complete the armbar.

Danzig threw flurries to Lauzon’s body, peppering them with kicks, but Lauzon kept coming forward and got another trip. This timehe got sidecontrol and trapped Danzig’s near arm with his legs as he ground-and-pounded until passing to mount and dropping repeated brutal elbows. He passed into S-mount and softened Danzig’s body with punches and elbows before again going for an armbar. Danzig wound up on top and tried to retaliate, but he was quickly reversed and again pinned in side control.

Scores for Lauzon were 30-27 across the board, with the win halting a two-fight skid. “You're only as good as your last fight and my last fight was terrible," he said. "It was completely embarrasing, so to get this win was fantastic. I thought I had him finished in the first round. I sunk a pretty nasty armbar and felt his shoulder pop, but he is super tough and was able to get out of it."