"I was doing well and I was winning my fights with the same training and the same methods, but it was just a matter of time until somebody with a good team deconstructed everything I was doing wrong." - Miguel Torres 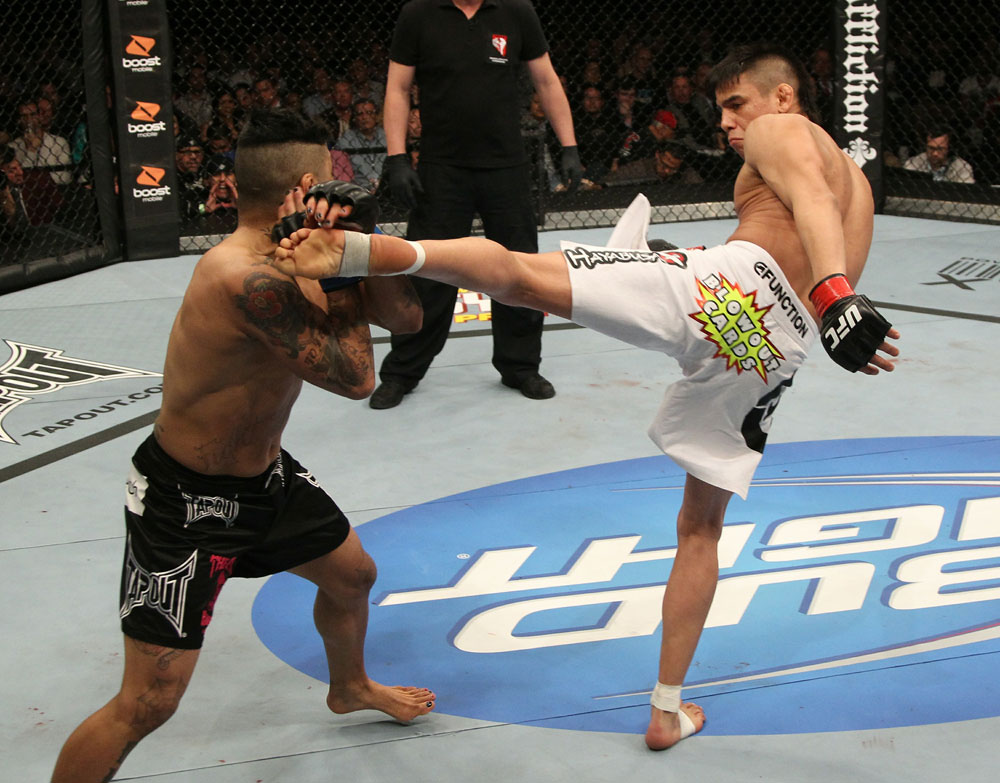 Miguel Angel Torres (38-3) is looking forward to his second UFC fight on Memorial Day weekend at the end of this month, but don’t think for one second that the former WEC bantamweight champion is nervous about fighting in the big show.

“Whether I’m fighting in the UFC, the WEC or my first fight in my hometown, I never feel any pressure from any fight,” says Torres, who is coming into UFC 130 against a very tough Demetrious “Mighty Mouse” Johnson (13-1) as a different fighter, and a different man than fans have come to know over a decade fighting the best his division’s had to offer.

“I’m training now up at Tristar with Firas Zihabi,” Torres says of his fairly new alliance in Montreal, home of UFC welterweight champion Georges St-Pierre. “You saw in my last fight I was getting booed a lot for not going in and chasing Antonio. The old Miguel Torres would have rushed in and made it a crazy fight. But now that I’m training under great trainers and great partners in the gym, I’m more relaxed and I stick to the game plan. Whether it pleases the fans or not, the biggest adjustment I’ve made is knowing what I need to do to win. I’m no longer going to let my emotions get the better of me and I’m not rushing out and getting caught in any more gunfights.”

But a gunfight is just what he might have in store for him. Johnson is riding a three fight win streak with a submission victory over Damacio Page and a unanimous decision against Norifumi “Kid” Yamamoto at UFC 126 among his recent conquests.

“Demetrious is one of those guys who doesn’t have a lot of fights, but he’s very, very quick,” he said. “I’d say he’s one of the quickest guys I’ve ever fought. He’s a very good wrestler with very good takedowns, and his footwork is very good, so his striking is going to be all over the place. It’s like fighting another version of (bantamweight contender) Joseph Benavidez. He poses a lot of threats but I have a very good game plan and I’ve been training really hard for this fight. I’m very confident in my approach to this situation.”

Torres says his approach will not only prolong his career, but it’s also helped him change his life in more positive ways than just winning fights. In fact, he credits back to back losses to Brian Bowles and Benavidez for helping him realize that he had grown too comfortable at the top of the bantamweight mountain.

“It was a matter of time,” says Miguel. “Whether it was them or somebody else, it was just a matter of time before I got caught up in my little world. I was doing well and I was winning my fights with the same training and the same methods, but it was just a matter of time until somebody with a good team deconstructed everything I was doing wrong. Those guys both did that and all that did was force me to go to a better team and step my game up. I think the sign of a true champion and a true fighter is to learn from those kinds of fights and go back to the drawing board and fix what you did wrong and make yourself better. And until those losses happened I wasn’t going to do that. It took that to change not just to be a better fighter but also a better person. So I think those losses made me stronger. Now I’m training with a great team and a very inspiring coach whom I respect very much out here in Montreal, not to mention the guys I train with back home, and I’m learning new things. I was doing well with the same game for ten years, now a day doesn’t go by when I don’t learn something new. My ground game is more dangerous, my striking is 100 percent more dangerous, I had no wrestling before now, and I have good wrestling now, but most of all, I’m a much smarter fighter.”

He’s also a much taller fighter than his next opponent. In fact, at 5-9, he’s one of the taller bantamweights around. Johnson is just 5-3, and Torres will have a significant reach advantage, something that proved effective in his unanimous decision victory against Banuelos. And while not looking past Johnson at all, Torres says he’s happy about all of the former 155 pounders who are now cutting weight to try their luck in the lower divisions that he helped pioneer.