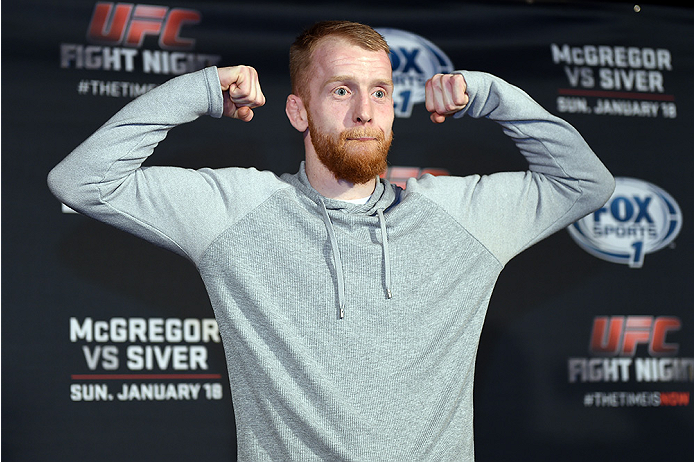 The gathered media wait outside the 3 Arena after a hectic night of editing due to the cancellation of Saturday night’s headline bout.

After the initial shock of the UFC’s statement on the discovery of Joseph Duffy’s mild concussion, the various writers, broadcasters, photographers and videographers agree unanimously that the promotion’s withdrawal of the Irish lightweight is the right thing to do.

The extra couple of hours they have spent manipulating their previews to coincide with the new, modified card might not have been ideal, but ultimately the safety of the fighters is paramount for everyone who is attached to the sport.

Separated into three different groups to meet the media for their scrums, it is very clear from the jump that many are still trying to fully get their heads around Duffy’s withdrawal. As the Donegal man’s Tristar teammate and roommate from the team dorms, Tom Breese, enters the room for his interviews, he reminds everyone of how much Saturday night would have meant to his good friend. This time around, it was supposed to be Duffy’s event.

“He’s gutted,” Breese speaks into the multiple microphones, cameras and Dictaphones that are pointed in his direction. “He didn’t pull out of the fight, obviously the UFC pulled him out of the fight. He’s gutted. This was his event, he was the main event. I see a lot of people kicking the man while he’s down and I don’t like that.”

One man’s famine is another man’s feast, and as soon as Aisling Daly enters the room for her own obligations you can’t help but notice how much her mood contrasts to Breese’s. ‘The Bash” appears to be in the best shape of her life ahead of her first outing as a UFC fighter in front of her hometown crowd. She is calmness personified and she wears a big smile on her face, not only because of her confidence in her preparation but also due to the late promotion of one of her best friends, Paddy Holohan.

The Irish flyweight bounces into his scrum and as the new main attraction for the Dublin card, the majority of the attention is shifted towards him. Within five seconds of him sitting down, he already has the room laughing.

“Paddy, can you look over here for a picture? Can you point at that sign with your name on it?” he is asked the second he arrives at his allotted area.

“Do you have somewhere to be? You must be in a rush, are you?” Holohan fires back as a mischievous grin stretches across his face.

Beside him, his opponent Louis Smolka is in similarly high spirits. For both men, the card was supposed to mark their first outing on a UFC main card. Over just a couple of days, the flyweight duo has been promoted twice, first to co-main event status and finally, to the headline bout. It has no doubt been an emotional time for both men.

As the media file their interviews, commentator John Gooden enters the room they work in. Typically well dressed, the Englishman is preparing to leave for Murray’s Bar where he is set to host a quiz night. It isn’t long before the topic of Duffy is raised.

“There was no way that Joe didn’t come here to fight, guys,” he says. “I saw him just a couple of days ago and he was counting out how many almonds he was going to eat.”

Having processing Joe Duffy’s exit out of their systems, all attention now shifts towards today and the event’s weigh-ins – the first time we will hear the Irish roars since their historic showing last year.