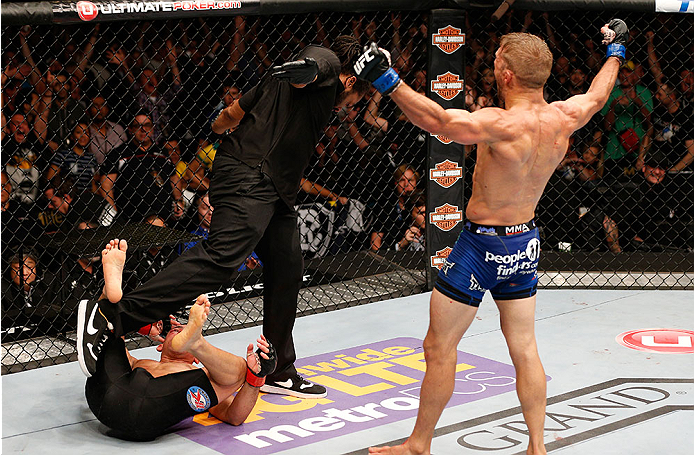 The new official UFC rankings were released on Monday and, as expected, TJ Dillashaw's huge upset win over Renan Barao made a huge impact. The new UFC bantamweight champion has moved into the No. 11 slot on the overall pound-for-pound rankings, while Barao dropped from the No. 3 spot all the way to No. 8.

Another notable jump in the p-4-p rankings has UFC lightweight champion Anthony Pettis moving up two spots to No. 6 behind the top five of Jon Jones, Jose Aldo, Cain Velasquez, Demetrious Johnson and Chris Weidman.

Daniel Cormier's dominant performance over Dan Henderson earned the former Olympic wrestler a two-spot jump into the No. 2 light heavyweight slot behind Jones and Alexander Gustafsson, who are in negotiations to meet again on Aug. 30 for the belt. Cormier is in line for the next shot and may or may not wait it out for the winner.

Cormier's move pushed Rashad Evans and Glover Teixeira down a spot to No. 3 and No. 4, respectively.

In the welterweight division, Matt Brown and Hector Lombard both moved up a space past Jake Ellenberger into the No. 5 and No. 6 spots, respectively. Ellenberger now sits at No. 7 after his TKO loss to No. 1 Robbie Lawler at UFC 173.

In an interesting development, Vitor Belfort passes Lyoto Machida into the No. 3 spot on the middleweight list, which is interesting considering Machida is next in line as the No. 1 contender to Weidman's title. Those two meet in the main event of UFC 175.

In the bantamweight division, Dillashaw obviously moves into the title spot, with Barao at No. 1, Urijah Faber now at No. 2, Raphael Assuncaso at No. 3 and Michael McDonald at No. 4.