Renan Barao is training like never before.
He is starved for redemption; desperate to regain the UFC bantamweight title.
T.J. Dillashaw, the man who took the title and is set to battle Barao again in the rematch this Saturday night at UFC 177, said nothing Barao does will help him rewrite history.

Ahead of the much-anticipated rematch at UFC 177, Dillashaw took some time on Tuesday to visit Oakland Raiders headquarters to watch practice and meet some of the players. After the meet and greet, Dillashaw spoke to UFC.com to talk about the upcoming fight and what life has been like since winning the belt in one of the biggest upsets in UFC history.
Dillashaw grew up a Raiders fan. In fact, his whole family bleeds silver and black. He grew up playing football in Pop Warner and even a little in high school before hanging up his cleats to focus on wrestling. 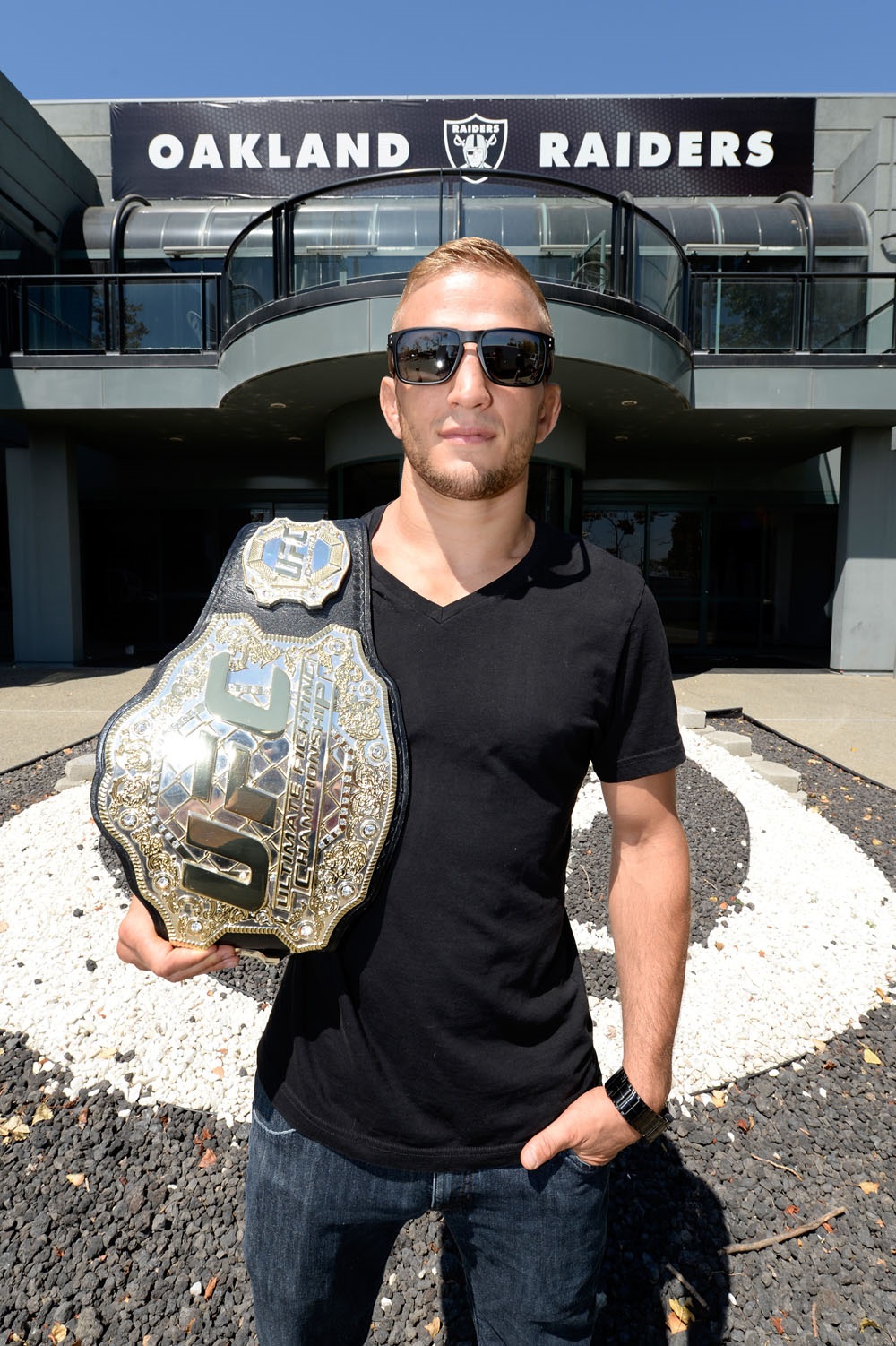 Lining up at running back, cornerback, and linebacker, which he admits was his favorite position, Dillashaw said it was a dream come true to meet the players he’s been watching the past few years.
“I’ve been a Raiders fan my whole life,” he said. “It was cool to come meet some of the guys, take some photos, and take in practice a bit. … It’s pretty cool for me to show up and the players were excited to see the belt.”
It’s fitting that T.J. visited the Raiders, a team that has one of the most feared fan bases in the league. This Saturday night he’ll face one of the most feared fighters inside the Octagon.
Dillashaw knows just how dominant “The Baron” can be on fight night.
“It’s going to be a tough fight, and I expect him to bring everything to the table,” Dillashaw said. “He’s a scary fighter and he can finish the fight at any time, but I’m ready for that. I’m ready for what he’s got.”

> Watch: UFC 177 Embedded: Vlog Seres - Episode 1
Thinking back to the first fight, Dillashaw is still impressed with his handiwork.
He always envisioned beating Barao, and even predicted the way he’d do it, but he never imaged it would be so seamless. That he would outperform Barao in every aspect of the fight.
“No fights go as perfectly as you game plan, but this one did. The fight was like slow motion and everything was just so smooth,” Dillashaw said.  “You see those epic fights on TV and you always talk about them. It’s cool to be in one of those fights. Even when I go back and still watch it today, I’m even impressed myself.”
If you've followed the Dillashaw story since UFC 173, you know how instrumental his coach, Duane “Bang” Ludwig, has been in his development as a fighter.
When Ludwig joined Team Alpha Male he brought with him his own fighting experience and an attention to detail that Dillashaw explained to be second to none.
Dillashaw is a better fighter because of Ludwig.
“It’s just the attention to detail. He’s a big technician and he studies a lot of tape - he picks me apart a lot, and he brings awesome combos to the table,” Dillashaw said. “He’s gotten me to start fighting out of both stances, cutting off certain angles and setting up a lot of my takedowns and kicks a lot better.”

Outside of his in-cage technique, Dillashaw said that he likes fighting under the bright lights, being the center of attention. 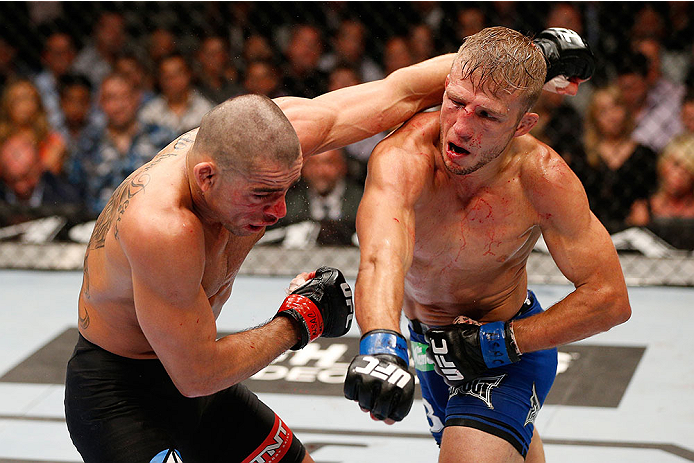 At UFC 173, he remembers coming out to a chorus of boos in a heavily pro-Barao crowd at MGM Grand in Las Vegas. But things quickly changed as he started to take over the fight.
“The fight started out in Vegas, and the first thing I started hearing were the chants from the Brazilians, ‘Uh vai morrer’ – that I’m going to die,” Dillashaw said. “As soon as I landed the big punch the fans started swinging over my way. It was fun to hear the crowd get louder and louder, and I think I perform better and better because of it."
He expects to have the fans in his corner from the start Saturday when he fights in his hometown of Sacramento.
“It’s going to be wild. It’s going to be really loud, really fun and I think I’ll feed off the crowd,” he said. “I think I do better under the big spotlight, when I have all the attention of the people. It’s going to be really nice having them all cheering for me."
As far as repeating his performance from UFC 173, Dillashaw said he doesn't even know if that is possible. He just knows he can beat Barao again, and he plans to prove it.
“I’m not so much excited about having another great performance, because I don’t want to put the pressure on having to top the performance from the first fight. I don’t even know if that could be done,” he said. “I’m just excited about winning again, holding onto the belt, and putting my name on the list of the pound-for-pound best fighters in the world."