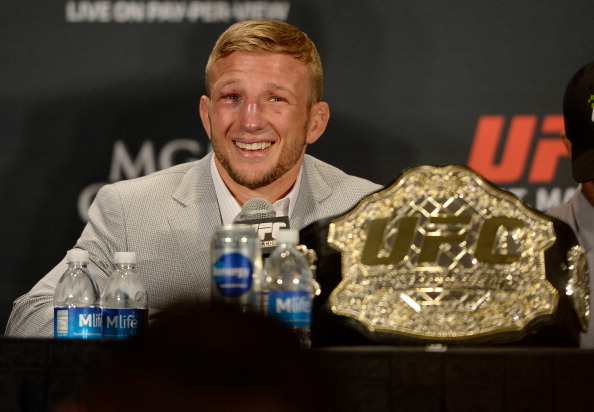 As he gets ready for the training camp that will precede the biggest fight of his career, UFC bantamweight champion TJ Dillashaw is prepared for the one big adjustment he’ll have to make going from Sacramento to Colorado.

He’ll be required to wear a shirt.

“That’s going to be the toughest part, I guess,” Dillashaw laughs as he prepares to trade sunny California for soon to be snowy Colorado.

All kidding aside though, Dillashaw’s decision to move and train full-time for his January 17 showdown with former champ Dominick Cruz is a major one in his career, but not one that he is coming to lightly, especially after years with his Team Alpha Male squad in northern California.

“I was offered this opportunity about a month, a month and a half ago,” he said. “I told them (Team Alpha Male), ‘look, it’s a real tough situation for me, and I don’t want to leave my team and I want to figure some things out.’ So I’ve been talking about it, but I just finally made the decision yesterday, so it’s kind of crazy how fast news is spreading. But things are good, I’ve got a lot of support from the guys and they know my situation. There’s no hard feelings whatsoever and I plan on continuing to be part of the family even though I’ll be doing my camp out in Colorado. All those guys are dear to my heart, and I’m going to continue to spend time with them and all that, but my training camps will be in Colorado.”

Dillashaw, 29, is no stranger to working in the state, as he has a close bond with former Team Alpha Male coach Duane “Bang” Ludwig, and has traveled to Colorado to work with Ludwig as well as several renowned coaches and teams in the area during those trips.

But now Team Elevation is about to get a lot bigger.

“I told them (in Colorado) that I was going to be coming out for my next fight and do the exact same thing – go back and forth,” Dillashaw said. “The head coach, Leister Bowling, said ‘you need to do whatever’s best for yourself, figure out what’s the best training, and take advantage of it. But I just want to let you know that we are starting a team and we’re going to have all the coaches that you’ve been working out with under one roof, and it’s going to be an ideal situation in a state of the art gym.’”

Dillashaw, fresh from a Performance of the Night stoppage of Renan Barao in their July rematch that marked his second successful title defense, decided it was time to stay in one place for his entire camp, and Colorado is that place.

It’s a fresh start of sorts for the champ, and he’s happy to get started. Well, except for that wearing a shirt thing.