Dillashaw: I'm Going To Run Through Him

Hear What The Bantamweight Champ Had To Say Ahead Of UFC Brooklyn
By Gavin Porter and Steve Latrell • Jan. 17, 2019

From the moment Henry Cejudo dethroned longtime UFC flyweight king Demetrious Johnson at UFC 227, he’s had his sights set on fighting the bantamweight champion. He called out the winner of the bantamweight title fight, which would take place moments later, in his Octagon interview. TJ Dillashaw would go on to defend his belt, slamming shut the door on his rivalry with Cody Garbrandt.

And with Johnson out of the picture, a new door opened.

While initially the idea was for Cejudo to move up to 135lbs and take on Dillashaw, it was Dillashaw who made the ultimate decision to take on Cejudo for the flyweight strap. And just like that, for the first time ever, the UFC bantamweight champion and flyweight champion were set to collide.

We caught up with Dillashaw to discuss his weight, what he thinks about Cejudo, his quest to be the greatest of all-time and much more. 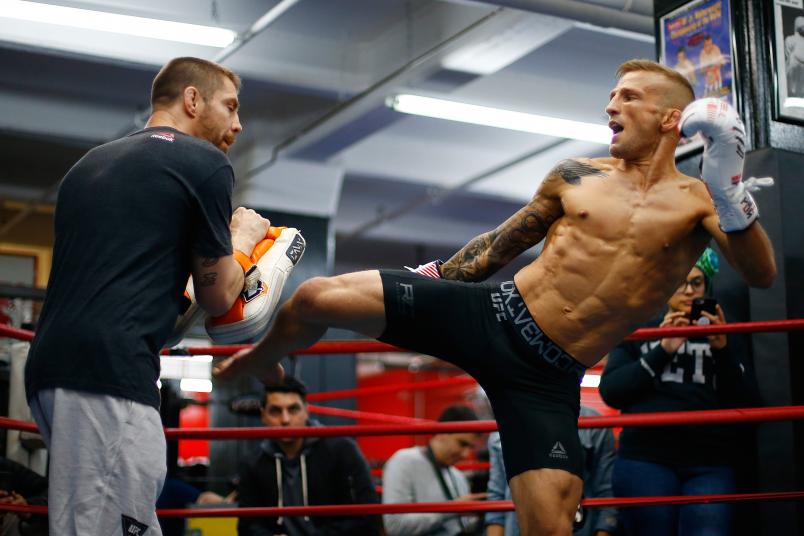 UFC: Hey champ thanks for chatting with us. What's the over/under on the number of times someone asks you about your weight cut?

TJ: That's definitely the first and most asked question this week for sure. I feel great. I'm in great spirits. Close to weight. Ready to take over.

UFC: We’ve had some other double champs in the past, but you’ll be the first one to go down and get a second. Can you tell us about that?

TJ: Yeah most people start where I'm at right. When I got in the UFC, if there was a 125lb division that's probably where I would have started. You know, I'm not like a big… I can be a big 135lb pounder. But I had to do a lot of work to get there. I actually do just as much work to be a big 135lb pounder that I do to be small or to get to 25's. You know, I've taken it over the years to put the weight on. So it's just been a twelve week, serious job to bring my weight down the way it should be to do this weight cut.

UFC: And is there anything special you had to do conditioning wise so you didn't lose your power and speed?

TJ: I mean so it's crazy to say but I actually put up my strength personal records, my PRs, on Saturday before I came out here in New York. So I'm stronger than I was my last camp and I'm lighter. So my strength and my power output is insane. Your power is your weight to strength ratio and it's through the roof so I'm definitely feeling great.

UFC: You and Henry were both on UFC 227. Did you two send each other any sideways glances or cross paths at all?

TJ: Oh Cejudo, oh he called me out. Yeah I mean that's when the whole thing started is when he called me out to fight me. I was like I'm coming to 135's. I want the 135 pounder. I said “cool bring it.” And then he didn't. He was too scared to come to 35’s you know. So I'm the one who's dropping down and taking the belt, worked out perfect for me I'm actually glad that I get a chance to do this.

UFC: What does that say to you that he wasn’t willing to come up to 135lbs. Does that give you an advantage heading into this fight?

TJ: 100 percent. He's too scared to fight me. That’s why he’s saying he doesn't want me to make weight. He's like "oh if he misses weight" this and that. They're praying I don't make weight because they know I'm going to run through him.

UFC: Do you see any specific advantages in this fight? I know you said in the last Cody fight you wish you could show your ground game more. Are you excited for that opportunity in this one?

TJ: Yeah we'll see if it gets there right. I've been saying that for a while and doing a lot of jiu jitsu with Philipe Della Monica and Gracie Barra and I've been waiting to kind of show it off. I've been working my butt off at it, but obviously going to finish the fight. When it comes because my bang muay thai it's hard to get through you know, so with that with that deadly combo I'm going to finish the fight. I just don't know where yet.

UFC: Obviously Henry has a great background in Olympics and everything, would beating an Olympic champion mean something special to you as well?

UFC: You're sharing a card with Cowboy Cerrone who is a new dad. So after his last fight he said he finally knew what he was fighting for. Can you relate to that sentiment?

TJ: You know I've always been fighting to be the best. For me, I guess you say that I make money now and I know why I'm making money. And why I've been saving up and hoarding my money and saving it for later because I want my family to have a good life. But my fighting has never changed. That's always been something in me that I've always wanted to be the best and I’ve always wanted to leave this sport the greatest of all time. I've never needed extra motivation.

UFC: You’ve talked about your legacy. Obviously the greatest of all time or something you want. Where did this get you on that track?

TJ: It's a stepping stone. I'm breaking records. I want to be the first one ever to get three belts. To be known as the greatest of all time you got to have some special things done, right? And I'm in the place to do that.

Watch Cejudo and Dillashaw go to war for the flyweight title live on ESPN+, January 19th at 10pm/7pm ETPT. Here’s how you can watch the UFC on ESPN+.

Gavin Porter and Steve Latrell are writers and digital producers for UFC.com, follow them on Twitter at @PorterUFCNews and @TheUFSteve.