Dillashaw back where he belongs - with the belt 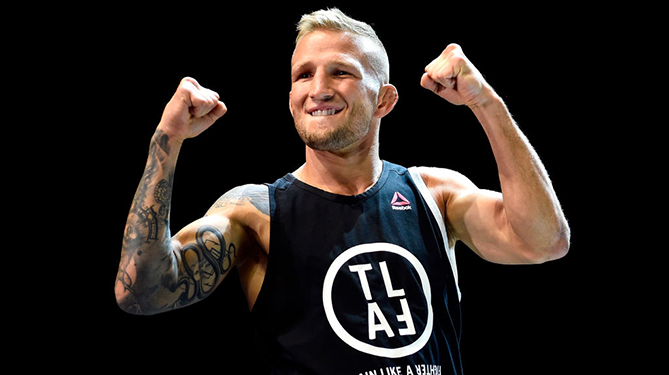 In any sport, there’s an apparent need for endless analysis and breakdowns of what happened on a particular night on the field, the court or in the Octagon. TJ Dillashaw is no different when it comes to his take on his first fight with Cody Garbrandt.

“The first time I fought Cody Garbrandt, I knocked his ass out,” Dillashaw smiles. “It’s simple.”

In the mind of the UFC bantamweight champion, there’s nothing deeper than that to reveal to the world about the night he took his title back from his former teammate at Madison Square Garden.

“Nothing surprised me about the first fight,” Dillashaw said. “I know the holes that the guy had and they were there. That’s the thing about having a Fight IQ – you’re gonna see those openings and take advantage of them.”

TJ DILLASHAW HAS DONE IT!

Few have doubted Dillashaw’s Fight IQ, at least not since he delivered a flawless fifth-round knockout of the seemingly unstoppable Renan Barao in a 2014 bout that put the 135-pound title belt around his waist the first time. At that moment, Dillashaw’s win was talked about as one of the greatest upsets in UFC history. In hindsight, the win doesn’t seem so far-fetched anymore.

Some believe he shouldn’t have even lost the belt to Dominick Cruz in January 2016, chief among them being the Angels Camp, California native.

“Losing my belt was a bitter thing for me,” Dillashaw admits. “I lost it in a split decision I didn’t agree with and I wanted a rematch. I was very vocal about that. But I went through and made sure to fight the top guys. If I wasn’t fighting Dominick, I wanted the number one ranked fighter because I wanted my belt back and I knew that was the way to get there.”

The way he saw it, every fight following the loss to Cruz wasn’t just another payday, but a title defense.

“I treated it as if I still had the belt and I was defending it against the number one contenders,” he said. “It was Raphael Assuncao, it was John Lineker. These guys were at the top of the weight class and it got me back to where I knew I was. I told everyone I was the world champ, I beat the top guys, and I’m still world champ. I got my belt back. I’m back to where I belong.”

He had to go through a long process to get to MSG last November, though. There was six weeks coaching against Garbrandt on The Ultimate Fighter, seemingly endless interviews, faceoffs and trash talk, but finally, the two met in the Octagon, and early on, it looked like Dillashaw was going to head back home to Colorado without having to check an extra bag.

“Cody definitely hit me on the button in the first round,” said Dillashaw, who got rocked late in the opening stanza but made it to the end of the round. “I came forward hard, ran into his hardest punch, but that’s fighting. You’ve gotta roll with the punches.”

Round two was a different story, though, and at 2:41 of that frame, Garbrandt was stopped and Dillashaw was on top again. Officially.

“Even though I won my belt back at UFC 217, I still felt like it was me defending it,” he said “I still acted as if I was champion.”

Yet while he’ll look at Saturday’s UFC 227 main event as his seventh title defense, it’s only the first of his second reign. But those are just details, and the one the 32-year-old champion is focusing on is putting an end to this rivalry once and for all.

“Nothing’s changed other than he’s a lot quieter this time,” Dillashaw said. “Once you knock them out, they can’t be as confident and talk as much. But beating Cody in this rematch means I continue my legacy, to strive to be the best pound-for-pound fighter in the world. I will push harder, I’m the smarter fighter and the better fighter.”

And a fighter who can’t stop smiling.

“Now that I got my belt back, you’ve always got to set new goals, and the goal is to be the pound-for-pound champ or just to win my fights and be exciting and to go out there and put a show on for everyone,” he said. “I’m in this for the sport, I’m in this for the love of martial arts, but I’m also in this to be entertaining, to go out there and have a smile on my face when I walk out and feed off the crowd and just enjoy it.”