Outside the Octagon is a weekly column from UFC.com editorial director
Thomas Gerbasi, who has covered the sport since 2000 and has authored
the official UFC encyclopedia. 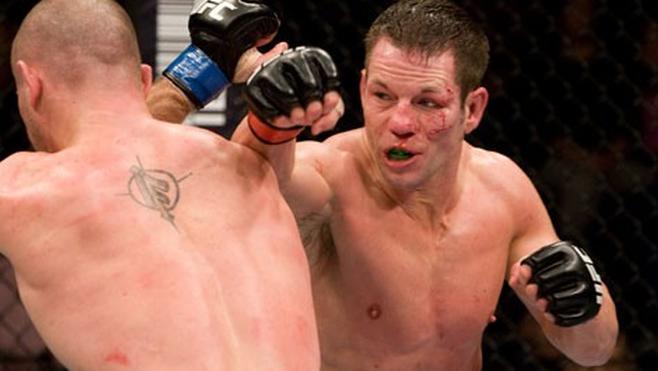 Marcus Davis was never one to mince words as a professional fighter, and at 40, six months removed from his final MMA fight, he’s not about to start now. That means when you ask “The Irish Hand Grenade” about the UFC’s first event in his home state of Maine this Saturday, he admits that “It’s bittersweet, absolutely.”

‘Bitter’ because he will be in the corner of middleweight Tim Boetsch as a coach and not as a fighter, ‘sweet’ because this is something he’s wanted for his state ever since he put on four-ounce gloves for the first time.

Getting Maine to legalize the sport may have been the toughest fight he’s been involved in, but it’s one that ended up with a win in 2009.

“It was a huge victory,” Davis said. “And then I was the first person to ever promote an MMA event here in Maine. After that, I watched it grow and grow and grow, and then to hear that the biggest show in the world is coming, it’s a great accomplishment to have that in Maine in such a short amount of time.”

Funny how things change as you get older. When you’re young and coming up in the world, all you want to do is leave your hometown. But when you’re established and have seen that world, there’s nothing more comforting than being home and embracing what it represents.

Davis, a Houlton native, never left for too long, but when he began boxing as a child, the goals weren’t riches, fame, or world titles.

“This is all I’ve ever seen as a kid, so my big thing was to be able to get out of Maine and travel,” he said. “I had two dreams, and I completed them. I came from nothing really and didn’t have a lot as a kid, so I didn’t think of myself ever becoming some big, famous millionaire or something like that. My dream was to become a professional fighter. I was able to complete that by age 18, and then the next dream was to be able to fight in Ireland, and I’ve done that several times now. I wanted to be able to travel and do what basically I was born to do, and that was fight.”

He doesn’t pause before the next sentence, perhaps not ready to give time to a career that saw him fight 20 times as a pro boxer, 34 times in MMA, and a handful of times as a kickboxer. Instead, he continues, saying “Now, that’s not who I am. I transitioned from being a fighter to being the coach and the mentor. I still found a life after fighting, and I enjoy it.”

He means it too, because you wouldn’t expect anything else but truth to come out of Davis’ mouth. When you’ve walked into a ring or Octagon with nothing but your gloves, trunks, and a mouthpiece, you save your lying for the time between the bells, when you have to tell yourself that you’re not tired, that the punch you took didn’t rattle you, and that the blood flowing isn’t that bad. And after you’ve done that, nothing else is really worth lying about anyway. So while you can hear the slightest hint of desire in Davis’ voice when he talks about the fight game, he knows that he’s done with that part of his life.

“As a father and husband, my job was to provide for them and give them a better life,” Davis said. “And I did that and I wouldn’t change anything about it.”

Now it’s time for his wife, family, and the fighters he hopes to take to another level in their careers. Boetsch is the most high-profile project at the moment, a fellow Maine native who Davis is carving back into a fighter nicknamed “The Barbarian.”

“Tim has to rely on that caveman-like instinct and be “The Barbarian” like they call him,” Davis explains. “When he first got into the UFC and did his first fight, he thought he had to become a better athlete and become this guy that needed to learn a bunch of techniques and become one of those athletic, pretty-looking fighters doing all that cool stuff. And that pulled him away from who he is. He’s more from the old school, the Igor Vovchanchyn type. He needs to go out there and just smash everybody he fights to pieces. He can’t be worried about how he looks and his technique. This fight is for him to go out there, get in this kid’s face and turn this fight into an absolute ugly dogfight. We need the fighter who stepped into the UFC and smashed David Heath apart. I’m making this fight personal. He’s got to go in there pissed off and turn this into a fight. And if Tim is on this guy and doesn’t give him a chance to breathe, that’s how he’s going to win this fight.”

Davis takes a breath to let that all sink in. This isn’t just a way to pass the time, and he is no towel holder. He’s coaching all aspects of the game, mental and physical, and he couldn’t be happier.

“I love it,” he laughs, and it’s obvious that he does. It’s not the only thing keeping him busy though. He’s done plenty of radio shows over the last couple years, he may do some more in the future, and he also has a commentating gig in Ireland lined up. Yet no matter what he does, at heart he will always be a fighter, and the epitome of the type of fighter you find in New England.

“Where I was born, up in Houlton, they start school late because kids gotta pick potatoes,” Davis explains. “And I remember that when I was an amateur boxer, I was over in Arizona, and I lived there for four to six months. People would hear my accent, I said I was from Maine, and they would say ‘Maine people are such hard workers.’ I think that’s what New Englanders are really known for – they’re hard workers. And the way of life in New England is not an easy life. There’s not a lot of money here, and you’ve got a harsher way of life as far as just the weather. Mother Nature’s against you here, and the best job you can have in New England is being a weatherperson because you don’t have to be right, ever. (Laughs) So New England fighters don’t look for the magic technique or the quick fix. They’re going to take the hard route. They’re going to take their licks, work as hard as they can, fight in the crappiest places until they get noticed, and when I think of New England fighters, that’s what I think of.”

It’s what you think of when you hear the name Marcus Davis. And on Saturday night, he’ll make that walk to the Octagon again.

“I’ve visualized myself walking with Tim down to that cage, and I get butterflies when I just think about it,” he said. “I used to tell people how tough I was that by the time I was in my 20s I had only cried five times in my life. (Laughs) Now that I’m 40, having four kids and a wife and the ups and downs, I couldn’t tell you how many times I’ve cried now, but that night, I might shed a tear walking down to the Octagon knowing that it’s kind of come full circle.”