The Different Layers To Bryan Barberena

He lives on a farm outside of Knoxville, Tennessee and spends time with his girls and wife when he isn’t in North Carolina training. Barberena is also the type of guy to walk out to the Octagon to “Baby Shark.”
By Gavin Porter • Jun. 20, 2019

Growing up, Bryan Barberena’s goal was to stay out of fights. And if you knew him outside of the Octagon you’d probably be surprised to find out he is a professional fighter.

The smiley, go-lucky father of three happily rocks painted fingernails every fight week as a reminder of what he is fighting for. He lives on a farm outside of Knoxville, Tennessee and spends time with his girls and wife when he isn’t in North Carolina training. Barberena is also the type of guy to walk out to the Octagon to “Baby Shark.”

Underneath all that is a fierce competitor there to prove that he’s the better man. Punch by punch and kick by kick.

“It’s the competition. I love going in there [the Octagon] and finding out who’s the better man that night,” Barberena said. “All the tools we have, putting them together. Personally I love to stand-up and strike. I love to throw hands get in there and make it dirty and have a war or blood bath. That’s fine with me I love that.”

It’s that mentality and pure heart that has helped Barberena earn a reputation as one of the toughest guys in the welterweight division. A prime example can be found in his UFC Phoenix battle with ranked Vicente Luque. In what is without question one of the best fights of the year so far, “Bam Bam” and Luque traded for three solid rounds in a thrilling showcase of determination and skill.

Barberena looks to bring that type of performance to every fight, not only to put on a show for the fans, but simply because he thinks it’s fun.

“I like to stand-up throw hands and bang and put on a show for the fans,” Barberena said. “I enjoy it quite a bit. I’m just going to keep doing that and hopefully keep putting on exciting fights for the fans and get some exciting finishes as well.”

One of the things that radiates from Barberena is his quiet yet humble confidence. He believes that his evolution as a fighter has been exactly what he needs to take the next step as a mixed martial artist.

“If you think you’ve seen improvement now, from before, I think it’s just getting even greater and I think I’m only getting better and better every time,” Barberena said. “I feel like I’ve improved so much just from my last fight and that wasn’t even that long ago.”

Barberena was quick to credit his change in lifestyle, mentality, training techniques and surrounds [the farm] for his recent strides. This has helped him reach what he described as a new level of “peace” that allows him to better execute in the Octagon.

That has to be a scary thought for the rest of the welterweight division, including Barberena’s UFC Greenville opponent Randy Brown.

“I don’t want to beat a half Randy Brown. I want to beat the best Randy Brown that there is,” Barberena said. “I don’t expect him to stand on the feet with me very long. I expect him to try to shoot for take downs and I expect him to try to mix up and try to throw me off what I want to. But little does he know, he doesn’t know what I want to do because of course yeah I want to stand-up but I have some tricks, I have some things up my sleeve. You never know. But I’ll be looking to keep this on the feet and put him away early. I don’t see this going past the second round.” 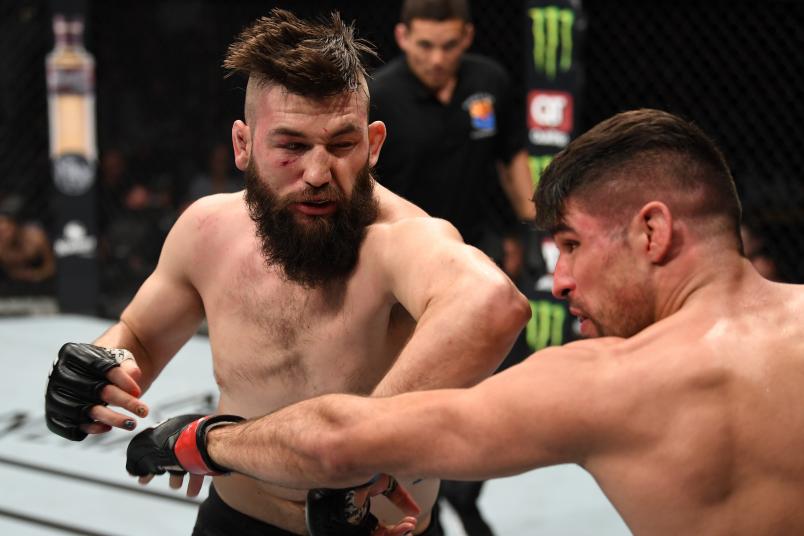 Barberena is well aware of just how important this fight is. He’s coming off a loss and in order to move up the pecking order and provide for his family he has to take Brown out.

And he plans to do it in dominate fashion.

Make sure to tune in and watch Barberena take on Brown in what is shaping up to be an awesome welterweight showdown.