It was just another Saturday for Ashley Yoder until she got a call asking if she wanted to get into a fistfight with Angela Hill in a week.

“That sounds great,” responded Yoder, noting that she didn’t find out about the “in a week” part until the next call a few minutes later. That didn’t change her mind.

“I thought, well, I know I can make the weight. My thing is just making sure my gas tank was good. You know what, I train all the time and my coach really has faith in me. He really pushed me to believe that this is the fight, this is what you need, this is a great rematch for you, you don't need time to think and doubt yourself. Just go in there and do what you do. So that's what we're doing.”

Saturday’s bout at the UFC APEX in Las Vegas is a rematch of a July 2017 bout won by Hill via unanimous decision, yet despite Yoder wanting to even the score with “Overkill,” there’s no bad blood in this strawweight matchup, and no, Yoder hasn’t had a picture of Hill on her mirror for the last three years, plotting revenge Rocky style. 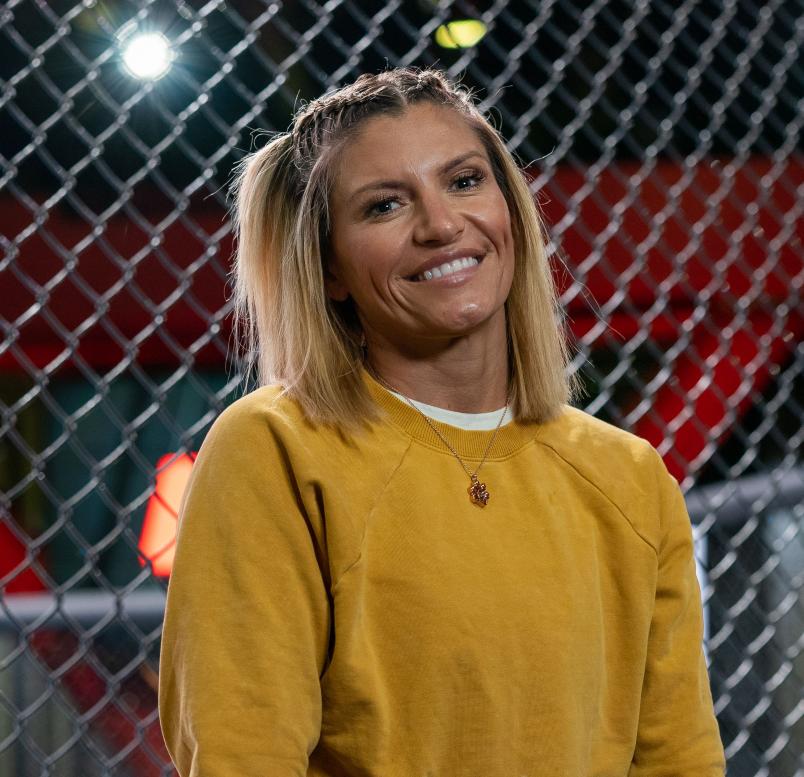 “I have so much respect for Angela,” said Yoder. “Her living in San Diego, me in Temecula, there's not a lot of little people of high quality that we can train with. So we've talked a couple times about possibly training together and it just never actually came into existence. But, at the same time, I think there's enough respect to understand that we're in the fight game, we're not friends in the sense of ‘Hey, girl, what are you doing this weekend?’ And I think we've both grown in so many ways. Four years ago was a long time, so I think it's a great rematch for the fans. It doesn't really do much for her, but it does a lot for me, so I'm excited.”

Hill has gone through her ups and downs in the time since their first meeting, but beginning in 2019, she hit her stride and won three in a row, with the only losses since then being controversial decision defeats to Claudia Gadelha and Michelle Waterson. At the moment, she sits at the number 12 spot in the 115-pound rankings, leaving this as a high-risk matchup with Yoder this weekend.

As for the Indiana-born “Spider Monkey,” Yoder has also had her share of losses and disputed decisions going against her, and while the Hill fight wasn’t one of those, she does admit that going into that first bout, she wasn’t close to being where she is now.

“I was in a really weird place going into that fight,” said Yoder. “I was in between training at a lot of other places and it's really funny because going into that fight, mentally, I was not ready. Physically, yes. I had trained and did my part there, but stepping into that cage, I didn't feel like the Ashley I should have felt like. I didn't feel like I was in my own element. It was very forced and it wasn't as natural. It was a really bad feeling. It wasn't the worst fight I've ever had but it wasn't the best fight I've ever had. There were some good things to take away from that fight, there was also a lot of learning to take away from that fight that I needed to work on.” 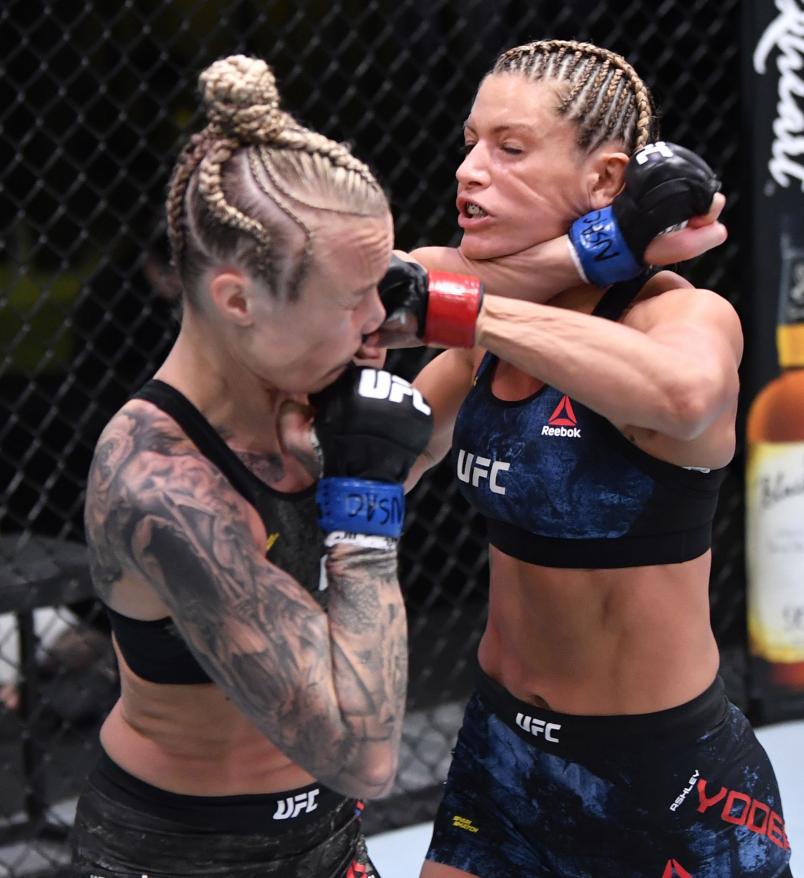 The one thing she truly focused on was the mental side of the game, something that improved even more after she hired a mental coach last August.

“He said you're doing everything on the physical side correct; you're completely lacking on the mental side,” Yoder said. “Going through the mental reps is just as important as the physical reps. And nothing hit me as hard as that truth.”

With that squared away, and evident in her November win over Miranda Granger, Yoder is now able to mesh her mental game with the physical tools that also earned her UFC wins over Amanda Cooper and Syuri Kondo. Even when she’s lost, she’s never been out of a fight and has never been finished, but as she found out, having a well-rounded game means more than having good skills in a fight.

“In interviews after that first fight I was talking about how it was a blessing that I even stepped into that cage that night,” Yoder said. “I had one thing after another just going wrong, there was a lot on my mind and my mental state was very, very fragile at that time. I think from that point on, in getting this fight again, I feel like I'm in such a different place, I've grown so much. My jiu-jitsu's come along a lot more, my wrestling's come along a lot more, my striking's better and she's grown too, but I just feel like I'm all-around a better Ashley and I'm going into this fight with no pressure.”

As for the mental side of things… 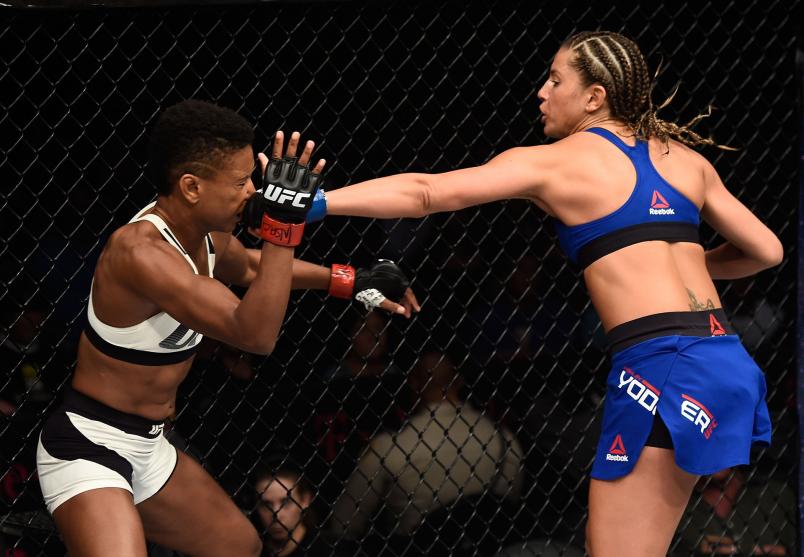 “It's so important,” she said. “It's equally important, if not more important than the physical side because if your mentality is that you're unbreakable and you're going in with confidence, your body will naturally step up. This is what I believe. Other people can have science and things like that, that go against what I'm saying, but in my heart, I truly believe if you're in the mental space that you can handle anything, your body's gonna do some crazy s**t and step up to the plate for you to be able to be successful.”

Some studies in sports science back up Yoder’s beliefs, but with an addendum that just believing it and wanting it isn’t enough. As much work as an athlete puts into the physical side of training, the brain has to be worked just as hard.

“I'm at the gym more than anyone,” said the Team Quest standout. “The only other person that works as hard as me is Sam Alvey. We're in the gym, training, training, training. And people say your confidence comes in the fact that you did everything that you could. And in my mind, that's definitely a part of it, but you have to be training the mental side of it - the mental imagery, the meditation, the days of rest and realizing that we're not just robots and can just push our bodies to the limits every single day, because if you're going into a practice tired or broken from being beat down the last practice, you're not gonna be able to give the 110 percent that you need to give. And then what's that doing for your confidence? It's not making it better; you're just getting another beatdown. So working with this mental coach, he really pushed that on me.”

And now, Ashley Yoder is a complete fighter and a completely different one from the fighter she was the first time around with Angela Hill. On Saturday, she gets to prove it.