"I know that once that 15 minutes is over, I’m gonna walk out and be able to say I gave it everything that I had." - Diego Sanchez 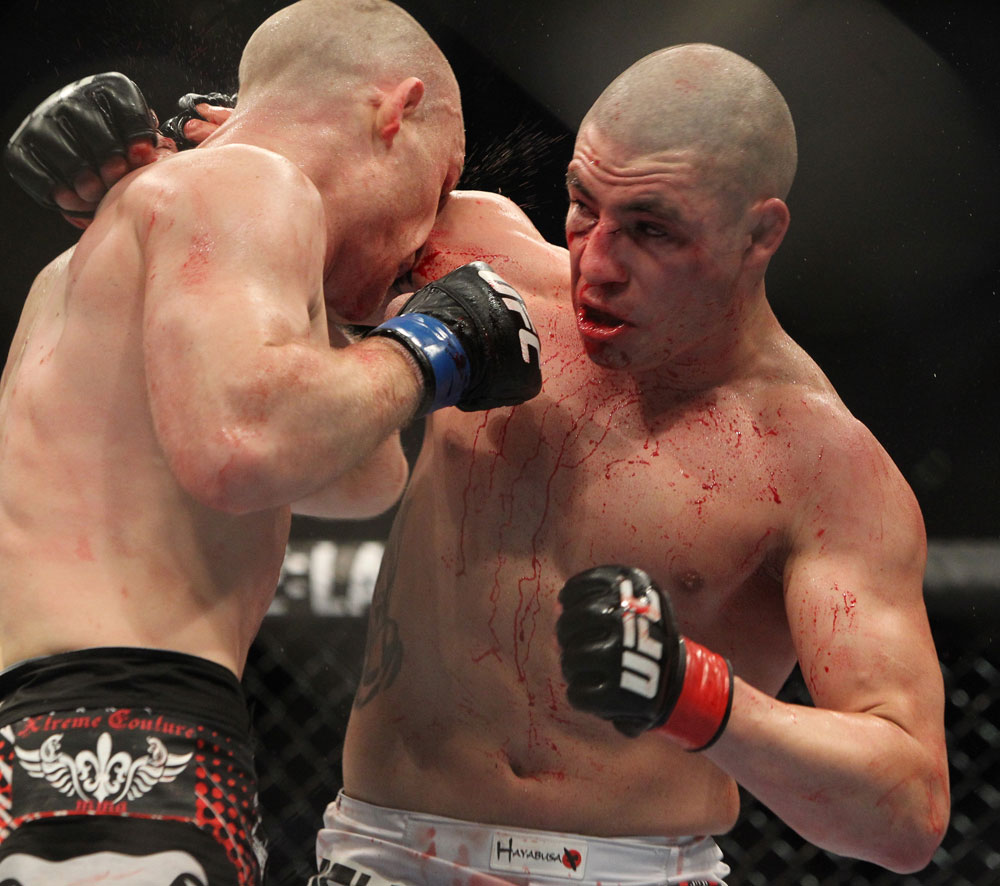 Welterweight contender Martin Kampmann goes by the nickname “The Hitman,” but you might as well have changed that to “The Surgeon” the way he carved up Diego Sanchez in the first round of their March 2011 bout. Battered and bloodied, Sanchez returned to his corner at the bell, and for 95% of the fighters out there, that first five minutes would have been cause for severe concern.

Sanchez is part of that 5% that would squint through the blood covering his face, sneer at his opponent across the Octagon, and dare him to do what he just did again. And the way he describes it, that 60 seconds between rounds in Louisville was his most defining moment.

“My absolute favorite moment of my career was in that Martin Kampmann fight going into that second round because that was the moment I flicked the switch,” said Sanchez. “This is a weird switch, I don’t know if all fighters got this switch, but I know that I found it in that fight. I found a switch that says, you know what, I don’t have no regard for my face right now. I could care less about what’s going on right now, but I truly have one thing in mind, and that’s to take out my opponent. At that moment, I’m a vicious warrior and I’m gonna try to take this person out anyway I can. And I just had to make it into a street fight.”

That’s just what Sanchez did, and over the next two rounds, he took the fight to Kampmann, showing no regard for strategy or his well-being, and he brawled his way to a razor-thin 29-28 win on all three judges’ scorecards. The fight, one of 2011’s best, not only took Fight of the Night honors, but Sanchez and Kampmann each received a $160,000 bonus check for their efforts.

It almost never happened though, because if Sanchez’ gameplan would have been successful, it could have been an entirely different fight. Luckily for everyone watching, Sanchez didn’t have a Plan B when Plan A didn’t work. But he guarantees that won’t happen again.

“With that victory I had one of the most crucial learning experiences of my career, and that was that I could never ever go into a fight not sharp on my striking,” he said. “For that fight I didn’t hit mitts with (striking coach Mike) Winkeljohn once, and I didn’t even go as far as punching a bag once. All I did was wrestle, wrestle, wrestle, and I had it in my mind that no matter what this guy tries to do, I’m gonna take him down and I’m gonna win the fight. But he knew that, and I gave him the opportunity to hit me with knees while defending the shot. And I learned. I got a really strong iron jaw, and a big heart, and I need to use that to my advantage and I need to fight with my hands. I need to be sharp with my striking and go in there as a striker first and if a takedown presents itself it presents itself. For the rest of my career, I will always go into a fight as striker first because the fight starts on the feet.”

That could be a problem going into Wednesday’s UFC on FUEL main event against Jake Ellenberger, perhaps the hardest puncher in the UFC’s welterweight division. If you’re not on top of your striking game, “The Juggernaut” can make it a short night for you. Even if you are, if he lands one on the button, it’s usually lights out. That’s not even mentioning the fact that Sanchez has gotten cut pretty badly in his fights against Kampmann and BJ Penn, and sometimes, judges can score the blood and not the fight.

“None of that concerns me because I was blessed and I have completely and totally recovered from these cuts,” said Sanchez. “I don’t have scar tissue, and it’s amazing. You guys are gonna see me and I don’t even have scars. It was a miracle. I was healed, I didn’t have plastic surgery, but just by using oils, and massaging, and trusting in God that he was gonna heal me, I have become totally healed from those cuts. I’m a warrior and I have my war wounds, and now I’m just going in to fight differently. I’m still evolving and still getting better as a striker.”

Sanchez’ attitude should come as no surprise to anyone who has followed his career over the years. Always precocious, “The Dream” is supremely confident but also willing to back up his words, and his performances – win or lose – have proved it. Remember, this is the same kid from Albuquerque who said with a laugh “at 20 years old, the only thing I knew was grab that bottle of Ibuprofen and train.” And while he’s had his moments of quirkiness (who can ever forget the “Yes” cartwheel?), when it comes time to fight, he’s locked in and ready to go.

But after healing his cuts, Sanchez still wasn’t going to be able to do what he loves, as a broken right hand scrapped a highly-anticipated UFC 135 bout with Hall of Famer Matt Hughes last September.

“I was excited for the Matt Hughes fight and I was extremely ready for that fight,” he said. “I was ready in all aspects of my game, I was really ready to go in there and fight and then I broke my hand and I had to be on the shelf. But now here it is, 11 months later since I fought and I just trust in God that everything happens for a reason, and that this is my time.”

The injury couldn’t have come at a worse time, as Sanchez was coming off two consecutive Fight of the Night wins (over Kampmann and Paulo Thiago) and the Hughes bout was going to be a high-profile co-main event on Pay-Per-View. It wasn’t to be though, and Sanchez is philosophical about the whole ordeal.

“It was probably the first time in my whole career where I was doing everything right,” he said. “I was living right and everything was just harmonized perfect, so when the injury happened, I just took it as a blessing in disguise and I accepted it with positivity. That was a major challenge for me. But it actually turned out better for me because now I’m fighting a guy in Jake Ellenberger who is recognized as one of the best guys in the division. There’s plenty of tough guys in my division, but I look at him as one of the top one or two in the division.”

Ellenberger enters tomorrow’s bout with a five fight winning streak with four of those wins coming by knockout. It’s a daunting task for Sanchez, or at least you would assume it is, but this is one fighter who refuses to walk down the same path as most.

“I know that on February 15th when they lock the door and it’s just me and Jake in there, nothing that I will have said will matter, and it’s just gonna be me and him in there, and I know that once that 15 minutes is over, I’m gonna walk out and be able to say I gave it everything that I had,” said Sanchez, and what more can you ask from any fighter? Maybe for all the “Yes” cartwheels and craziness over the years, he’s the guy who “gets it” more than anyone. It wasn’t an overnight process, but it is one he began two years before most people have that life evaluation talk with themselves at 30.

“I was probably one of the wild children of MMA,” he said. “It’s no secret that I had a problem with the partying and the drinking, and that was a part of my career when I was a young bachelor and I was wild. It affected me dramatically. It affected me in my fight performances, and I was never truly at a hundred percent, so when I turned 28, I remember the clock ticked over - and I was born on New Year’s Eve, so the year ends - and I’m like ‘all right, I’m gonna be 30 in just two years. Man, I better get my stuff together right now.’ I want to be the guy at 30 years old saying ‘well, I got myself together,’ or at least I’m doing okay. I don’t want to be the guy at 30 years old saying I need to get my stuff together. I got a head start, things are good, married life is awesome and I’m in a whole different state of mind.”

Now all he has to do if fight. And for him, that’s always been the part he never had an issue with.